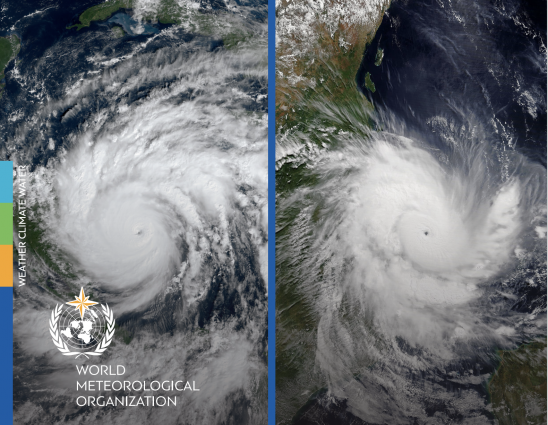 Every year, there are on average 84 named tropical cyclones. Over the past 50 years, they have caused on average 43 deaths and US$ 78 million losses every day and have also been responsible for one third of both deaths and economic losses from weather-, climate- and water-related disasters, according to WMO statistics from 1970-2019.

But the death toll has fallen dramatically thanks to improvements in forecasting, warning and disaster risk reduction which lie at the heart of the acclaimed WMO Tropical Cyclone Programme.

A Review for the 40 Years of the Tropical Cyclone Programme (1980-2020) has been published just ahead of World Meteorological Day on 23 March 2022 to highlight its theme of Early Warning and Early Action.

"The TCP coordination has cemented the links between WMO Members large and small, developed or least developed, in tropical cyclone prone regions to take joint and well orchestrated actions to mitigate the impacts of tropical cyclones. Thanks to the regional institutional frameworks implemented by the TCP, death tolls in the tens of thousands due to a single tropical cyclone are a thing of the past,” said WMO Secretary-General Prof. Petteri Taalas in a foreword to the Review.

"After 40 years of steady progress and development, the TCP mission remains the same: to reduce loss of lives and damage to property and to build resilience in face of tropical cyclones. In so doing, the TCP contributes to sustainable development and to achieving the targets of the Sendai Framework for Disaster Risk Reduction). The challenges that lie ahead due to climate change make the TCP ever more relevant today, " said Prof. Taalas.

The TCP was established in response to the death and devastation left in the wake of many tropical cyclones – such as Tropical Cyclone Bhola in 1970 which killed an estimated 500,000 people in present day Bangladesh and prompted international calls at the United Nations General Assembly to find ways and means to mitigate the harmful effects of tropical cyclones.

Enormous successes have been achieved in operational services, notably:

• A steady trend of decrease in tropical cyclone track forecast errors: today the five-day track forecast is as accurate as that the two-day forecast thirty years ago.

• Storm surge information is available in Regional Specialized Meteorological Centre (RSMC) advisory bulletins which are accessible through dedicated websites of those RSMCs covering all ocean basins prone to tropical cyclones.

• Monitoring of tropical cyclones round the clock and over the globe, with constellations of satellites supported by satellite operating Members and partner organizations.

• All Members can provide regionally same level of quality tropical cyclone services to their people.

"After 40 years of implementation, thanks to achievements in monitoring, forecasting and warning capabilities combined with a new generation of technologies in disseminating forecasting and warning messages with appropriate national early warning mechanisms, huge death tolls as large as tens of thousands caused by a single tropical cyclone has become history. After having implemented the TCP for 40 years, a lesson learnt is that Members need to put in place a seamless early warning system, comprising the full spectrum of operational areas. This includes a response mechanism with multi-hazard configuration, enabling warning messages to reach the last mile and triggering appropriate reactions by people,” says the review.