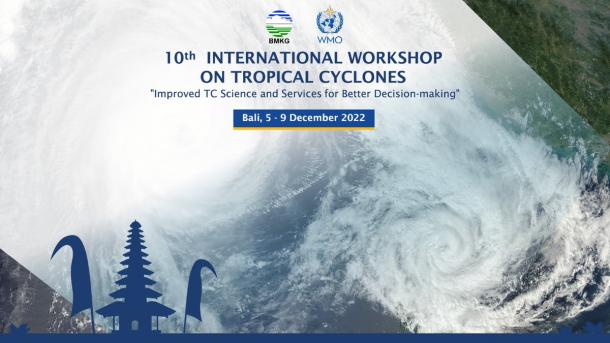 More than 120 tropical cyclone experts have taken part in an international conference, which brings together the forecasting and research communities every four years to share knowledge and strengthen coordination to save lives and livelihoods from a major hazard.

Tthe tenth session of the International Workshop on Tropical Cyclones took place in Bali from 5 to 9 December 2022, hosted by Indonesia’s national meteorological service BMKG. Its theme “Improved tropical cyclone science and services for better-decision making” reflects the need to optimize decisions and community action at every point along the end-to-end warning chain.

Tropical Cyclones  – also known as hurricanes and typhoons - are one of the biggest threats to life and property, with deadly hazards including storm surge, flooding, extreme winds, tornadoes and lightning. Between 1970 and 2019, more than 1 900 disasters have been attributed to tropical cyclones, which killed nearly 780 000 people and caused US$ 1 407.6 billion in economic losses, according to the WMO Atlas of Mortality and Economic Losses from Weather, Climate and Water Extremes.

Progress in forecasting and accurate early warnings has prevented much loss of life but much more remains to be done.

Saving lives and livelihoods is the core philosophy of the International Workshop on Tropical Cyclones. This is a unique gathering of researchers and forecasters from all regions affected by tropical cyclones. It was first held in 1985 and is sponsored by WMO’s Tropical Cyclone Programme and World Weather Research Programme.

The workshop meets a recognized need for better organization of the many and varied global activities related to observations, forecasting, research, and warning strategy. Through the years, it has effectively demonstrated the importance of sharing knowledge and coordination between all tropical cyclone specialty areas in order to minimize damage and loss of life.

The main objectives of the workshop are:

The workshop takes place in a year in which tropical cyclones again caused death and destruction in different parts of the globe.

The 2022 Atlantic hurricane season officially ended on November 30, but the impact of the most devastating storms will continue for many months to come.

In addition to the loss and damage witnessed in the Atlantic and Caribbean, powerful tropical hit Asia (including China, Japan, the Philippines and Viet Nam) in 2022. A succession of tropical cyclones rolled back sustainable development in the Indian Ocean Island of Madagascar.