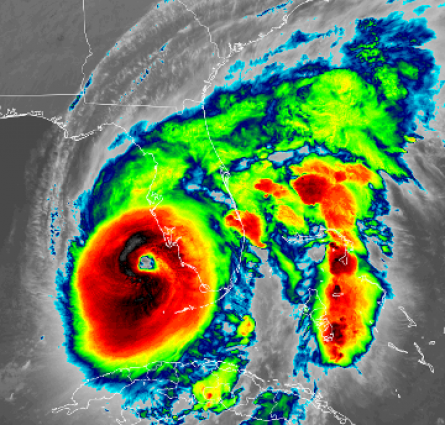 Two powerful tropical cyclones are bringing misery to millions in opposite parts of the world. Hurricane Ian has caused devastation in western Cuba and made landfall in the U.S. state of Florida as a strong Category 4 , with catastrophic storm surge, flooding and wind. Typhoon Noru underwent explosive intensification before it hit the Philippines and for a second time en route to Viet Nam.

The new tropical cyclones follow closely on the heels of Hurricane Fiona, which caused deadly flooding in the Caribbean and was the strongest hurricane on record to hit Canada, and Typhoon Nanmadol which prompted the evacuation of nine million people in Japan.

"In the space of two weeks, we have seen successive powerful tropical cyclones with devastating winds, extreme rainfall and flooding in densely populated parts of the world. Accurate early warnings and coordinated early action are proving key to limiting casualties, and the WMO community has undoubtedly saved many lives. But the human and socio-economic impacts of these cyclones will be felt for years. Our thoughts are with everyone affected,” said Cyrille Honoré, WMO Director of Disaster Risk Reduction and Public Services branch.

« Climate science is increasingly able to show that many of the extreme weather events that we are experiencing have become more likely and more intense due to human-induced climate change. We have seen this repeatedly this year, with tragic effect. It is more important than ever that we scale up action on early warning systems to build resilience to current and future climate risks in vulnerable communities,” said WMO Secretary-General Prof. Petteri Taalas.

Hurricane Ian hit western Cuba on 27 September and then strengthened and increased greatly in size over the warm waters of the Gulf of Mexico as it moved towards Florida. It made landfall on 28 September with sustained winds of 150 miles per hour (240 kmh) in a densely populated, low-lying residential area. It was described as one of the worst hurricanes to hit the area in a century.

There was no immediate word on casualties. But there was severe damage to infrastructure, housing, agriculture, electricity, transport and telecommunications services in both Cuba and Florida.

Both Cuba and Florida are world leaders in terms of hurricane preparedness and disaster management.

The US National Hurricane Center (WMO's RSMC Miami) warned of catastrophic wind damage and of life-threatening storm surge and catastrophic flooding associated with this large-size and extremely dangerous hurricane. 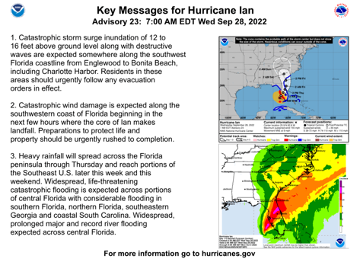 The combination of storm surge and the tide caused normally dry areas near the coast to be flooded by rising waters moving inland from the shoreline.  RSMC Miami warned that the water could reach up to 12 to 16 feet (3.5 to 4.8 meters) in the worst affected areas.

These including densely populated residential zones.

Heavy rainfall will spread across central and northern Florida through Thursday as it is forecasted to slow its forward motion. Ian is forecast to reach portions of the US Southeast later this week and this weekend (1-2 October). Catastrophic flooding is expected across portions of central Florida with considerable flooding in, northern Florida, south-eastern Georgia and coastal South Carolina.

On the basis of the forecasts from the National Hurricane Center, Florida governor Ron de Santis issued compulsory evacuation orders for the worst affected areas, mobilized medical and accommodation centers.

Like Cuba, Florida has long experience in coping with hurricanes and is extremely well prepared. However, Ian poses an exceptional threat because of its size, its strength and the location of its landfall.

Ian made landfall in the Cuban province of Pinar del Río province as a Category 3 hurricane, with sustained winds of 205km/h and even stronger gusts, according to WMO’s Regional Specialized Meterological Center (RSMC) Miami, which forecast Western Cuba would receive 6 to 12 inches (152 to 304 mm) of rainfall, with local maxima up to 16 inches (406 mm), leading to flash flooding and mudslides. It is estimated that more than 3 million people have been affected, according to the UN Resident Coordinators Office.

Cuban President Miguel Díaz Canel said that the damages left by Hurricane Ian are likely significant, though only preliminary assessments have been carried out.

Typhoon Noru, known in the Philippines as Karding, saw an “explosive” intensification on 24 September and hit the northeastern part of the Philippines on 25 September as a “super typhoon” with sustained winds of 195 km/h (121 mph) before tracking across the main island of Luzon on 25 September. The Philippines national meteorological and hydrological service, DOST-PAGASA, raised the Tropical Cyclone Wind Signal (TCWS) no. 5 – the strongest TCWS that can be issued.

More than 2 million people live in the worst affected area, according to a disaster analysis, and nearly 430,000 people were directly impacted. Despite the relatively short space of time for mobilization, thousands of people were evacuated, thus limiting loss of life. 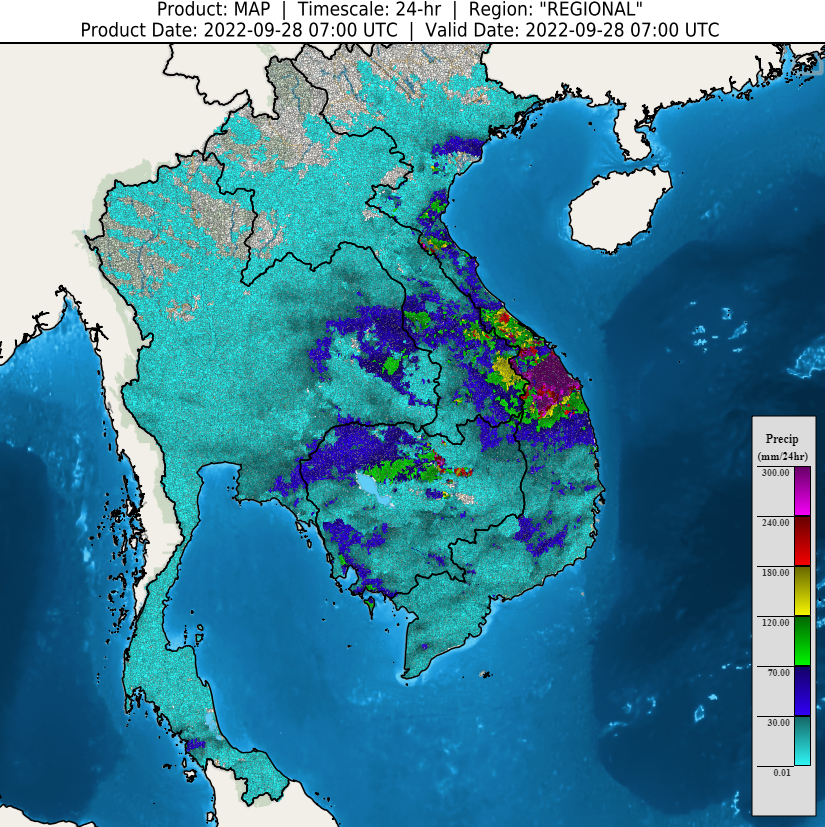 From 26-27 September, typhoon Noru made its way towards Viet Nam, and intensified once again. The National Center for Hydrometeorological Forecasting (NCHMF) said it made landfall in the Da NangQuang Ngai area, with the strongest wind in the area near the centre of the storm was measured at 134-166 km/h equivalent to a Category 2 Hurricane on the SaffirSimpson Scale. The strong winds extend outwards about 250km from the center of the storm and the strongest winds about 100km.

Total rainfall in 24 hours (from 7h00 UTC 27 Sep 2022 to 7h00 UTC 28 Sep 2022) at many stations is greater than 200mm, and rainfall at several stations is higher than 400mm, according to the South East Asia Flash Flood Guidance System regional centre operated by the Viet Nam Meteorological and Hydrological Administration.
The Viet Nam Disaster Management Authority held the Disaster Risk Reduction Partnership (DRRP) meeting to mobilize evacuations and emergency relief. On the basis of the warnings, the UN Food and Agricultural Organization activated its anticipatory action protocol to protect livelihoods and food security ahead of the event. The FAO team distributed cash and waterproof drums to store food and agricultural assets (e.g., seeds, tools) to communities expected to be affected. It is also assisting them in moving their livestock to locations safe from typhoon-induced flooding.