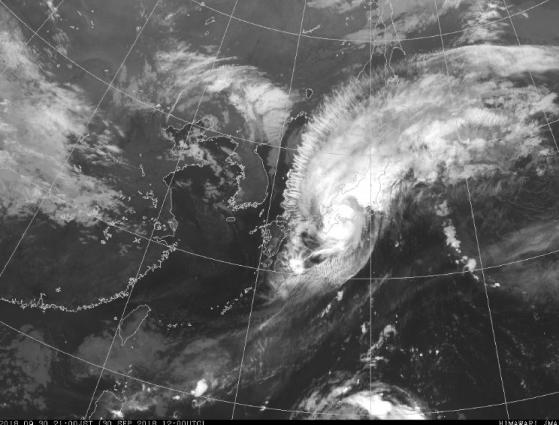 Trami, the 24th typhoon of the year, has caused severe damage  in many parts of Japan, leaving casualties and disrupting transport and energy.

It is the latest in a series of weather disasters to hit the country after devastating floods, a deadly heatwave, and the strongest typhoon in 25 years (Jebi). The 25th typhoon, Kong-rey, is following Trami and approaching the southern islands of Okinawa as Trami did.

JMA has provided accurate and regular warnings throughout the extreme weather, but the succession and scale of the disasters has severely strained Japan’s coping mechanisms.

It hit the southern islands of Okinawa, before moving on to western Japan and making landfall near Osaka, with dangerous winds, heavy rains, high waves and storm surge, causing the cancellation of trains and flights as it moved up through the country, also bringing the capital Tokyo to a standstill.

Trami brought more than 400 mm of total rainfall to regions of Japan which were hit by devastating floods in July and soaked by Jebi. JMA warned of the risk of landslides and flooding.

The start of the 2018 General Assembly of the Stratospheric-tropospheric Processes and their Role in Climate (SPARC) was one of the many conferences affected by the severe disruptions. SPARC is core project of the World Climate Research Programme and involves nearly 400 climate experts from around the world. The General Assembly comprises 5 days of discussions on a range of climate issues including extreme weather events. It finally opened Monday after a long delay.

700 participants in Takamatsu, Kagawa. Delegates at the joint 14th Quadrennial Symposium of the international Commission on Atmospheric Chemistry and Global Pollution (iCACGP) and the 15th Science Conference of the International Global Atmospheric Chemistry (IGAC) Project escaped the worst force of the storm but a number had to delay their departure because of disruption to flights.