UN chief: this is a moment of truth for people and planet 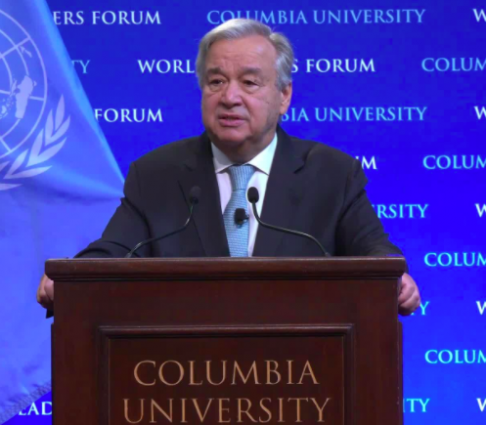 UN chief: this is a moment of truth for people and planet

UN Secretary-General António Guterres  delivered a landmark speech on the state of the planet at Columbia University in New York on 2 December,  setting the stage for dramatically scaled-up ambition on climate change over the coming year.

Mr Guterres drew heavily from WMO’s provisional report on the State of the Global Climate and a separate “Production Gap” report from the United Nations Environment Programme, which states that to limit temperature rise to 1.5-degrees Celsius as set out in the Paris Climate Change Agreement, the world needs to decrease fossil fuel production by roughly 6% every year between now and 2030.

“Making peace with nature is the defining task of the 21st century. It must be the top, top priority for everyone, everywhere,” said Mr Guterres.

The U.N. Secretary-General highlighted some of the key findings of WMO’s State of the Global Climate report, which was released at a press conference by WMO Secretary-General Prof. Petteri Taalas and received global media coverage.

2020 is on track to be one of the three warmest years on record globally – even with the cooling effect of this year’s La Nina, according to the WMO report.

Other highlights of the report - which combines input from UN agencies, National Meteorological and Hydrological Services and many experts - cited by Mr Guterres included:

“Meanwhile, climate policies have yet to rise to the challenge, “ said Mr Guterres. “Emissions are 62 per cent higher now than when international climate negotiations began in 1990.

“Every tenth of a degree of warming matters. Today, we are at 1.2 degrees of warming and already witnessing unprecedented climate extremes and volatility in every region and on every continent. We are headed for a thundering temperature rise of 3 to 5 degrees Celsius this century,” he said.

“The science is crystal clear: to limit temperature rise to 1.5-degrees Celsius above pre-industrial levels, the world needs to decrease fossil fuel production by roughly 6 per cent every year between now and 2030,” said Mr Guterres.

Mr. Guterres said he also saw hope, and pointed to the many solutions already within reach to solve the present crisis. He spoke of the COVID pandemic as presenting an opportunity: “COVID recovery and our planet’s repair can be two sides of the same coin,” adding that it was time to flick the “green switch.”

He said the international community has a chance to not simply reset the world economy, but to transform it to a sustainable one driven by renewable energy that will create new jobs, cleaner infrastructure and a resilient future.

Mr. Guterres cited three imperatives in addressing the climate crisis: First, achieving global carbon neutrality within the next three decades. Second, aligning global finance behind the Paris Agreement. Third, delivering a breakthrough on adaptation to protect the world – and especially the most vulnerable people and countries -- from climate impacts.

This is a “moment of truth for people and planet alike”, he said, where the global community must take a collective step towards a safer, more sustainable and equitable path, with the Sustainable Development Goals and the Paris Agreement on climate change as a blueprint.

Details of the UN Secretary-General’s speech are here