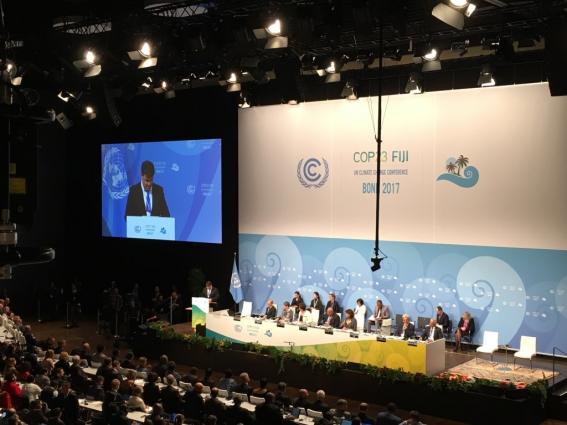 The United Nations Climate Conference (COP23) wrapped up on 17 November after two weeks of deliberations on implementation of the Paris Agreement on climate change. In addition to national governments, cities and local state actors renewed their commitment to climate action.

Throughout the conference in Bonn, Germany, the World Meteorological Organization provided scientific input through presentations and side events.

For the first time ever, WMO made a presentation at the opening ceremony of the climate change conference on levels of greenhouse gases in the atmosphere and the state of the climate.

“The role of the World Meteorological Organization is to provide you with the latest and best data and information on the state of the climate, and the impact of human activities,” WMO Secretary-General Petteri Taalas told delegates.

Greenhouse gas concentrations in the atmosphere reached yet a new record in 2018, committing the planet to further warming for at least the next 50 years, said Mr Taalas. The year 2017 is set to be one of the three warmest on record, with many weather extreme events that have had huge socio-economic impacts.

At the rate of current CO2 emissions, temperatures may increase by 3°C and 5°C by the end of the century, he said. The Paris Agreement calls on countries to combat climate change by limiting the rise of global temperature below 2 °C and strive not to exceed 1.5°C.

The Conference was chaired by Fiji, an island State particularly affected by the impacts of climate change. The Fiji Presidency announced an agreement on a Gender Action Plan, highlighting the role of women in climate action.

Several new climate action commitments and partnerships were announced by States and non-State actors in the areas of energy, water, agriculture, oceans and coastal areas, human settlements, transportation, industry, and forests. Climate finance and climate resilience were also at the center of the discussions at the conference.

One of the new initiatives aims to provide insurance to hundreds of millions of vulnerable people by 2020 and to increase the resilience of developing countries against the impacts of climate change. The ‘InsuResilience’ Global Partnership is a major scaling-up of an initiative started by the G7 in 2015 under the German Presidency.

The Ocean Pathway Partnership was launched. It aims by 2020 to strengthen action and funding that links climate change action with healthy oceans including through the UN Climate Change process and via more explicit aims and ambitions in national climate action plans.

The Conference took place one year after the entry into force of the Paris Agreement. The Agreement calls on countries to combat climate change by limiting the rise of global temperature below 2 degrees Celsius and strive not to exceed 1.5 degrees Celsius. Today, 170 Parties have ratified the treaty.

COP23 will be followed by a series of summits and conferences on climate change which are scheduled ahead of the UN Climate Summit in September 2019, including the ‘One Planet summit’ to be convened by France next month and focusing on financing, a gathering in California, bringing together non-State actors, and the COP24 in Katowice, Poland, in December 2018. Brazil has offered to host COP25 in 2019.

Underpinning its support for the climate change negotiating process, WMO signed an agreement with UNFCC secretariat to boost cooperation in a number of important areas. These include research and evidence to support climate policy-making and climate-smart investment, and technical cooperation to improve climate products and services for mitigation and adaptation action.

WMO spearheaded a UN side event on supporting adaptation and mitigation under the Paris Agreement on the opening day of COP23.

WMO and the UN Environment Programme co-hosted events in support of the work of the IPCC, which next year publishes a special report on “the impacts of global warming of 1.5ºC above pre-industrial levels and related global greenhouse gas emission pathways, in the context of strengthening the global response to the threat of climate change, sustainable development, and efforts to eradicate poverty.”

Integrated observations for mitigation and adaptation and practical support to parties was presented by the Global Climate Observing System and the Group on Earth Observation and the Remote Sensing Technology Center of Japan.

WMO’s co-sponsored World Climate Research Programme (WCRP) was one of the organizers of a science event on “Where and when habitability limits of the Earth will be reached due to climate change?"
Speakers presented scientific progress in exploring and understanding the impact of climate change to the human and natural environment, particularly those may exceed the limits of habitability.  Discussions focussed on the socio-economic implications of climate extremes and associated risks to human health, ecosystem, land transport networks and ocean / marine biology.

Participants emphasised that science should be widely communicated not only to decision makers but also to public on the limit to adaptation measures and habitability (human health, ecosystem, economy, etc.).

COP23 hosted thematic action days. Water Action Day highlighted that water is the commodity most impacted by climate change. Water information is important for mitigation and water management is key for adaptation. WMO stressed its readiness to partner with countries to improve the state of water knowledge and to make sure that water management supports national adaptation plans in the best possible way.

'Oceans and climate: A resilient ocean for future generations' side event focussed on the intimate links between the atmosphere and oceans in the climate system and WMO's role in promoting this through joint work on ocean acidification and common standards of measurements between communities being spearheaded by the Global Atmosphere Watch network. Ocean Action Day highlighted progress on the most pressing topics in relation to oceans and climate change.

CREWS aims to mobilize US$100 million by 2020 to save lives and support sustainable development in vulnerable countries in Africa and the Pacific and Caribbean.

“In the Paris Agreement era, it is unacceptable that populations are not forewarned of an impending weather disaster. Let us now reinforce support for CREWS, launched in Paris at COP21, to enable the most vulnerable to benefit from effective early warning systems” said Mr Hulot.

CREWS and WMO were among the supporters of a Global Island Partnership High Level Event, highlighting the reality of climate change in Pacific and Caribbean islands, and efforts to increase resilience.

“The voyage to a resilient and sustainable future is not one that is taken alone, but by a movement of cities, states, islands and countries working together to shape the future we want,” according to Tommy E. Remengesau Jr., President of Palau.