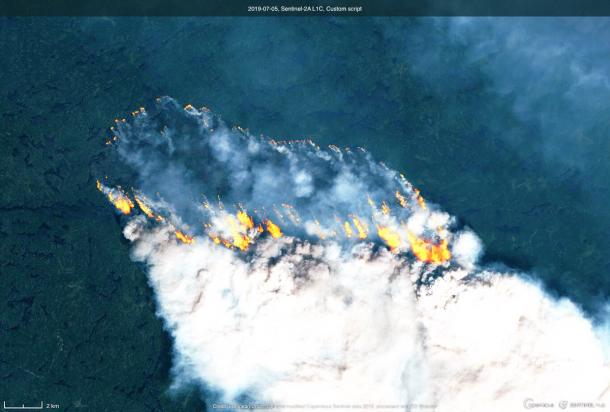 Unusually hot and dry conditions in parts of the northern hemisphere have been conducive to fires raging from the Mediterranean to – in particular – the Arctic. Climate change, with rising temperatures and shifts in precipitation patterns, is amplifying the risk of wildfires and prolonging the season.

WMO’s Global Atmosphere Watch Programme has released a short animation which highlights the risks and explains how advances in satellite technology make it possible to detect and monitor fire dangers. Improving forecasting systems is important for predictions and warnings around fire danger and related air pollution hazards.

In addition to the direct threat from burning, wildfires also release harmful pollutants including particulate matter and toxic gases such as carbon monoxide, nitrogen oxides, and non-methane organic compounds into the atmosphere.

Particles and gases from burning biomass can be carried over long distances, affecting air quality in regions far away.

Since the start of June, the Copernicus Atmosphere Monitoring Service (CAMS) has tracked over 100 intense and long-lived wildfires in the Arctic Circle. In June alone, these fires emitted 50 megatonnes of carbon dioxide into the atmosphere, which is equivalent to Sweden’s total annual emissions. This is more than was released by Arctic fires in the same month between 2010 and 2018 combined.

Although wildfires are common in the northern hemisphere between May and October, the latitude and intensity of these fires, as well as the length of time that they have been burning for, has been particularly unusual, according to CAMS Senior Scientist and wildfires expert, Mark Parrington.

The ongoing Arctic fires have been most severe in Alaska and Siberia, where some have been large enough to cover almost 100 000 football pitches, or the whole of Lanzarote. In Alberta, Canada, one fire is estimated to have been bigger than 300 000 pitches. In Alaska alone, CAMS has registered almost 400 wildfires this year, with new ones igniting every day.

The average June temperature in the parts of Siberia where wildfires are raging, was almost ten degrees higher than the 1981–2010 long-term 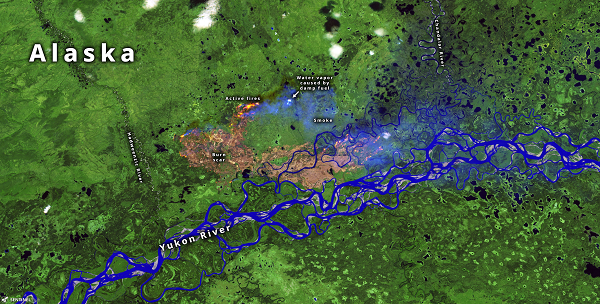 Temperatures in Alaska hit record highs of up to 90°F (32°C) in Alaska on 4 July, fuelling fires in the state, including along the Yukon River along the Arctic Circle. In Canada, smoke from massive wildfires near Ontario are producing large amounts of particulate matter, affecting air quality. The heatwave in Europe at the end of June also triggered wildfires in a number of countries, including Germany, Greece and Spain.

CAMS, which is implemented by the European Centre for Medium-Range Weather Forecasts (ECMWF) on behalf of the EU, incorporates observations of wildfires from the MODIS instruments on NASA’s Terra and Aqua satellites into its Global Fire Assimilation System (GFAS) to monitor the fires and estimate the emission of pollutants from them. It assimilates fire radiative power observations from satellite-based sensors to produce daily estimates of biomass burning emissions which are part of the extensive measurements performed by many stations of the Global Atmosphere Watch (GAW) Programme. These measurements are essential for forecasts, research on atmospheric composition and to develop warning systems.

The northern part of the world is warming faster than the planet as a whole. That heat is drying out forests and making them more susceptible to burn. A recent study found Earth’s boreal forests are now burning at a rate unseen in at least 10,000 years.

Wildfires also release carbon dioxide into the atmosphere, contributing to global warming. For instance, the 2014 megafires in Canada scorched more than 7 million acres of forest, releasing more than 103 million tonnes of carbon into the atmosphere – half as much as all the plants and trees in Canada typically absorb in an entire year, according to a study by NASA.

The pristine Arctic environment is particularly sensitive/fragile and warming faster than most other regions. Particles of smoke can land on snow and ice, causing the ice to absorb sunlight that it would otherwise reflect, and thereby accelerating the warming in the Arctic. Fires in the Arctic also increase the risk of further permafrost thawing that releases methane, which is also a greenhouse gas.

In view of the risks, WMO has initiated a Vegetation Fire and Smoke Pollution Warning and Advisory System to develop, implement and harmonize fire forecasting across the globe, providing a better picture of fires and related impacts and hazards everywhere.  The Southeast Asia Regional Centre, operated by the meteorological service of Singapore, is already producing forecasts.