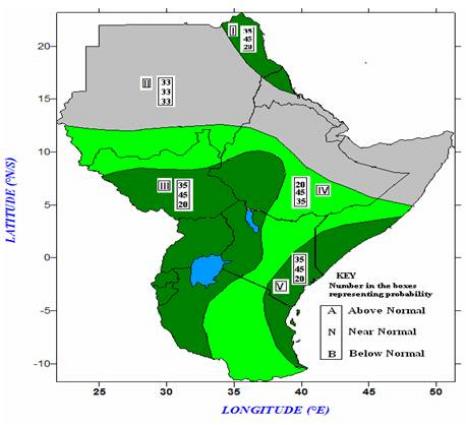 The Greater Horn of Africa Climate Outlook Forum has issued an update for the September-December 2012 rainy season to take into account the fact that the expected El Niño failed to evolve, as noted by the latest WMO El Niño/La Niña Update.

Although El Niño has a major impact, it is not the only factor that drives regional climate patterns over the Greater Horn of Africa. Others include Indian Ocean systems such as the Indian Ocean Dipole, tropical cyclones and monsoons. These were all considered in the new climate update, according to Prof. Laban Ogallo, Director, of the Intergovernmental Authority on Development’s Climate Prediction and applications Centre (ICPAC), whose activities are supported by WMO along with other partners. ICPAC is implementing a demonstration phase to seek formal designation as a WMO Regional Climate Centre (RCC).

September to December constitutes the second most important rainfall season, after the March-May rainfall season, over southern Somalia and other equatorial parts of the Greater Horn of Africa.