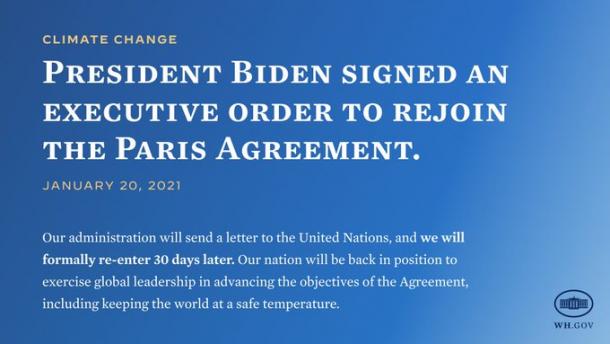 The World Meteorological Organization has joined the international community in welcoming the announcement by President Joe Biden that the United States of America will re-enter the Paris Agreement on Climate Change.

Following last year’s Climate Ambition Summit, countries producing half of global carbon pollution had committed to carbon neutrality.  Today’s commitment by President Biden brings that figure to two-thirds.  But there is a very long way to go.  The climate crisis continues to worsen and time is running out to limit temperature rise to 1.5 degrees Celsius and build more climate-resilient societies that help to protect the most vulnerable.

We look forward to the leadership of the United States in accelerating global efforts towards net zero, including by bringing forward a new nationally determined contribution (NDC) with ambitious 2030 targets and climate finance in advance of COP26 in Glasgow later this year.

I am committed to working closely with President Biden and other leaders to overcome the climate emergency, and recover better from COVID19,” said the UN Secretary-General.

UN Climate Change Executive Secretary Patricia Espinosa thanked US President Joe Biden for bringing the United States back into the Paris Agreement and said: “I am looking forward to seeing ambitious targets in the US NDC to accelerate climate action."

NDCs are national climate action plans under the Paris Agreement which describe how each country plans to contribute to reaching the agreement's goals.

WMO Secretary-General Prof. Petteri Taalas said: “We welcome the renewed commitment by the US administration. Climate change indicators and impacts make it clear that we have no time to lose. The warmest 6 years on record have all been since the Paris Agreement was signed in 2015. The past decade was the warmest on record and this long-term trend looks set to continue because of record levels of greenhouse gases in the atmosphere.