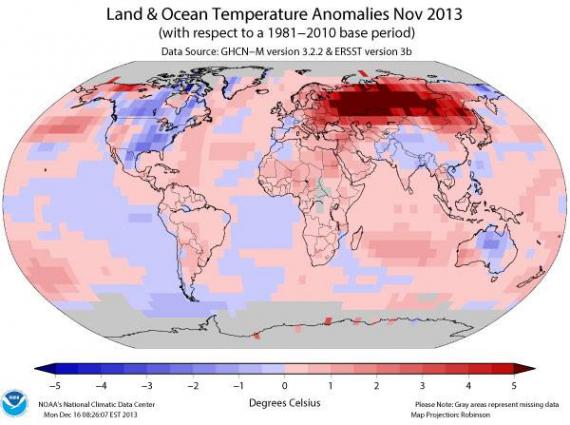 The globally-averaged temperature over land and ocean surfaces for November 2013 was the highest for November since record keeping began in 1880, according to the U.S. National Oceanic and Atmospheric Administration (NOAA) National Cli matic Data Center. noaa

Russia had its warmest November on record, according to Roshydromet. The average anomaly in a month was almost 5ºC in certain regions of the Urals, the South of Siberia, in Khabarovsk territory. On the Arctic islands in the Kara Sea, the average monthly temperature was 8-9ºC above the long-term average.

Most areas of the world experienced warmer-than-average monthly temperatures, according to NOAA. These included much of Eurasia, coastal Africa, Central America, central South America, parts of the North Atlantic Ocean, the south west Pacific Ocean, and the Indian Ocean.

Meanwhile, northern Australia, parts of North America, south west Greenland, and parts of the Southern Ocean near South America were cooler than average. No regions of the globe were record cold.

WMO will issue its Annual Statement on the Status of the Climate in 2013 early in 2014. WMO relies principally on three complementary datasets maintained by NOAA, the Hadley Centre of the UK Met Office and the Climatic Research Unit, University of East Anglia, United Kingdom (combined) and the Goddard Institute of Space Studies (GISS) operated by the National Aeronautics and Space Administration (NASA). In its provisional statement issued 13 November, WMO said 2013 was on course to be among the top ten warmest on record.