Weather report for 2050 in Brazil highlights impact of climate change 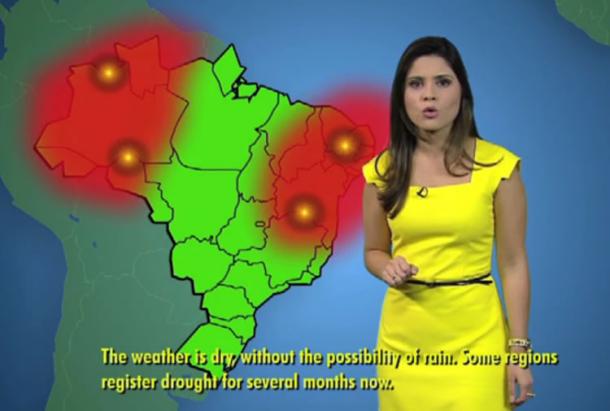 Weather report for 2050 in Brazil highlights impact of climate change

The World Meteorological Organization has released the first in a series of imaginary – but realistic - 2050 weather reports from well-known television presenters designed to sensitize people about the local impacts of climate change.

The first report from Brazil is set in June 2050. Rainfall in southern Brazil and the west Amazon is expected to exceed monthly levels in just a few days, increasing the risk of flooding and landslides whilst drought continues in northern Brazil and the east Amazon. It is another hot day.

WMO is launching the videos during the month of September to support UN Secretary-General Ban Ki-moon’s call for government, finance, business, and civil society leaders to agree to ambitious action on climate change at the UN Climate Summit on 23 September to prevent the worst-case scenarios.

“Climate change is affecting the weather everywhere. It makes it more extreme and disturbs established patterns. That means more disasters; more uncertainty,” says Mr Ban Ki -moon in a message on the video. “We can reduce the risks by cutting global greenhouse gas emissions and building low-carbon economies. Let’s work together to make our societies safer and more resilient. Please join me in taking action on climate change,” says the U.N. Secretary-General.

WMO selected 2050 as half-way point to the end of the 21st century, by which time average global temperatures could rise more than 4°C (7.2°F) if greenhouse gas emissions from human activities continue to increase at the current rate.

The weather reports are potential scenarios compatible with the most up-to-date climate science documented by the recent Intergovernmental Panel on Climate Change Fifth Assessment Report.

“It continues to rain in southern Brazil and west Amazon on this June 8th 2050.  Heavy clouds should result in rain showers with strong winds this afternoon.  The reason is the transport of hot and humid air towards these areas.  In a few days, the rain will exceed the amount expected for the entire month, which increases the risk of flooding and landslides,” says Brazilian presenter Claudia Celli.

“In northern Brazil and east Amazon, the scene is completely different.  The weather is dry, with no possibility of rain. Some regions have registered drought for several months.  And today is another hot day in Brazil,” she says. “Temperatures are above 30°C in a good part of the country, although we are already near winter.”

“This is the kind of weather forecast you may hear in 2050 as our greenhouse gas emissions continue to change Brazil’s climate.”

“Climate change experts believe that extreme events, such as intense rain showers,  may become more common over the next decades. But now, in 2014, we are already witnessing events like this. In late autumn, heavy storms reached southern Brazil. In Paraná state, 150 cities were in a state of emergency, three of them were declared public calamities. In three days, the amount of precipitation was three times above the historical average. 11 people died, houses and bridges were swept away by the water, and many people lost all they had.  The cost was millions of dollars,” says Ms Celli.

“In tropical regions, basically the entire area of Brazil, the temperature increase could exceed 4°C by the end of the century.  In terms of rain, the pattern changes a bit. Projections show a reduction of rain in east Amazon and northeast Brazil and an increase in west Amazon and southern Brazil,” says Marengo.

He calls for immediate action to reduce global warming and impacts on the population.

The video is in Portuguese with English, French and Spanish subtitles.

The videos are being issued according to the schedule below and are being hosted at https://www.youtube.com/wmovideomaster and other websites.