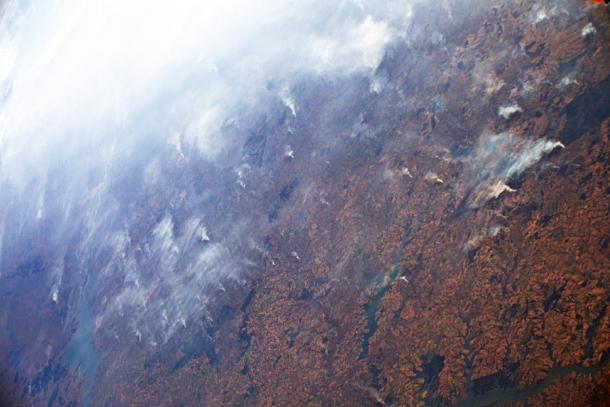 Fires that are raging in the Amazon rainforest are compounding the stress on the global climate and environment already unleashed by exceptional fires in the Arctic. There are also widespread fires in parts of tropical Africa.

Using Copernicus Sentinel-3 data, as part of the Sentinel-3 World Fires Atlas, almost 4 000 fires were detected from 1 August to 24 August 2019, according to European Space Agency.

Scientists using NASA satellites to track fire activity also have confirmed an active – though not unprecedented – wildfire year in the Brazilian Amazon in 2019, according to a NASA Earth Observatory news article.

Fire activity in the Amazon varies considerably from year-to-year and month-to-month, and peaks during Brazil’s dry season from July to October. August 2019 has witnessed a noticeable increase in large, intense, and persistent fires burning along major roads in the central Brazilian Amazon, according to scientists at the Biospheric Sciences Laboratory at NASA’s Goddard Space Flight Center.

While drought has played a large role in exacerbating fires in the past, the timing and location of fire detections early in the 2019 dry season are more consistent with land clearing than with regional drought, according to NASA and ESA.

The Amazon basin is the world’s largest tropical rainforest, spanning four countries and is home to millions of plants and animals. It is often called ‘the lungs of the world’ – and is crucial for helping to regulate global warming as the forests absorb millions of tonnes of carbon emissions every year.

The recent Intergovernmental Panel on Climate Change's Special Report on Climate Change and Land stressed the importance of ensuring the decrease in deforestation and to ensure the sustainable land management. Fires emit carbon dioxide, whilst forest loss  leads to the reduced uptake of CO2 from the atmosphere, further fostering climate change..

“I’m deeply concerned by the fires in the Amazon rainforest. In the midst of the global climate crisis, we cannot afford more damage to a major source of oxygen and biodiversity,” said UN Secretary-General Antonio Guterres.

Josef Aschbacher, ESA’s Director of Earth Observation Programmes, said, “As we continue to face the ongoing climate crisis, satellites are essential in monitoring wildfires in remote areas, especially for a key component of the Earth system such as the Amazon.”

In addition to the direct threat from burning, including to many indigenous communities, wildfires also release harmful pollutants including particulate matter and toxic gases such as carbon monoxide, nitrogen oxides, and non-methane organic compounds into the atmosphere.

The European Union’s Copernicus Atmosphere Monitoring System (CAMS) reports that the fires released 255 megatonnes of carbon dioxide into the atmosphere from 1 to 25 August, as well as copious amounts of carbon monoxide.

Particles and gases from burning biomass can be carried over long distances, affecting air quality in regions far away. Plumes of smoke have spread across the Amazon region. Strong winds blew smoke to São Paulo – more than 2500 km away— and combined with a cold front and heavy storm clouds to plunge the city into darkness on 19 August. According to CAMS, smoke travelled as far as the Atlantic coast. 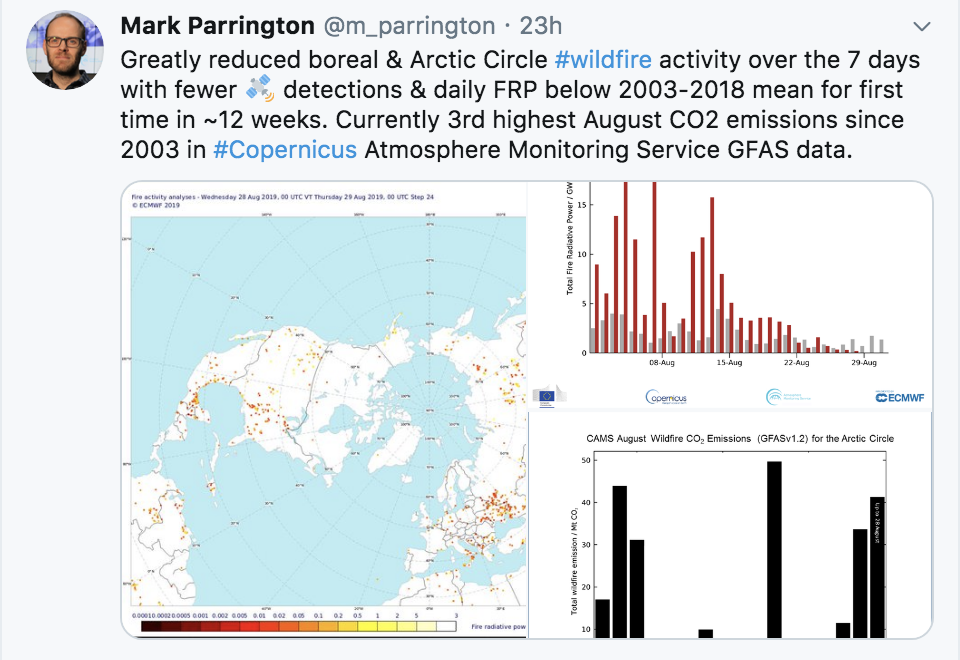 The Amazon fire activity follows unprecedented fires in Siberia and parts of the Arctic, Greenland and Alaska in June and July.  Parts of Europe are also suffering from wildfires.

Unusually high levels of wildfire activity within the Arctic Circle monitored between the second week of June 2019 continued well into August, according to data from the Copernicus Atmosphere Monitoring Service. Many of the fires have burnt in Siberia, Alaska and northern Canada, but there has also been some wildfire activity in Greenland. Environmental impacts include air pollution resulting from exceptionally high levels of emissions, and potential climate feedbacks.

“With a couple of exceptions, every day since 9 June the total radiative power from wildfires within the Arctic Circle has been above average compared to the last 15 years,” says ECMWF scientist Mark Parrington in a statement issued 21 August. “This makes the summer of 2019 an exceptional wildfire season for the area.”

WMO’s Global Atmosphere Watch Programme earlier this year released a short animation which highlights the risks and explains how advances in satellite technology make it possible to detect and monitor fire dangers. Improving forecasting systems is important for predictions and warnings around fire danger and related air pollution hazards.

Satellites are often the first to detect fires burning in remote regions. NASA’s primary tool for fire detections since 2002 has been the Moderate Resolution Imaging Spectroradiometer (MODIS) instruments on  the Terra and Aqua satellites.

CAMS, which is implemented by the European Centre for Medium-Range Weather Forecasts (ECMWF) on behalf of the EU, incorporates observations of wildfires from the MODIS instruments on NASA’s Terra and Aqua satellites into its Global Fire Assimilation System (GFAS) to monitor the fires and estimate the emission of pollutants from them. 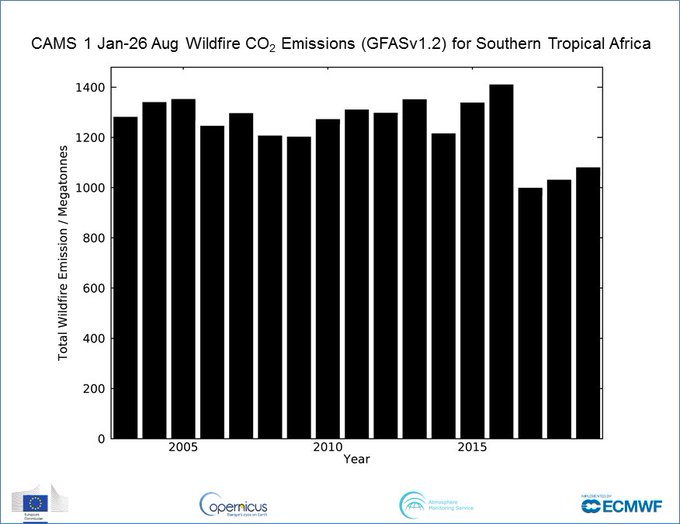 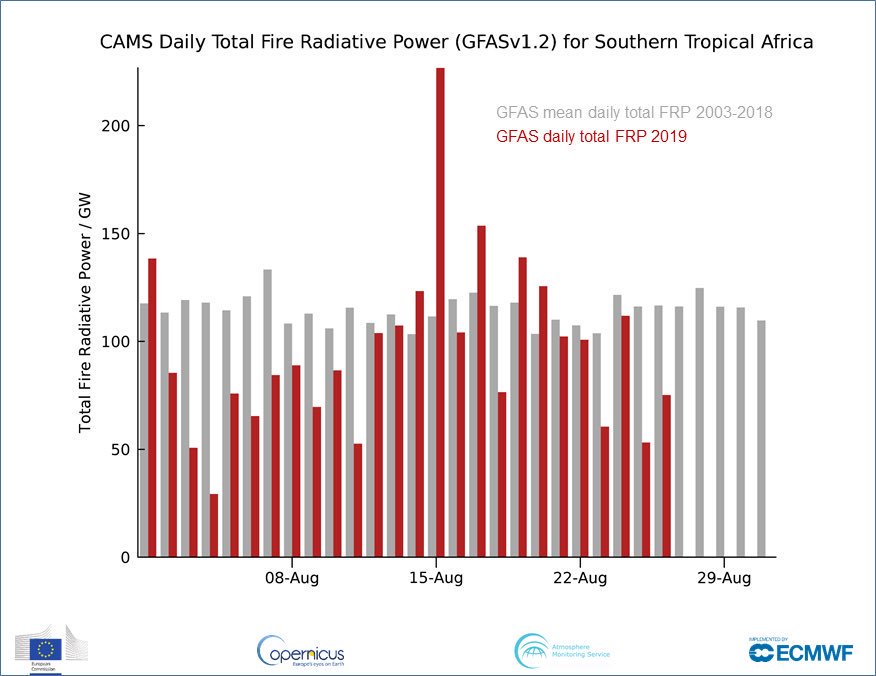 It assimilates fire radiative power observations from satellite-based sensors to produce daily estimates of biomass burning emissions which are part of the extensive measurements performed by many stations of the Global Atmosphere Watch (GAW) Programme. These measurements are essential for forecasts, research on atmospheric composition and to develop warning systems. Measurements from GAW stations are also used for verification of the model employed by the CAMS for global forecasts and analyses of emissions from wildfires and biomass burning.

At this point in the fire season, MODIS active fire detections in 2019 are higher across the Brazilian Amazon than in any year since 2010. The state of Amazonas is on track for record fire activity in 2019.

MODIS fire detections are analyzed by the Global Fire Emissions Database (GFED) project, which includes NASA Goddard, the University of California, Irvine, and Vrije Universiteit Amsterdam. Over the years, the GFED team has processed 17 years of NASA satellite data to better understand the role of fire for changes in the Earth system. Their analysis of the southern Amazon includes parts of Brazil, Peru, and Bolivia that typically see fires between July and October. Their data plots are available online here.