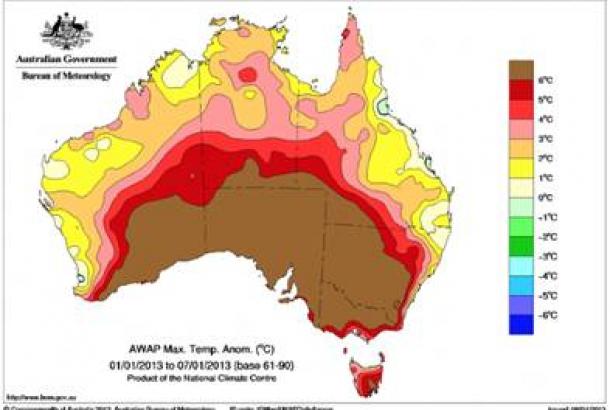 Large parts of central and southern Australia are currently under the influence of a persistent and widespread heat wave event, leading to a number of new temperature maximums. The Bureau of Meteorology expects further significant records to be set. The heat wave, which is pushing the limits of previous temperature extremes, has required an adjustment of the scale used to represent forecast temperatures with new colours representing 50-52°C and 52-54°C.

For September to December, the average Australian maximum temperature was the highest on record with a national anomaly of +1.61 °C, slightly ahead of the previous record of 1.60 °C set in 2002. The start of the current heat wave event traces back to late December 2012, and all states and territories have seen unusually hot temperatures with many site records approached or exceeded across southern and central Australia.
Statement with list