Many parts of Europe have been impacted by a severe and unusually early heatwave since 27 June.  There have been record-breaking temperatures in the United States of America, with wildfires in both Canada and the USA. Southern China has been gripped by high heat accompanied by torrential downpours and widespread flooding.

These are the highlights of a roundup by the World Meteorological Organization of some of the extreme weather events currently taking place in the Northern Hemisphere.

The Deutscher Wetterdienst (DWD), which acts as WMO’s Regional Climate Centre for Europe’s Node on Climate Monitoring, has conducted an initial analysis of the European heatwave. According to its models, many parts of Europe will continue to see above normal temperatures and dry conditions.

The European heatwave is unusual because it is so early and so widespread. Comparisons are already being drawn to the 2003 and 2010 heatwaves, which each killed tens of thousands of people.

The difference is that the 2015 is much earlier and Europe is much better prepared with heat-health action plans. WMO and the World Health Organization on 1 July issued join Guidance on heat-health early warning systems, drawing to a considerable extent on the expertise and experience gained in Europe since the 2003 heatwave.

“The heatwave is still ongoing and it is premature to say whether it can be attributed to climate change or whether it is due to naturally occurring climate variability,” said Omar Baddour, who coordinates WMO’s World Climate Data and Monitoring Programme.  But climate change scenarios predict that heatwaves will become more intense, more frequent and longer. It is notable that the time between major heatwaves (2003, 2010, 2015) is getting shorter,” he said.

According to www.meteoalarm.eu, many countries have issued heat advisories and alerts for Friday and Saturday, including the maximum red alert for Switzerland and western Poland and amber alerts for much of France.

The heatwave originated as a result of very hot air moving up from the Sahara to  the Iberian Peninsula, where at the end of June temperatures up to 43°C were measured. This means new heat records in some places for the month of June.  Almeria airport (Spain) recorded 40.8°C on June 30 which was 0.2°C above the previous record for June in 2001 of 40.6°C. 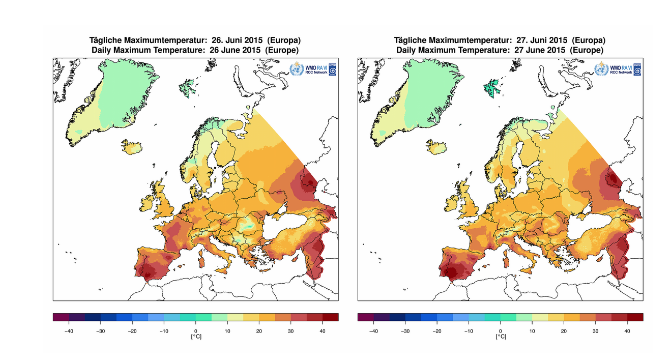 During the past few days in several parts of Europe extreme maximum temperatures were observed: more than 40°C in France, up to 36°C in Italy, 35-40°C in Southeast and south Russia, west Kazakhstan, Armenia, Azerbaijan. Even in England values of more than 36° C were reached (new heat record for London-Heathrow), according to the DWD analysis.

On 2 July the highest temperatures in Germany witnessed 38°C in Trier, 37.2°C in Düsseldorf, and 37.1°C in Münster/ Osnabrück.

Spain, which had a brief respite, witnessed the onset of a new heatwave on Friday, according to the national meteorological service AEMET. 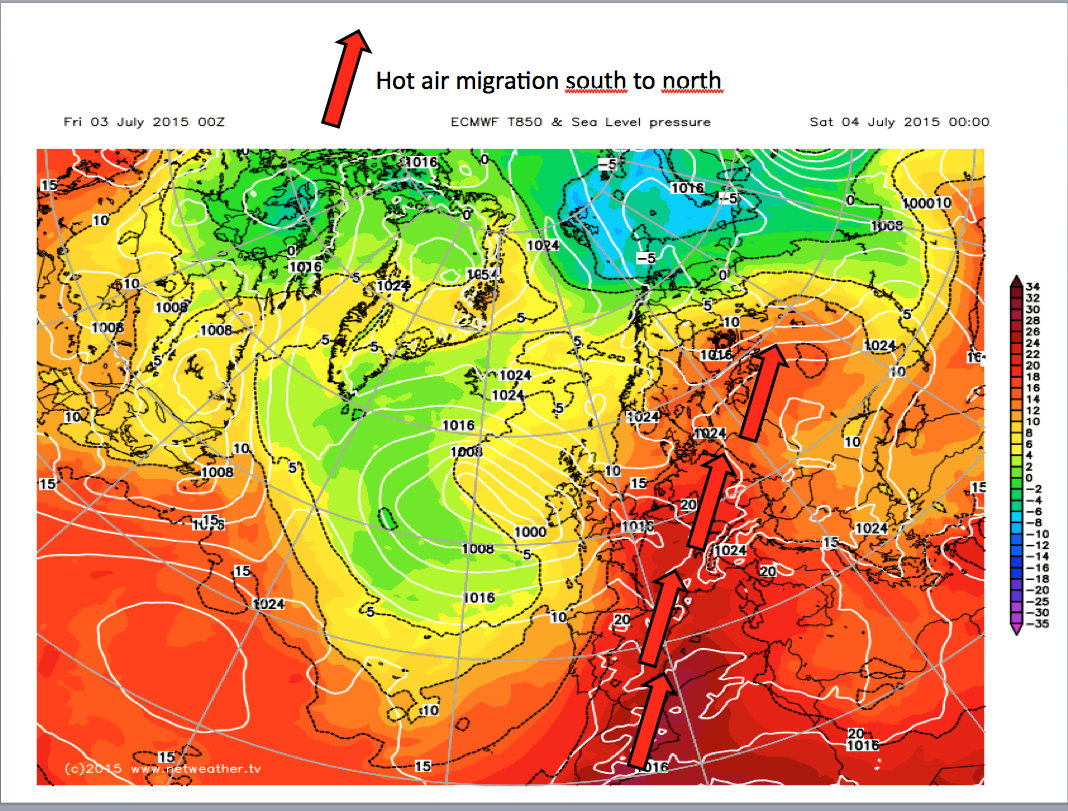 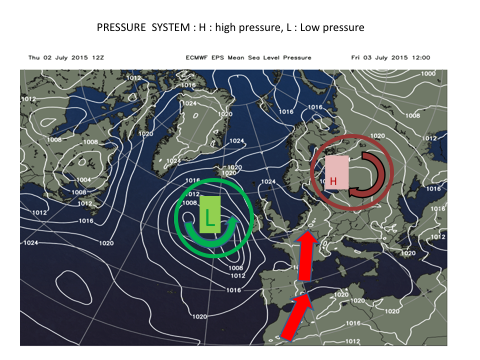 Many parts of the Western United States are also suffering from high temperatures , further drying out soils and increasing the risk of wildfires. This ranges from California to the states of Washington and Oregan in the northwest. Parts of Washington State have seen temperatures exceeding 40°C in the past week.

According to the U.S. National Centers for Environmental Information, 623 climatic stations broke daily maximum high records in the last 7 days, and 17 broke all time records for maximum temperatures.

The U.S. Drought Monitor released 2 July said record heat and dryness over Western United States in the past wee, as well as over the past month, has quickly deteriorated conditions in many areas after a wet May. 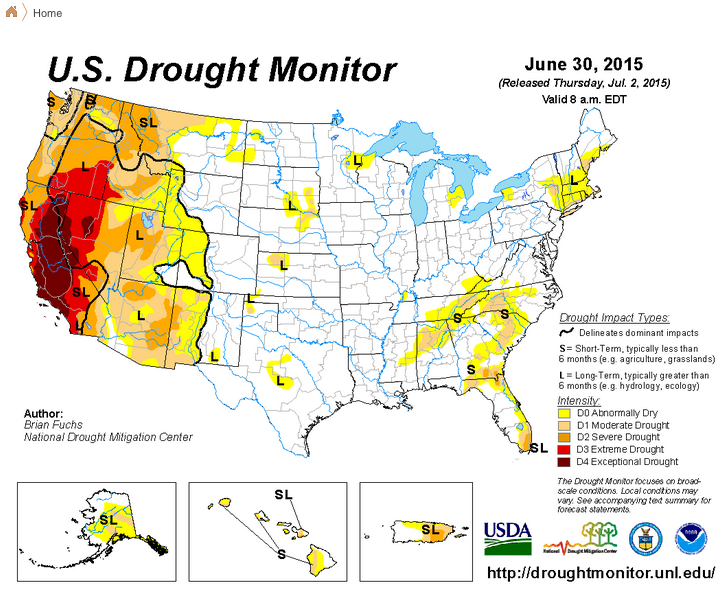 The wildfire season in North America has got off to a very early start because of a number of factors including dry conditions, heat, and lightning.

As of 29 June, the Canadian Wildland Fire Information System said there were 168 uncontrolled forest in Canada. The National Fire Preparedness Level increased to 4 (out of 5). The Northwest Territories, Saskatchewan and Manitoba are at preparedness level 5.

“The wildfire situation this summer has mainly been triggered by repeated lightning storms tracking across an abnormally dry state.  (The lightning has been astonishing; on June 21-23, some 50,000 lightning strikes were recorded in Alaska.)”

The heatwave which caused more than 1,000 deaths in Karachi last week was aggravated by a low pressure system off the coast of Pakistan which meant that the usual cooling  coastal breeze was replaced by hot air coming from interior. According to the Pakistan Meteorological Department, temperatures remain high, but the situation has stabilized. Parts of Pakistan have seen the onset of the monsoon.

Southwest China has witnessed a heatwave with temperatures over 35 degrees for a widespread area, accompanied by exceptionally heavy rainfall and widespread flood, prompting the China Meteorological Administration to issue level 4 emergency alert. 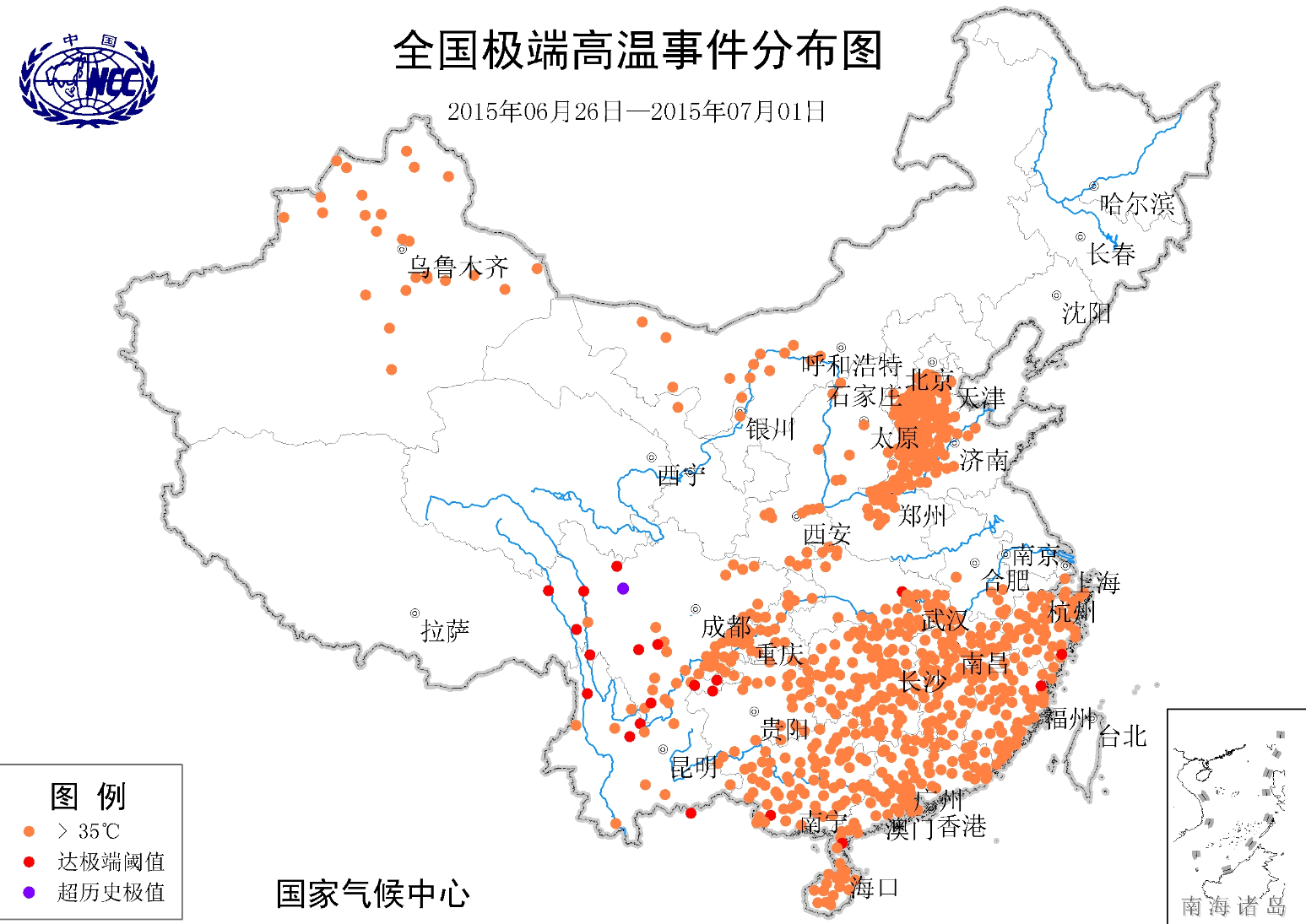