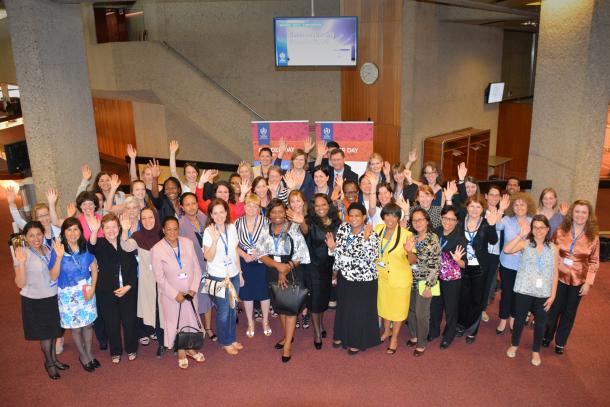 The World Meteorological Congress held a dedicated gender day on 5 June to encourage the development of gender-differentiated weather and climate services for women for the benefit of the entire community and to promote more senior-level female scientists.

“We have to walk the talk,” said WMO Assistant Secretary-General Elena Manaenkova, who is spearheading the WMO gender programme.

A high-level UN-wide side event on the benefits of gender equality in Weather and Climate Services followed up on WMO’s successful international conference held in November last year.  A Women’s Leadership Workshop sponsored by the UN Institute for Training and Research (UNITAR) took place on 6 June to strengthen the skills of female delegates and diplomats attending Congress.

“We have to be examples for young women coming up in the sciences and be examples for our own children,” said Laura Furgione, US Permanent Representative with WMO and Deputy Director of the National Weather Service. “We have to beat the drum and increase the awareness on gender issues.”

Men and women are impacted differently by the weather and so have different needs from weather and climate services.

Overall, women bear the brunt of the adverse affects of extreme weather and climate change. Women and girls account for 70% of world’s poor, and their lack of access to resources and technology ranging from rain gauges to cellular phones limit their ability to take proactive action. Pregnant and elderly women have limited mobility during disasters.

However, studies have shown that women are more risk-averse. In the USA, men account for 80% of lightning and 90% of riptide casualties because they are less likely to heed warnings.

Women also have the greatest capacity to become champions of community resilience because of their extensive networks and their resourcefulness.

WMO is also working to attract more women into meteorology, hydrology and climate science, and to increase the representation of women on its governing bodies, technical committees and in the secretariat.

Women account for only 30 percent of meteorologists and hydrologists globally.

There has been overall progress in female participation, but from a very low baseline. In the 1990s, only 9% of Congress delegates were women. This rose to 25% by 2015.

“Progress is encouraging but it is still too slow,” said Ms Manaenkova. “Female participation in WMO constituent bodies does not exceed 20% on average. At this rate, we will only reach parity in 2050,” she said.

To help speed the pace of change, Congress hosted the launch of a new U.N. multi-agency Women’s Leadership Programme. It is sponsored by the UN Institute for Training and Research, with the support of UN Women, the UN Development Programme, U.N. Office for Disaster Risk Reduction (UNISDR), WMO and the U.N. Framework Convention on Climate Change Secretariat. The inaugural Women’s Leadership workshop was held 6 June to train delegates in negotiating and diplomatic skills and to increase their self-confidence and presentation powers.