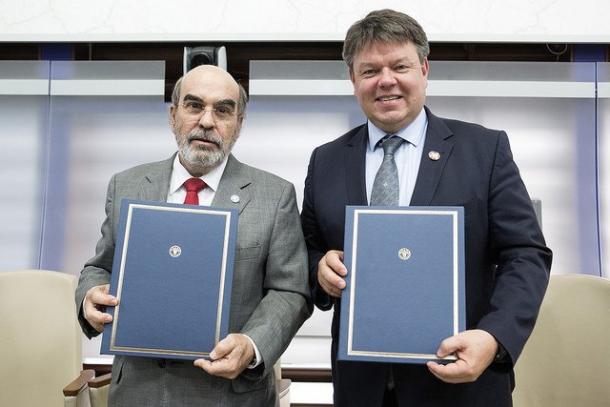 The UN Food and Agriculture Organization (FAO) and the World Meteorological Organization have signed a memorandum of understanding to deepen cooperation to respond to climate variability and climate change, which, according to the agreement, "represents an urgent and potentially irreversible threat to human societies, natural ecosystems and food security."

Through their strengthened partnership, the two organizations will work on strengthening agro-meteorological services and making them more accessible to farmers and fishers; improve global and region-specific monitoring for early warning and response to high-impact events like droughts.

In addition, they will collaborate on technical cooperation, joint programmes and project development.  An example of this is the Adaptation Fund Project that was approved in early 2017 on Agricultural Climate Resilience Enhancement Initiative (ACREI). This project focuses on enhancing weather and climate communications to farmers in Ethiopia, Kenya, and Uganda which also involves the Inter-Governmental Authority on Development (IGAD) in East Africa.

The agreement was signed by FAO Director-General José Graziano da Silva and WMO Secretary-General Petteri Taalas on the sidelines of an international seminar on drought organized by Iran, the Netherlands, and FAO in Rome.

"Saving livelihoods means saving lives - this is what building resilience is all about," said Mr Graziano da Silva. Recalling the 2011 drought in Somalia that saw over 250,000 people perish from hunger, he said: "People die because they are not prepared to face the impacts of the drought - because their livelihoods are not resilient enough."

"For years, the focus has been responding to droughts when they happen, rushing to provide emergency assistance and to keep people alive," Graziano da Silva said, noting that while "of course, that is important," investing in preparedness and resilience is essential. Doing so puts countries on a footing to act quickly before it is too late, means that farmers and rural communities are better positioned to cope with extreme weather when it does hit.

John Mutorwa, Minister for Agriculture, Water and Forestry of Namibia, said that in these times of climate change, drought has emerged as a challenge that all countries will be forced to face, again and again.

International Fund for Agriculture Development (IFAD) President Gilbert F. Houngbo in his remarks emphasized the need break the cycle of crisis, disaster and relief and called on the international community to be proactive and to think not just of today's emergencies, but also of how to prevent tomorrow's.

"This means investing in smallholder farmers to help them address productivity challenges, give them access to markets and finance and most importantly encourage climate-smart agriculture so that when the drought inevitably comes, they have the tools they need to survive and thrive," said Houngbo.

The seminar aims to catalyse a renewed international push to tackle the many impacts of drought, which drive not only hunger and instability but cause economic losses up to $8 billion each annually.

The need for a global drought re-boot is pressing. As the planet's climate changes, severe dry-spells are becoming more and more frequent. Since the 1970s, the land area in the world affected by situations of drought has doubled.

The burden is especially high in developing countries, where agriculture remains an economic mainstay. Over 80 percent of damage and losses caused by drought are born by agriculture in the developing world, FAO studies have shown.

And Africa in particular has borne the brunt. Between 2005 and 2016, 84 droughts affected 34 different African nations.
There is no shortage of knowledge, technologies, and good practices for addressing drought, water shortages, and their implications for food security, agriculture, and rural development.

During the seminar, experts from the academic, science, humanitarian, and policymaking communities will take part in a number of break-out sessions focusing on what needs to change in terms of drought management and how to make that change happen; ways to connect farmers to improved technologies to better cope; options for shifting from reactive to proactive responses, and how to slot drought management into the 2030 development agenda.

WMO and FAO are closely working on drought issues. They have co-sponsored the High-level Meeting on National Drought Policies (HMNDP) in 2013 along with the United Nations Convention to Combat Desertification (UNCCD). In addition, both organisations are involved in each other’s programmes such as FAO’s Global Framework on Water Scarcity in Agriculture and the Integrated Drought  Management Programme (IDMP) of WMO and the Global Water Partnership.

A final seminar communiqué will report on outcomes and make recommendations for moving forward.