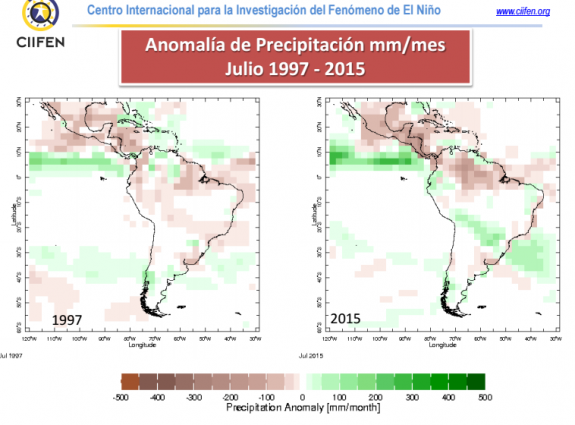 Preparedness efforts to limit the impact of this year’s El Niño are gaining momentum in  South America, with a special focus on sectors which are most vulnerable to extreme climate conditions.

A mature and strong El Niño is now present in the tropical Pacific Ocean and is likely to intensify further. It is the strongest since 1997-1998 and is potentially among the four strongest events since 1950, according to the latest WMO Update.

Since the release of the WMO Update, meteorological services around the world have been busy informing decision makers of the national and local impacts, which include extreme rainfall and flooding, drought and heatwaves.

Specifically, the International Center for the Investigation of the El Niño Phenomenon, CIIFEN, has organized briefings for policy makers and representatives from disaster risk management, agriculture and food production, health, tourism and other industries in South America.

The briefings form part of a much wider mobilization, coordination and information campaign designed to maximize public safety and keep economic and material losses to a minimum. The disastrous 1997-98 El Niño caused drought and flooding in different parts of South America. In the Andean region alone, the estimated cost in terms of lost production, damage to infrastructure and services was more than US$7.5 billion.

CIIFEN, based in Guayaquil, Ecuador, is WMO’s Regional Climate Centre for Western South America. CIIFEN and the Pan-American Health Organization held a joint briefing on 15 September for the representatives of the health sector from many countries in the region. It was supported by the joint WHO/WMO office for climate and health, established in Geneva in 2014 to improve health outcomes through better use of weather and climate information.

“This is a perfect example of a clear climate service to the health sector, “ said Rodney Martinez, international director of CIIFEN.  “I am confident we are contributing all together to make a difference in this El Niño, but we need to keep moving.”

El Niño events can have a major impact on the health sector. Changes in temperature, humidity and rainfall influence  vector-borne diseases such as malaria and dengue fever and water-borne diseases like diarrhea and cholera. This is in addition to  flood and drought related health and nutritional impacts, as well as direct damage to health infrastructure.

For instance, in the 1997-98 El Niño, central Ecuador and Peru suffered rainfall more than 10 times normal, which caused flooding, extensive erosion and mudslides with loss of lives, destruction of homes and infrastructure, damage to food supplies . In Peru about 10% of the health facilities were damaged.

Following on from the joint meeting with PAHO, CIIFEN organized a separate national meeting with health authorities and medical practitioners from throughout Ecuador.

Similar meetings have been held with decision-makers from all levels of government and the private sector.