WMO and UNESCO renew cooperation in hydrology and water resources 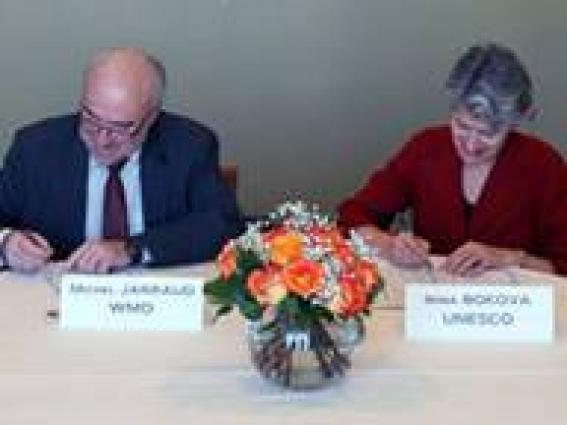 WMO and UNESCO renew cooperation in hydrology and water resources

The World Meteorological Organization (WMO) and the United Nations Educational, Scientific and Cultural Organization (UNESCO) have signed an agreement  reaffirming their long term cooperation in the field of hydrology and water resources.

The agreement was signed 25 November at UN Headquarters in New York by UNESCO Director-General, Irina Bokova, and WMO Secretary-General Michel Jarraud on the sidelines of the U.N. Chief Executives Board meeting at the culmination of the International Year of Water Cooperation.

While maintaining respective programmes in line with their fields of competence, the agreement recognizes the necessity of close cooperation on freshwater, water science and water resources.

UNESCO and WMO have had one of the longest partnerships in the UN system, with the first agreement signed in 1954. Both agencies have the oldest programmes in the field of hydrology in the UN, and this new agreement shows the long-standing joint interest in collaboration on technical and scientific matters.

Water, along with weather and climate, is one of WMO’s areas of focus. Its Hydrology and Water Resources Programme (HWRP) is concerned with the assessment of the quantity and quality of water resources , the mitigation of water-related hazards like floods and droughts,  and to facilitate horizontal cooperation and transfer of technologies to strengthen the capacities of the hydrological services of the world.

UNESCO is a partner of the WMO-led Global Framework for Climate Services and, through its International Hydrological Programme and Intergovernmental Oceanographic Commission, a key contributor in the areas of observation and water resource management as well as a potential user of climate products and information services.