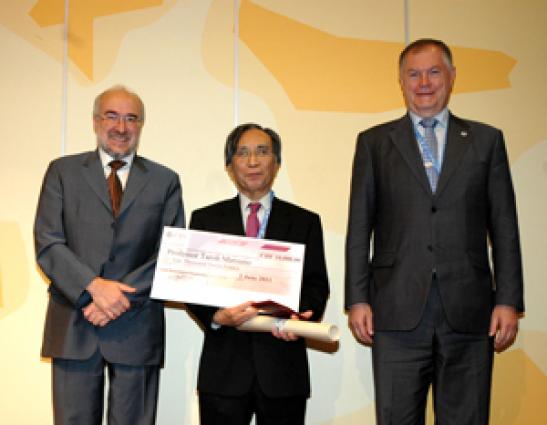 The World Meteorological Organization presented its most prestigious award to Prof. Taroh Matsuno of Japan in a ceremony on 2 June 2011 during the WMO 16th Congress (16 May to 3 June 2011).

The IMO prize, granted annually, recognizes outstanding scientific research work in the field of meteorology. Prof. Matsuno is an eminent research scientist in atmospheric dynamics and a distinguished leader in climate research who has significantly contributed to the progress of studies on climate change.

The presentation of the 55th IMO Prize was made by WMO President Alexander Bedritskiy and WMO Secretary-General Michel Jarraud. The award consists of a gold medal, parchment scroll bearing the award citation and a monetary award of CHF 10 000.

"Prof. Matsuno's work represents a major contribution. We expect to derive benefits from his work for the Global Framework on Climate Services, which we are discussing now during this WMO 16th Congress, said WMO Secretary-General Jarraud.

I would like to express my sense of pride on behalf of the people of Japan, as it is the first time a Japanese has been awarded this splendid prize, said Ambassador Kenichi Suganuma, Permanent Mission of Japan to the United Nations and Other International Organizations in Geneva. Japan attaches special importance to this prize because meteorological science serves as a basis for saving lives and property.

Prof. Matsuno delivered his lecture on The Future of Numerical Modelling of Weather and Climate in the Tropics. Many participants, particularly from developing countries, commented on how his research had influenced their work. His contributions were also recognized by the Intergovernmental Panel on Climate Change and the World Climate Research Programme.

About the IMO prize