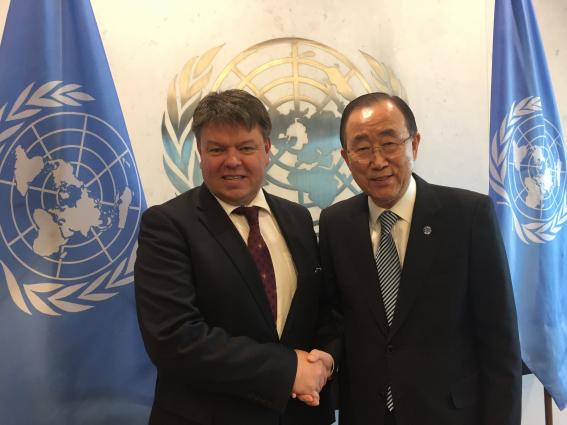 WMO Secretary-General Petteri Taalas briefed United Nations Secretary-General Ban Ki-moon on the state of the climate and record greenhouse gas concentrations at a meeting in New York ahead of the annual UN Chief Executives Board for Coordination Meeting on 9 November.

Mr Taalas presented the findings of WMO’s statement on the global climate in 2011-2015, the hottest five-year period on record. The report, based on input from WMO Members and partners, was submitted to the United Nations climate change conference, COP22, to give a longer-term picture of the climate and to address multi-year events like droughts.

The report showed that, of 79 studies published by the Bulletin of the American Meteorological Society between 2011 and 2014, more than half found that human-induced climate change contributed to the extreme event in question. Some studies found that the probability of extreme heat increased by 10 times or more.

Mr Taalas will present WMO’s provisional statement on the state of the climate in 2016 at COP22 on 14 November.