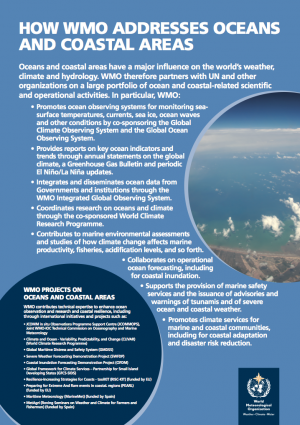 Every year on June 8th, the international community celebrates World Oceans Day. This year’s theme of « Healthy Oceans, Healthy Planet » highlights both the need to protect and sustainably manage the oceans and the central role they play in climate, hydrology, biodiversity and other Earth systems. WMO Secretary-General Michel Jarraud’s video statement for World Oceans Day is available here.

The WMO Congress observed the Day through a side event on « Healthy Oceans, Healthy Planet : Opportunities for Observations, Research and Services ». WMO Deputy Secretary General Jerry Lengoasa opened the event by noting WMO’s contribution to this field and the decisions already taken by Congress reconfirming the importance of oceans to WMO’s work. WMO’s projects and activities on oceans are summarized on the flyer posted here.

Johan Stander, Co-President of the Joint WMO-IOC Commission for Oceanography and Marine Meteorology (JCOMM) described the many benefits that oceans provide. They contribute  half the oxygen that we breath, absorb human-generated carbon dioxide, provide food and nutrition, contribute to socio-economic development, facilitate international trade, and much more. The oceans are also under threat, as they absorb more than 90% of the excess energy trapped by greenhouse gases and are becoming more acidic as they absorb carbon dioxide. WMO and its parters coordinate and provide ocean observations, forecasts and capacity development

Aida Diongue Niang, Director of the Senegal Meteorological Service (and one of eight women who are directors of Meteorological Services in Africa, and of 20 worldwide) spoke about how Senegal provides weather and climate services for fishing communities. With its densely populated coastline of 700 km, Senegal relies on seafood for 70% of its protein, and fisheries are the country’s number one export earner. To help fishers stay safe, the Meteorological Service has developed forecasts, SMS warnings and color-coded alerts, and regular bulletins. The WMO/GFCS video on Senegal’s climate services for fishing communities can be viewed here.

Martin Beniston of the University of Geneva described the objectives and results of the PlanetSolar DeepWater expedition, for which he was the scientific leader. The research voyage of the world’s largest solar-powered ocean-going ship marked the first time ever that a vehicle circumnavigated the globe using only solar energy. The research team crossed the Atlantic and studied fine-scale ocean-atmosphere interactions, such as aerosols that affect energy flows and clouds, as well as  the physical, chemical and biological properties of ocean eddies. More information about the expedition can be found at the exhibition website.

To learn more about the World Ocean's Day celebration at UN Headquarters in New York, visit UNESCO and United Nations Oceans & Law of the Sea.