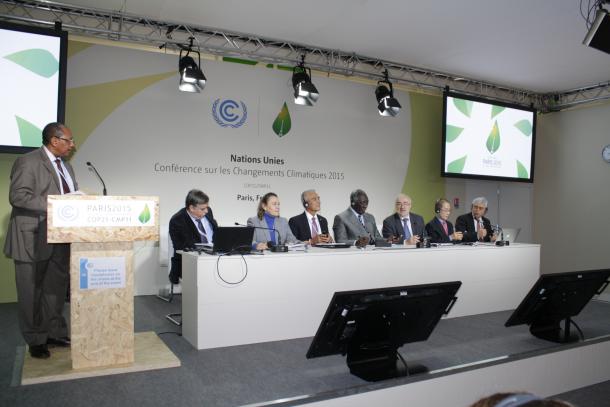 “Climate change is an issue of survival,” declared H.E. Anote Tong, President of Kiribati, the keynote speaker at the United Nations System side event co-sponsored by WMO on “Science-based climate information – building on evidence to implement policies,” on 4 December at COP21.

Kiribati is one of the low-lying Pacific islands most at threat of rising sea levels. Even now, Kiribati is suffering more high tides, damage to homes and food crops and drinking water, and extreme weather. “Based on this experience and climate change projections, we are faced with very real possibility of our islands not being able to support our current population and life as we know it today,” President Tong told the side event.

Kiribati has reconciled itself to the “brutal reality” that the scale of resources necessary for adaptation will be insufficient and so that Kiribati was preparing for the worst.

“Relocation must be part of our adaptation strategy, adaptation beyond our borders,” said President Tong. The government is also trying to educate and train people to make them more competitive and mobile on the international market, he said.

He said the Intergovernmental Panel on Climate Change had provided ample evidence that “something is terribly wrong.” “And yet the world continues to oscillate and we continue to ignore what the science is telling us and what we are witnessing with our own lives,” he said.

“It’s a challenge to the entire planet and not even the most developed country is  exempt,” said Mr Kufuor, the former President of Ghana. “We need a very comprehensive global effort. Without science we wont make a dent so scientific information is crucial,” he said.

Hoesung Lee, who was recently elected IPCC chair, said ahead of the Sixth Assessment Report, the IPCC would seek to become more geographically balanced with a greater focus on developing country scientists and regional and local impacts.  He said there would also be greater attention, after COP21, to possible solutions for dealing with climate change.

The IPCC would improve the way it communicates to translate the complexity of science into language understood by everybody. “This does not mean dumbing down the language. Scientific accuracy and rigour will always be the hallmark of the IPCC,” he said.

“We are at a historic period of life on this planet. We as a human race are modifying life on the planet within the space of a couple of generations,” said WMO Secretary-General Michel Jarraud. “Thanks to the science of the IPCC, we know what’s going on now but what will be the consequences in the future,” he said.

WMO would continue to inform negotiators at climate change negotiations of the science, he said. “Negotiators no longer have an excuse for not making decisions.”

Vladimir Ryabinin, of UNESCO’s Intergovernmental Oceanographic Commission, said the oceans played a crucial role in the climate and in socio-economic development. More than 90 percent of heat from greenhouse gases is absorbed by the oceans.

Sustained ocean observations and research are a must to inform policy making and adaptation, he said. “The ocean is not only the victim, but also part of the solution and must be part of the conversation,” he said.