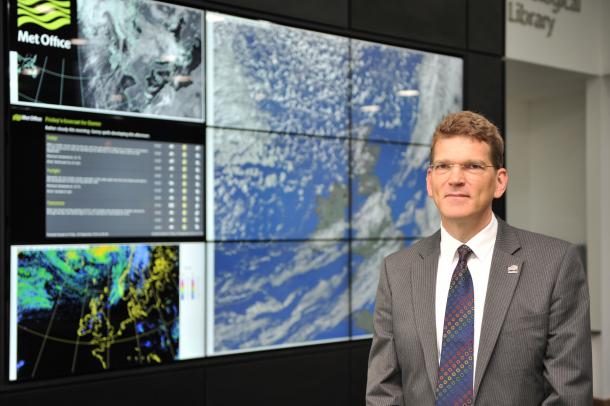 Robert Varley, Chief Executive of the Met Office in the United Kingdom, has been elected First Vice-President of the World Meteorological Organization (WMO). Mr Varley is the UK’s Permanent Representative to WMO, and a member of the WMO Executive Council.

Mr  Varley will support WMO President David Grimes, Assistant Deputy Minister and head of Environment and Climate Change Canada’s Meteorological Service. The WMO President presides over the sessions of Congress and the Executive Council, which guide WMO activities in research and services related to weather, water and climate. The positions of President and Vice-President are honorary.

“On behalf of the Organization and my own behalf, I am pleased to extend our warmest congratulations to you on your designation as the First Vice-President of WMO.  I look forward to your future participation and effective contribution to the work of the Organization for the benefit of all our Members,” said WMO Secretary-General Petteri Taalas.

Mr Varley has been Chief Executive of the Met Office since 2014. He is a member of the WMO Executive Council’s working group on Strategic and Operational Planning, as well as working groups on disaster risk reduction and gender mainstreaming.

“The WMO’s role in providing strong and clear leadership within the global meteorological and hydrological community towards protecting life and property and improving well-being of societies, aligns extremely closely with the purpose I have put at the heart of my own organisation, the Met Office,” said Mr Varley. “I have long been a vocal advocate in promoting the ongoing relevance of National Meteorological and Hydrological Services in a changing social, political and industrial world.

Mr Varley was elected to fill the post vacated by Divino Moura of Brazil in a postal/electronic ballot among WMO’s 191 Members. The positions of WMO Second and Third-Vice President will be filled in due course.