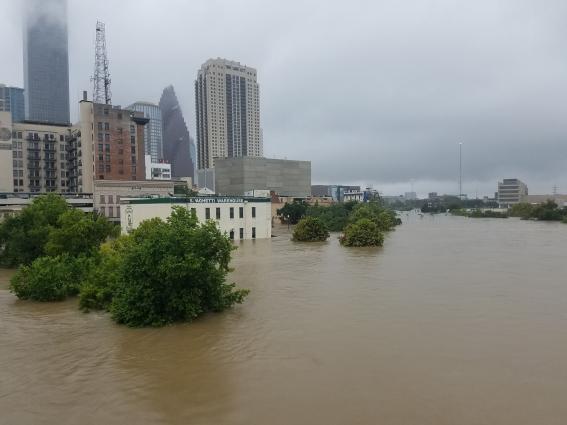 Hurricane Harvey brought record multi-day rainfall to the Houston area, after it stalled in the region following landfall.  Harvey had intensified before landfall after travelling over unusually warm waters (~2°C) in the western Gulf of Mexico.

There is no clear evidence that climate change is making the occurrence of slowly moving land-falling hurricanes in the Houston region, such as Hurricane Harvey, more or less likely. However, some aspects or "ingredients" of the Harvey event may have linkages to climate change.

For example, the rainfall rates associated with Harvey were likely made more intense by anthropogenic climate change.  This is a consequence of the tropical atmosphere
generally holding more water vapor due to climate warming (about 7% more water vapor per degree Celsius sea surface temperature increase). This higher water vapor content leads to higher rainfall rates in hurricanes that have been simulated using climate models.

A detectable anthropogenic influence on water vapor near the earth's surface has been identified with medium confidence according to the Intergovernmental Panel on Climate Change Fifth Assessment Report (IPCC AR5).  A regional detection-attribution study indicates that human activities have caused a detectable warming of Gulf of Mexico sea surface temperatures over the past century, with one study reporting a linear increasing trend of about 0.5°C over the period 1873-2005. However, a detectable (i.e. outside the range of natural variability) anthropogenic influence on hurricane rainfall rates has not yet been convincingly documented in observed data.

The inferred impact of anthropogenic warming on Harvey's rainfall rates is an indirect attribution based on the previously identified attributable human influence on water vapor together with model simulations and physical understanding of hurricane rainfall processes.

Model simulations also indicate that hurricanes in a warmer climate are likely to become more intense, and that it is more likely than not that the frequency of category 4 hurricanes like Harvey will increase over the 21st century, even if overall tropical cyclone numbers do not increase, or even decrease.  Such changes are not yet clearly detectable in observed data due in part to limitations of existing datasets.

Ongoing sea-level rise, attributable in part to anthropogenic climate change, also exacerbates storm surge for land-falling hurricanes such as Harvey. Damage resulting from the geophysical event itself will be influenced by the vulnerability of the affected region, which is increased by factors such as population and infrastructure growth, and potentially decreased by mitigation measures such as flood control systems. Extensive coastal development has generally led to large increases in hurricane damage in U.S. coastal communities over the past century.