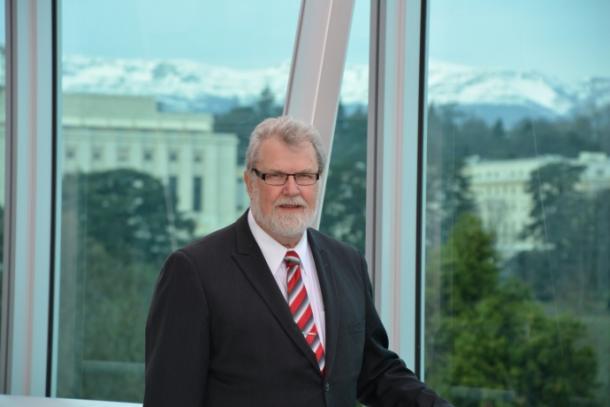 David Grimes, who was WMO President from 2011 to 2019, has been recognized with one of Canada’s top civilian honours.

Mr Grimes was named as a Member of the Order of Canada for his “outstanding leadership in meteorology and for his pioneering development of a global strategy on climate change and disaster-risk preparedness.”

The Order of Canada is one of Canada’s top civilian honours. Its iconic snowflake is a fitting tribute to Mr Grimes commitment to the cryosphere and to increasing observations and forecasts in Polar regions as well as the impact of climate change on the Arctic.

WMO has also recognized Mr Grimes with its own top honor – the IMO Prize – for his outstanding contribution to meteorology. He will deliver a scientific lecture at the WMO Executive Council in 2021.

“These awards pay tribute to the fruitful collaboration between WMO Secretariat and the Executive Council chaired by David Grimes as President of WMO at a time when the Organization strengthened its scientific input to international climate change negotiations and increased awareness of the impact of rising global temperatures, ocean heat, extreme weather, ice melt and receding glaciers,” said WMO Secretary-General Prof. Petteri Taalas.

He served as Canada's permanent representative to WMO in 2006 and was appointed Assistant Deputy Minister for MSC in 2007.  Under his leadership and vision, MSC obtained significant new funding to upgrade the infrastructure and modernize the monitoring networks, radars, weather warning and forecasting systems, and the supercomputer.

Mr Grimes was active in WMO and other international forums for over 30 years. He has been among Canada’s negotiators for the United Nations Framework Convention on Climate Change (UNFCCC) and participated in the Intergovernmental Panel on Climate Change (IPCC).