WMO highlights the gendered impacts of weather and climate 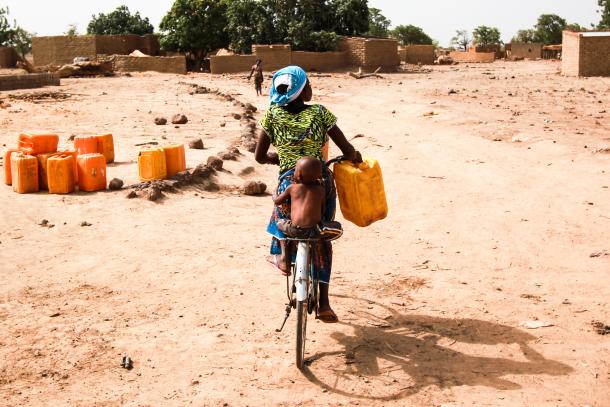 WMO highlights the gendered impacts of weather and climate

WMO Third Vice President Agnes Kijazi, Permanent Representative of the United Republic of Tanzania, discussed some of its findings at a side event at the UN Climate Change Conference, COP25, on 11 December. The event followed up to the September 2019 Climate Action Summit gender equality initiative and presented examples of gender-responsive national plans/policies/strategies, and examples of data, evidence, tools and methodologies. It demonstrated how respecting, protecting, and fulfilling women’s rights, advancing gender equality, and empowering women strengthens the implementation of climate actions and enhances climate mitigation and adaptation outcomes. 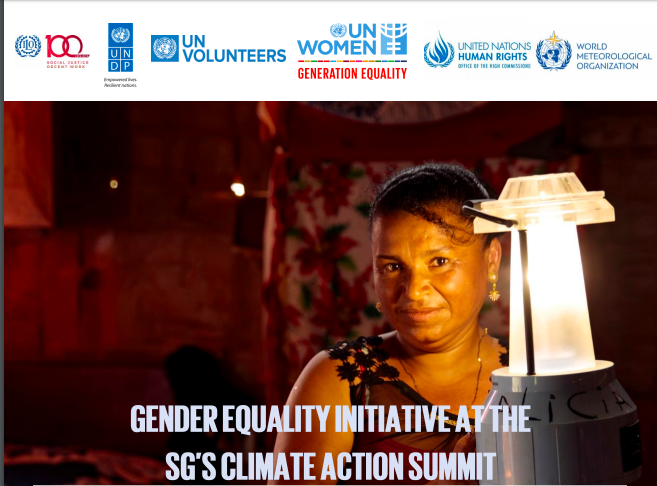 The WMO report was conducted in partnership with the Graduate Institute of International and Development Studies, Geneva.

It is based on 18 case studies and explores the experiences of different groups of women and men at the intersection with other social categories like age, economic status, location, disability, or marital status. It also analyzes gender relations and roles in two climate-sensitive sectors: (1) disaster risk reduction and (2) agriculture and food security.

The publication provides practical recommendations on the provision of gender-responsive services in terms of content, dissemination channels and feedback mechanisms, with the overall goal of enhancing adaptive capacity and reducing negative impacts of weather and climate.

Weather and climate impacts are not gender neutral

One of the main recommendations is to go beyond the approach of examining women and men as two homogenous groups. It is common knowledge that climate and weather impacts are not gender-neutral. But other social determinants such as age, economic status, disability, geographic location and marital status interact with gender to shape people’s experiences of climate change.

Evidence from Fiji and Bangladesh shows that older women and women with disabilities are among the most affected groups during and in the aftermath of disasters. They may need home visits by social groups to inform them about upcoming disasters and provide protection. Television broadcasts could also add sign language to warnings, and text messages could be sent targeting the hearing impaired.

A study in Tanzania showed that widows, especially the elderly and illiterate, are the most vulnerable to the impacts of climate change due to a low adaptive capacity.

The evidence on men’s vulnerability is still scarce and selective, referring mostly to male migration in search for new livelihoods, increased psychological stress and disproportionate impact during heat waves and floods.

Multiple examples show that women have significantly lower access to climate information, early warning and agricultural extension services. In Bangladesh, during the 2007 Cyclone Sidr, female-headed households and women whose husbands were away fishing did not receive the warnings, because they were given in the marketplace which was distant from their homes. Most women in Botswana also lack access to agricultural extension services, credit and training in new technologies.

Similarly, the understanding of both risk and scientific material may vary between women and men. For example, while the Pacific women were more aware of the seriousness of climate change, a significantly smaller proportion trusted scientific information. This highlights the importance of various media sources in information dissemination leaving no one behind.

The study suggests that it is essential to narrow the gap between male and female users in terms of access, perception and response in order to achieve gender-responsive climate action.

Gender differences usually exist in terms of needed types and content of information. A study in Kaffrine, Senegal, showed that all farmers need information on seasonal onset of rains, length of rainy season and warnings on rainfall-related hazards. Female farmers additionally require information on rainfall deficit forecasts and early seasonal rainfall cessation, which can be devastating for them given that they plant their plots a month later than their male counterparts.

Therefore, decisions regarding the content of the messages and the channels of delivery should be taken based on assessments that clarify women’s and men’s priorities and needs. 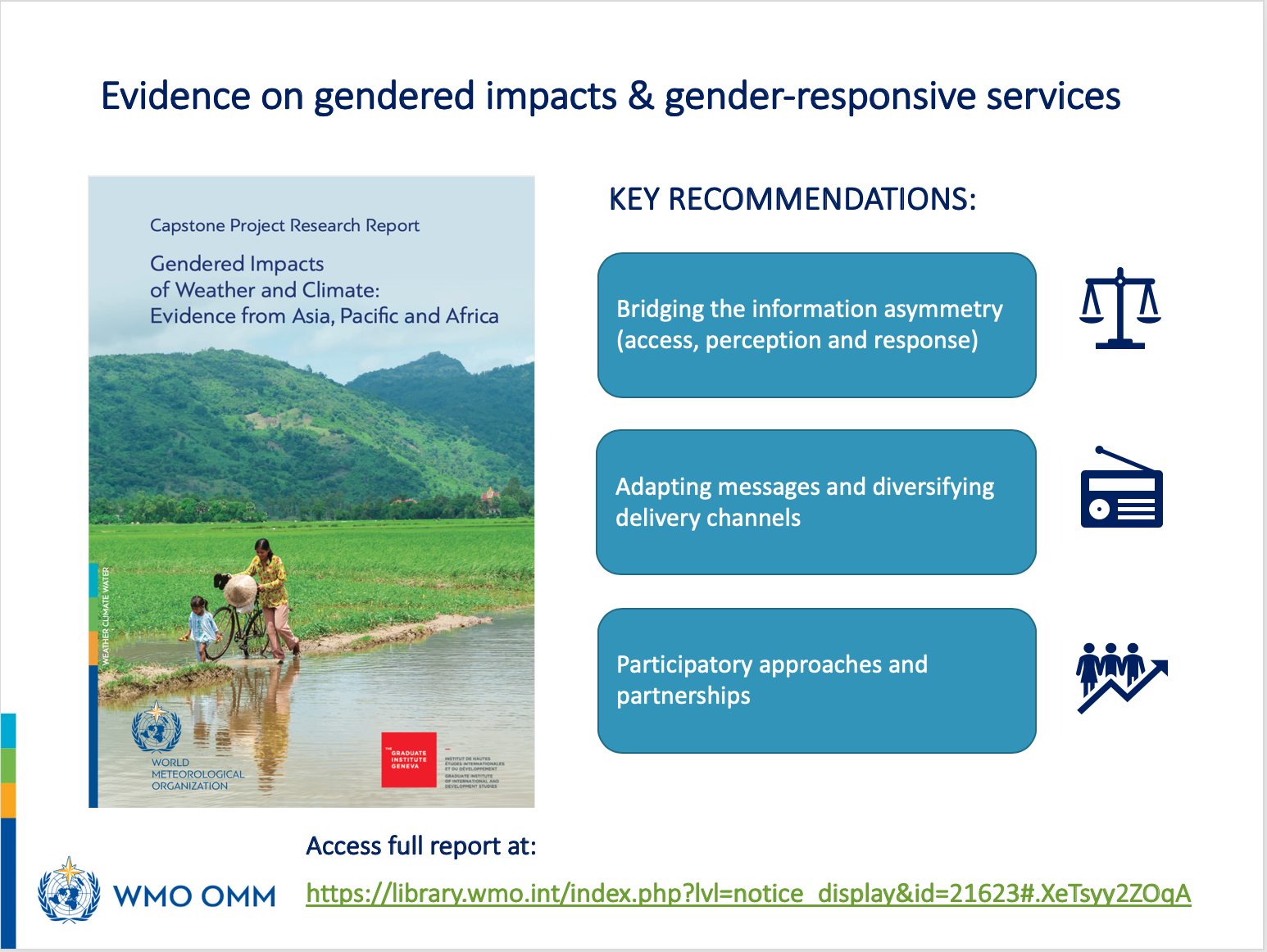 In many cases women prefer traditional communication tools. Radio remains the mass media reaching most people in the world, with 75% of households in developing countries having access to it. It has also emerged as the most accessible tool for grassroots women in Africa, because it is affordable, easy to use and does not interfere with their work schedules.

There is huge potential in making digital technology equally accessible to women.

For example, timely weather-based agro-advisories delivered through mobile phones have proven beneficial for gender-inclusive agriculture in India. In Nigeria mobile phones are already distributed by the government to rural farmers for better access to climate-smart agriculture information from extension workers.

80% of women in low- and middle-income countries now own a mobile phone, which represents a significant increase since 2014, but more needs to be done to close the mobile gender gap.

Cooperation among the different institutions responsible for early warnings and climate information (including NMHS) with intermediaries, such as civil society, the media, schools, universities and community-based organizations, is essential to expand the reach of information to all.

Effective communication should also encourage participation and feedback. Partnerships with grassroots women’s groups and female community mobilizers have proven effective in this regard.

For example, Women’s Weather Watch, an inter-operable communication system in Fiji, engages female leaders to deliver simplified weather alerts and early warnings to disadvantaged women and groups from remote areas. Women are not only better prepared to respond to disasters but are also empowered to engage in community-based disaster management.

The report comes ahead of the 25th anniversary of the Beijing Declaration and Platform for Action.

Knowledge generation and the provision of gender-responsive services based on a better understanding of the gender-specific aspects of weather, hydrological, climate and environmental services are central pillars of the updated WMO 2020-2023 Gender Action Plan. WMO will continue to develop the evidence and knowledge base on gender and climate as empirical data remains fundamental for better informed decision-making and for prompting gender-responsive climate action at all levels.

The report is available here