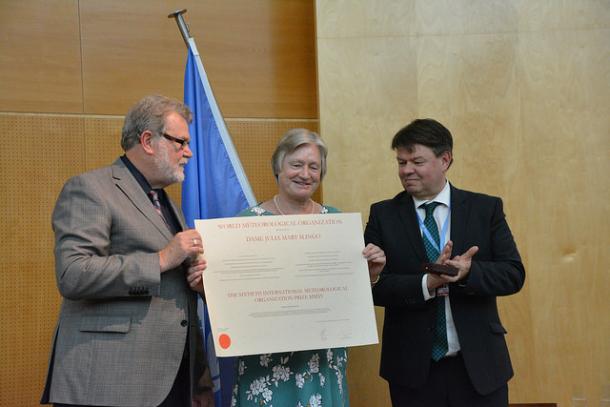 The World Meteorological Organization has presented its top award, the IMO Prize, to Professor Dame Julia Slingo DBE, chief scientist of the Met Office in the United Kingdom,  for her outstanding contribution to climate science. She is the 60th IMO laureate.

The IMO Prize is the most important award in meteorology and is named after WMO’s predecessor organization the International Meteorological Organization.

“Julia Slingo has been a beacon in the world, highlighting the value of climate science and services and enabling us to better predict extreme weather,” said WMO President David Grimes at the award ceremony during the annual WMO Executive Council meeting.  “She is not just a scientist but a pioneer in science.”

Ms Slingo has been Met Office chief scientist since February 2009, leading a team of more than 500 scientists working on a broad portfolio of research that underpins weather forecasting, climate predictions and climate change projections.

During a long career in atmospheric physics and climate science, she worked at the Met Office (UK), the European Centre for Medium-range Weather Forecasts and the National Center for Atmospheric Research (USA).

In a scientific lecture delivered to the Executive Council, Ms Slingo said there had been an “amazing transformation” in climate science in the past 40 years.

“We have seen earth observations; the growth of the use of computer models, not just in numerical weather prediction but also in climate change; the role of the Intergovernmental Panel on Climate Change in setting the agenda on the mitigation of climate change; and the evolution to really detailed information that we can provide to society on the risks they face from weather and climate not only hours ahead but decades ahead. “

“At the end of the day it is our science which provides the services which are needed by society,” Ms Slingo said in a video interview. She said the next big challenge for climate science will be “all about the weather.”

“When we look at the challenges the world faces with climate change and natural climate variability, it is all about high impact weather, that’s why the role of the WMO in this whole agenda on climate change is so important because it will be about extreme weather because that will be what will determine our future and manifest itself as some of the biggest risks we face,” she said.

WMO Secretary-General Petteri Taalas hailed the role Ms Slingo in providing cutting-edge climate science to inform decision-making at the highest level, including during the negotiations which led to the Paris Climate Change Agreement. He has named her his special advisor on climate.

The award was presented to Ms Slingo during the Executive Council meeting.

It consists of a 14 carat gold medal featuring the WMO emblem, a scroll, and a cheque.