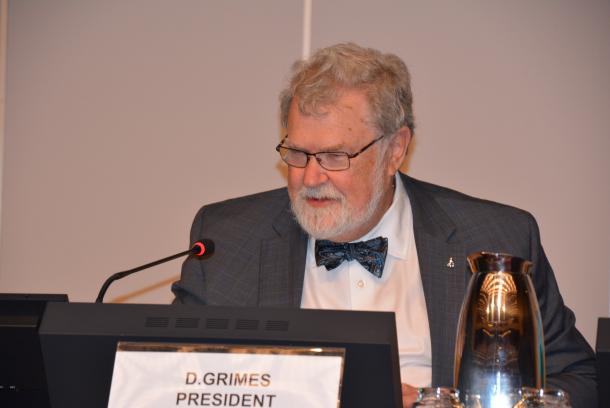 Saluted by a standing ovation, David Grimes of Canada wrapped up his second and final term today as the World Meteorological Organization’s President, after eight years that helped shape the future direction of the UN agency.

“This has been a historic journey for WMO,” WMO Secretary-General Petteri Taalas told the World Meteorological Congress, which groups the meteorological and hydrological services of 193 nations and territories.

“David has been able to create new structures for WMO,” he added, underlining that they had a “common vision for a modernized WMO”.

The ceremony took place on the final day of the 3-14 June congress, which has approved a package of sweeping reforms. On Thursday, Congress elected Gerhard Adrian, President of the Deutscher Wetterdienst, to be the next President.

Mr Grimes, who is Assistant Deputy Minister and head of Environment and Climate Change at the Meteorological Service of Canada, was first elected by the WMO’s membership in 2011, and won a second term in 2015.

“About 10 years ago, I wanted to make a difference to the world,” Mr Grimes told delegates. “I felt that I had the skills. I felt that I had the passion. And I had all of the interests of all of you in my heart. Maybe that has been part of the motivation that has made me work so hard over the last eight years.”

“Journeys are not made by one, they are made by many,” he added, thanking his family, his staff and the government of Canada, and the entire WMO community.

“We have been on this trip together. We have accomplished a lot. It’s been us as a community. I think we’ve moved ourselves to a place where the challenges are still formidable in front of us. We have these issues such as climate change and other aspects that still need the good fight and still need the strong foundation, the evidence that supports smart decision-making and smart policy development.”

During his first WMO term, Mr Grimes played what Mr Taalas today said was a “unique role” in leading the development and subsequent adoption of the Global Framework for Climate Services.

Other notable achievements during his tenure have been a sharper focus on the polar regions, and the development of the Global Cryosphere Watch.

Canadian Ambassador Tamara Mawhinney lauded Mr Grimes for his “tireless work” on polar regions and mountains, his commitment to meeting the demand for “credible and authoritative information to support climate-smart decisions”, and his “whole of society approach to our shared commitment to protecting people and their livelihoods from the impacts of extremes” by enhancing partnerships with the private sector and the broader scientific community.

“Last but not least, he has positioned the WMO itself to best serve the global community today and the future,” she added.

Mr Grimes is a career meteorologist. He has held his current post at the Meteorological Service of Canada since July 2006.

His leadership has resulted in its transformation and modernization, including a realization of substantial investments into the service. Over his 40-year career with the service his accomplishments – in weather forecast operations, the Canadian Climate Centre and science-policy development – have been many.

Mr. Grimes has been active in the WMO and other international forums for some 30 years. He has been among Canada’s negotiators for the United Nations Framework Convention on Climate Change (UNFCCC) and participated in the Intergovernmental Panel on Climate Change (IPCC).

Mr. Grimes has also served as Canada’s Permanent Representative to the WMO since December 2006.