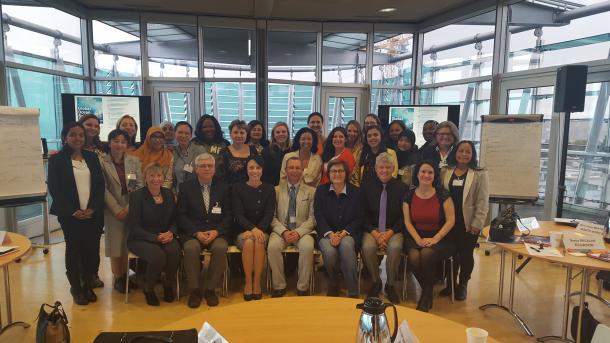 As a token of its commitment to gender equality and the empowerment of women, the WMO-IOC Joint Technical Commission for Oceanography and Marine Meteorology (JCOMM) kicked off its fifth session with a Women’s Marine Leadership Workshop. Twenty-four female marine meteorologists and oceanographers from 22 countries joined the two-day event which took place at the WMO Headquarters in Geneva, Switzerland, on 21 and 22 October 2017. The majority participated in the subsequent Marine Technical Conference and JCOMM-5, thus gaining invaluable hands-on experience in participating in international cooperation meetings.

“We need to bring in more women in governance and management,” said WMO Deputy Secretary-General Elena Manaenkova. “Women bring diverse ideas, knowledge and expertise which make for better decision making, more equitable distribution of resources, and better performance,” she added. Through the workshop, WMO sought to build a cohort of female leaders in the marine and oceanographic community, who would join the Commission's structures and contribute to its scientific work.

“I am now realizing that being a woman leader is an amazing opportunity in life,” exclaimed Anni Arumsari Fitriany, a workshop participant from Indonesia.

The curriculum was geared towards strengthening the soft skills of mid-career marine meteorologists and oceanographers from WMO and IOC Member states, with a focus on communications, strategic influence, conflict management, negotiations and consensus-building. The method involved interactive exercises and situation scenarios. Individual coaching sessions were also offered at which participants obtained personalized feedback, discussed career goals, and devised action strategies.

“I got to see my stronger and weaker points, and my style of leadership in relation to my own culture,” noted Sandra van Dijke-Langezaal from the Netherlands. “I go home with lots of new self-insights, wisdom and inspiration to incorporate in my day-to-day business,” she added. Chantale Bijoux from the Seychelles echoed her feelings. She particularly appreciated the practical exercises which were “an eye-opener” for her. Equipping participants with a set of tools on how to effectively lead in an authentic way was among the most valuable aspects of the training, according to Elke Louw, the participant from New Zealand.

The Women’s Marine Leadership Workshop laid the foundations of a network of female marine meteorologists and oceanographers. “Even though the world is covered 70% by water, the number of women involved in marine is just a mere drop,” said Elke Louw. “We really need to advocate and support each other more.” The participants were astonished by the huge similarities encountered in terms of the career and day-to-day issues faced by women in the workplace, regardless of geographical location and culture.

The event concluded with an informal discussion at which Nadia Pinardi, Co-President of JCOMM, and workshop participants spoke about their personal experience, success, challenges and lessons learned throughout their careers and their paths into leadership. Striking a balance between developing one’s technical competencies and actively participating in international scientific cooperation was Professor Pinardi’s key to success and piece of advice to female professionals.

"Our training and the shared experience created a network of dynamic and strong allies from around the world which I have the sense will endure for my life time. The dedication and commitment of these strong women will certainly propel them towards greater leadership roles and the skills taught in the training will lend to their success.  I recommend that WMO and IOC continue training women and men about the importance and essential nature of the contributions of women, aka about half of the human population, should have in the sciences aimed at solving the current problems on our planet.  We cannot bring innovation and change without all our contributions," said Jennifer Lewis from USA.
Remarkably, a 20 percent increase in women representation was registered at JCOMM-5. The proportion of female delegates soared from 17 percent at the latest JCOMM session in 2012 to 37 percent at JCOMM-5 in 2017. At the Marine Technical Conference, close to half of the participants were women. “We are proud to be leading such a transformative change,” said Johan Stander, Co-President of JCOMM. He further recommended conducting similar workshops at the regional level, offering tailor-made scholarships and bursaries to women as well as considering gender in succession planning.
The workshop was sponsored by the National Oceanic and Atmospheric Administration (NOAA) of the United States of America, the UK's Met Office, Environment Canada, and the Indonesian Agency for Meteorology, Climatology and Geophysics (BMKG).