WMO Invests in a Generation of Female Leaders in Agricultural Meteorology 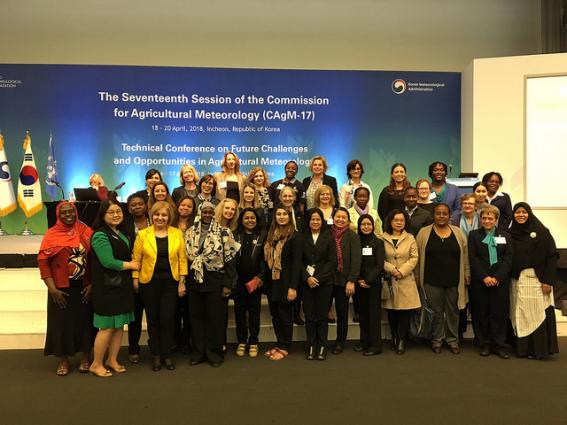 WMO Invests in a Generation of Female Leaders in Agricultural Meteorology

The World Meteorological Organization (WMO) is continuing its drive to build broad-based female leadership to ensure strong and inclusive governance.

To this end, WMO has organized a series of Women’s Leadership Workshops targeted at female delegates to WMO constituent body meetings, in implementation of the Organization’s Gender Action Plan. The third such workshop took place on 14-15 April 2018 ahead of the Commission for Agricultural Meteorology (CAgM-17) in Incheon, Republic of Korea.

The Women’s Agrometeorology Leadership Workshop brought together 35 female agricultural meteorologists and researchers from 33 WMO Members from around the world. Participants learned and practiced important techniques for leadership, presentation and negotiation skills and alliance building.

The Women’s Agrometeorology Leadership Workshop laid the foundations of a network of female agricultural meteorologists and researchers. “It was wonderful to meet and hear all the stories from the inspiring women working in my field from around the world,” noted Lynette Bettio from Australia.

Remarkably, a 16-percent increase in women representation was registered at CAgM-17. The proportion of female delegates soared from 21 percent at the latest session in 2012 to 37 percent at CAgM-17 in 2018. Also, CAgM-17 selected its Management Group for the 2018 to 2020 period which, for the first time, is more than 50% female.

In opening the workshop, the Permanent Representative of the Republic of Korea to WMO, Dr Jaecheol Nam, stressed the importance of using the full capacities of both women and men to meet development challenges and serve communities. He described the workshop as “one of the most influential efforts to increase the visibility and attractiveness of careers for women in weather, climate and water.”

“I was able to gather a set of skills that I am able to apply in my workplace and thereby become an effective leader,” noted Surekha Ramessur from Mauritius.

“I have gained greater confidence in myself,” remarked Shontelle Stoute from the British Caribbean Territories. “We were encouraged to express ourselves and in doing so stepped out of our comfort zones and gained self-confidence.”

As a result of the workshop, Adamou Aissatou Sitta, a participant from Niger, said she assumed a new leadership attitude. By adopting the “just do it, do not fear failure” rule, she became considerably more self-assured. She also started paying more attention to capabilities that she was not even aware of.

“I try now to know my brand and establish wider and diverse networks,” said Jong-Sook Park from the Republic of Korea. The workshop changed her idea of leaders as tough and perfect.

Cultural diversity also came to the fore. The participants were astonished to discover how many challenges they had in common, regardless of geographical distance and boundaries.

Participants were further stimulated by the diverse cross-cultural exchange. They discovered a multitude of professional challenges and day-to-day issues that they had in common. “The opportunity to know women’s experiences of different cultures, with a common area of work, allowed me to understand that no matter the geographical separations, the same essence of a woman, with worries, difficulties, dreams and strengths, always unites us,” observed Andrea Acevedo Nuñez from Chile.

The event concluded with an informal discussion at which workshop participants spoke about their personal experience, success, challenges and lessons learned throughout their careers and their paths into leadership. All 35 participants participated in CAgM-17 as delegates, thus gaining invaluable hands-on experience in participating in international cooperation meetings.

The workshop was sponsored by the UK’s Met Office, the University of Southern Queensland, Australia, and the Korea Meteorological Administration.