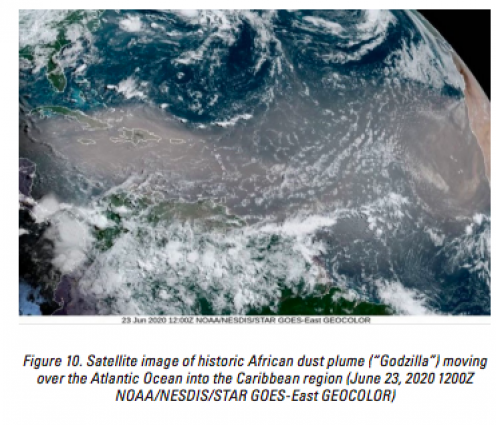 WMO has issued its annual Airborne Dust Bulletin on the incidence and hazards of sand and dust storms in 2020. The impacts on health, the environment and economies have been highlighted once again this year as massive sand plumes have darkened skies and affected air quality in many parts of Africa, Asia, the Americas and Europe and travelled hundreds of miles over the Atlantic.

Forecasts have improved greatly thanks to the WMO Global Sand and Dust Storm Warning Advisory and Assessment System (SDS-WAS), which coordinates international sand and dust research. It is the longest-running such initiative and has led to the establishment of operational regional centres.

“Sand and dust storms are a very visible and impactful hazard. In the past few months alone, we experienced brown snow in European mountains, choking air quality in large parts of China, and a huge plume drifting from the Sahara all the way to South America. These are just a few examples,” said Oksana Tarasova, Head of WMO’s Atmospheric Environment Research Division.

“Fortunately, advances in satellite and ground-based observations and  computer modelling has greatly enhanced our ability to issue early warnings. WMO is now stepping up to meet new scientific and operational challenges in the next five years (2021-2025) to support disaster prevention, mitigation and adaptation choices. High impact events such as sand and dust storms and wildfires has increased in some parts of the world and is projected to rise further as a result of climate change and environmental degradation,” said Dr. Tarasova.

WMO is part of a UN coalition to combat sand and dust storms and published the Airborne Dust Bulletin ahead of the UN Food Systems Summit Science Days on 8 July. 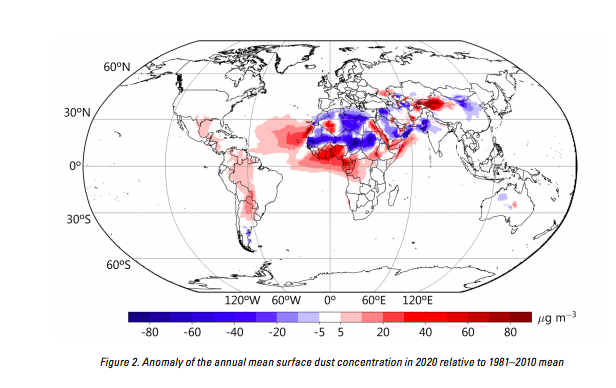 The Airborne Dust Bulletin provides an analysis of the global distribution of mineral aerosols in 2020, as well as a focus on specific events.

Mongolia: Influenced by a cyclone and surface cold wind, a sand and dust storm swept Mongolia and central and northern China from October 19 to 21, 2020. This was the episode with the largest impact area in 2020, hitting Mongolia and widespread parts of neighbouring China.

Asian sand and dust storms usually occur in spring from March to May. The extended event last autumn was a rare phenomenon. Multiple numerical SDS forecasting systems at the Asian regional node successfully forecasted this episode.

Canary Islands (Spain): A record event in the history of Canary Island dust intrusions occurred on 23 February 2020.  Hourly concentrations of PM10 -  a particulate matter which can penetrate into the lungs causing respiratory problems and disease - exceeded 3000 µg/m3 at the peak, led to the cancellation of 1000 flights, harmed air quality, and caused disruptions in  agriculture, solar energy production (around one million Euros loss) and ecological systems with an unprecedented irruption of birds and invertebrates to the islands from the neighbouring African continent.

Sahel: The last winter season in Africa’s Sahel region was exceptional and was characterized by intense sand and dust storm activity and high levels of surface dust concentration.

Caribbean: During the summer of 2020, the Caribbean region felt the effects of an historic African (Saharan) dust plume that has been called “Godzilla” due to its large geographic extent and record amount of dust. This plume, with an area close to the size of the continental USA, blanketed areas in the greater Caribbean Basin, northern South America, Central America, the Gulf of Mexico and the southern United States. It affected the region for about 15 days (18 June - 2 July 2020).

Both the US Environmental Protection Agency (EPA) air quality standard and the World Health Organization (WHO) air quality guidelines were exceeded. 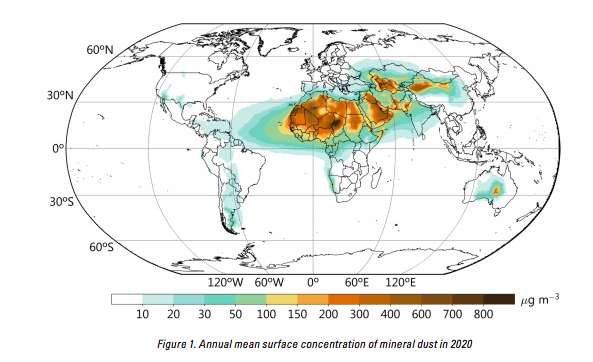 The occurrence and progression of this “Godzilla” event was predicted by several dust forecast models.

One of the major regional developments this year is the funding of a new ensemble dust forecasting project by the US National Aeronautics and Space Agency (NASA), in partnership with WMO SDS-WAS Pan American Center, WHO/Pan-American Health Organization, and several federal and local agencies, to provide real-time forecasts of dust storms and wildfires over North America. Although air quality continues to improve in this region, the frequency of high-impact extreme events, such as dust storms and wildland fires, has increased rapidly in the past decades and is projected to rise further in response to climate change.