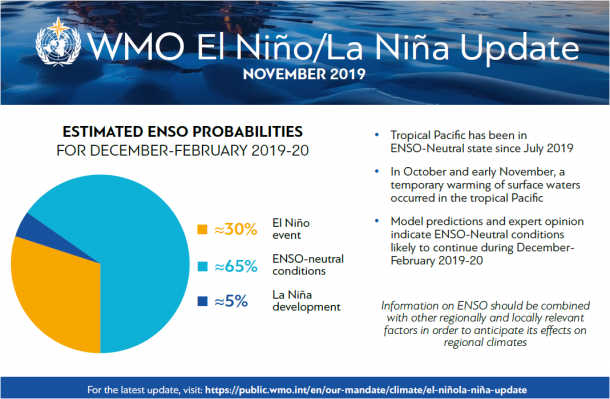 Given current conditions and model outlooks, the chance of ENSO-neutral conditions prevailing during the period December 2019 through February 2020 is estimated at about 65%, while the chances for El Niño and La Niña are 30% and 5%, respectively, according to WMO’s El Niño/La Niña Update.

Sea surface temperatures in the tropical Pacific have been neutral with respect to the El Niño-Southern Oscillation (signifying that neither El Niño nor La Niña have prevailed) since July 2019. During October and early November, sea surface temperatures warmed to near El Niño levels, but most tropical Pacific atmospheric indicators have remained neutral.

WMO Global Producing Centres of Long-range Forecasts (GPCs-LRF) indicate that sea surface temperatures are most likely to return to near-average levels after November and remain at ENSO-neutral levels into the first half of 2020.

In addition to the El Niño Update, WMO has also produced a Global Seasonal Climate Update for the forthcoming December-January-February 2019-20 period. This is in pre-operational phase and is intended as guidance for Regional Climate Centres and National Meteorological and Hydrological Services (NMHSs).