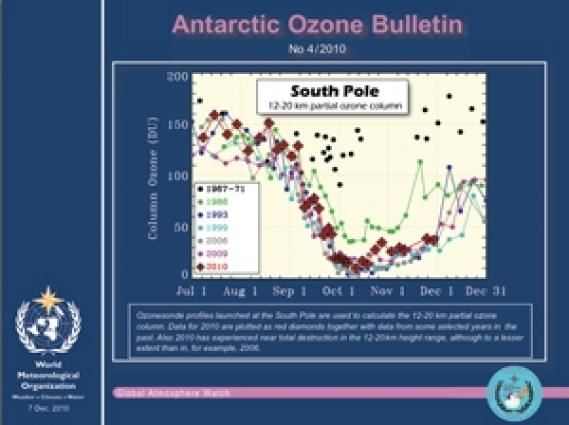 WMO’s new Antarctic Ozone Bulletin provides the latest update on the state of the annually recurring ozone hole. It says that the Antarctic polar vortex (a large low-pressure system where high velocity winds circle the Antarctic continent) was still depleted early December, although no new depletion was occurring.

Antarctic ozone holes are expected to reoccur annually as long as the stratosphere still contains an excess of ozone depleting substances due to the long atmospheric lifetimes of these compounds. Thanks to the Montreal Protocol, ozone depleting gases will slowly disappear from the atmosphere over the next decades.

The latest issue of the Ozone Bulletin reports observations from nineteen stations, with special emphasis on ground-based and balloon measurements. WMO and the scientific community will keep a close eye on the development during the coming weeks. The fifth and final ozone bulletin of the season will be issued in February 2011.

Click here for the pdf version of the Bulletin