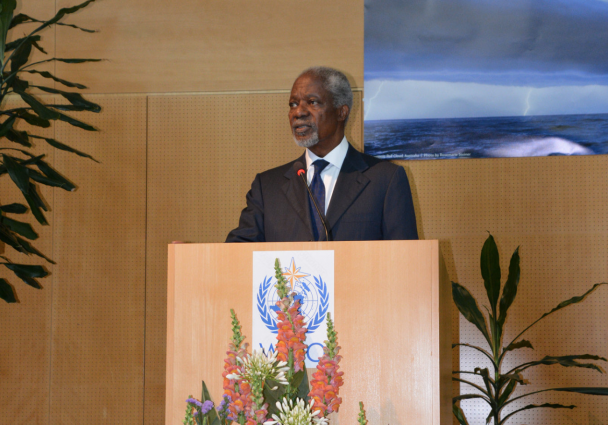 WMO expresses its condolences for Kofi Annan, former United Nations Secretary-General and founder and chair of the Kofi Annan Foundation, who passed away on 18 August 2018 in Geneva, Switzerland.

Born in Kumasi, Ghana on 8 April 1938, Mr Annan joined the United Nations in 1962 working at the World Health Organization in Geneva. After being employed in several capacities within the UN, he rose through the ranks and was appointed the first African United Nations Secretary-General on 13 December 1996. In 2001, Mr Annan and the United Nations were jointly awarded the Nobel Peace Prize for their work for a better organized and more peaceful world. He later founded the Kofi Annan Foundation in 2007 and dedicated the remainder of his career to mobilizing political will to overcome threats to peace, development and human rights.

Kofi Annan was involved with WMO on several initiatives including water management, sand and dust storms, climate change impacts on health, and improving weather and climate services in developing countries.

He recently spoke at the Special Dialogue on Water during WMO Executive Council, helping to mobilize support and raise awareness on critical challenges related to water, that can only be addressed through close collaboration and partnerships. “We need to put much bigger emphasis on the effective, equitable and sustainable management of our water resources,” he told the high-level session. “Intelligent water management should create benefits for everyone, as no one society can prosper long without sustainable access to clean and sufficient freshwater. If sustainably managed across sectors and societies, water has the power to build trust between communities and contribute to the broader establishment of peace and development efforts,” said Mr Annan.

Mr Annan was passionate about taking action on sand and dust storms which adversely impact human health, the environment, agriculture and transport. “It is unconscionable that information that can help the health of people affected…is not available to them,” he stated in a WMO video played at the UN high-level General Assembly. Reflecting on his own experience growing up in Ghana, he knew first-hand how harsh the sand and dust storms could be. “The last time the harmattan swept through Ghana, I was there to see it. The skies were dark for days. I thought of the people in remote and rural areas, caught unaware by sudden storms of sand and dust. We have the means to help them — not just now but in the future, when climate change makes things worse — so we should join forces to do everything we can,” he said during an interview with Le Monde in 2016.

He also advocated to improve weather and climate services. “We need to place greater emphasis on providing people with the timely information they need to protect themselves from extreme weather. Early warnings of hazards can not only help communities respond and adapt to health risks posed by climate change, but also raise awareness of the causes and effects of climate change — and hence build public support for policies that strengthen resilience and mitigate against the impact of climate change.”