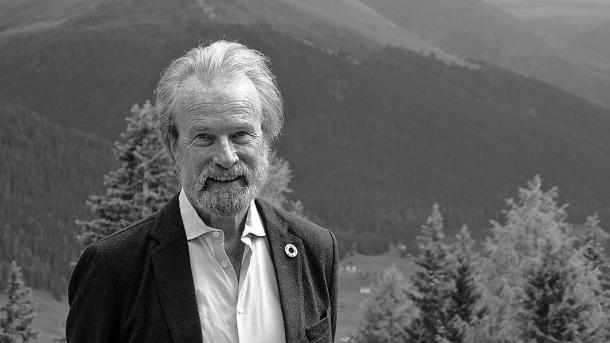 The World Meteorological Organization is greatly saddened by the tragic and untimely loss of Konrad “Koni” Steffen. He was one of the world’s leading authorities on climate change and the Greenland ice sheet. He fell to his death, aged 68, in one of the many crevasses which have appeared because of melting ice.

Professor Steffen was Director of the Swiss Federal Institute for Forest, Snow and Landscape Research (WSL) and a former director of the Cooperative Institute for Research in Environmental Sciences at the University of Colorado at Boulder. His passion was the polar regions and he devoted his career to research on climate change and the cryosphere in the Arctic and Antarctic.

“The poles of the Earth are of great importance for the climatic balance of our planet. More research and knowledge of how they work is urgently needed,” Steffen wrote on the website of WSL.

Professor Steffen was a much-loved and highly respected figure in the WMO community. A charismatic and eloquent speaker, he gave a keynote address at the 2019 WMO High Mountain Summit, which put the spotlight on the impact of climate change on the mountain cryosphere – glaciers, snow, ice and permafrost. 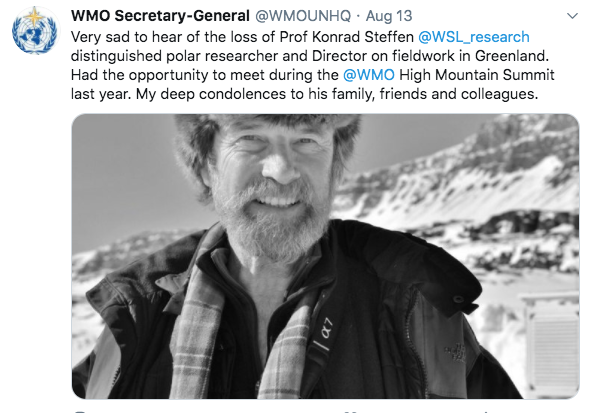 He contributed to the IPCC as a Lead Author on the Special Report on the Ocean and Cryosphere in a Changing Climate and on the landmark Fifth Assessment Report. He was a longstanding contributor to the World Climate Research Programme’s Climate and Cryosphere (CliC) Program and was chair of the Global Climate Observing System’s Observation Panel for Climate.

Professor Steffen was a pioneer in the monitoring of the Greenland ice sheet. Since 1990 every spring he went to the Swiss Camp meteorological base station in Greenland, where he worked with his colleagues collecting data on snow, ice and the atmosphere. As early as 2002, he was able to use his data to demonstrate the accelerating melting of the ice.

"During his entire career, the Swiss Camp in Greenland remained an affair of the heart for Konrad Steffen,” wrote Thomas Stocker, University of Bern climate researcher and a former IPCC Working Group co-chair.

“On the ice, he always lent a hand himself, repaired the weather station, set up GPS connections to satellites, negotiated with the helicopter pilots, or cooked for the crew. But he also cleverly used the Swiss Camp as an impressive memorial for climate change. Numerous ministers, members of US Congress, the former US Vice President Al Gore, the former Swiss Federal President Leuthard and many more have visited Swiss Camp, stepped onto the platform, and saw the vulnerability of the ice surface of Greenland with their own eyes," wrote Professor Stocker.

"In recent years, the surroundings of Swiss Camp have been transformed into a lake plateau in summer. Rivers connect the deep blue pearls, raging melt streams pour into so-called moulins and disappear into the depths of the ice sheet. Konrad Steffen treated the guests in his tent to espresso and chocolate while conveying the scientific facts of climate change. Anyone who stepped down from the platform after a few hours understood what the melting at Swiss Camp means for Greenland and the whole world. So every visitor became an ambassador for climate protection, » wrote Professor Stocker in an obituary in a Swiss newspaper posted on the WCRP website.

Professor Steffen attended ETH Zurich, from which he received a Diploma in 1977 and a Doctor of Science degree in 1984. He was a professor at the University of Colorado, at EPFL in Lausanne and at ETH in Zurich. He was a member of the International Glaciological Society, the American Geophysical Union and the American Meteorological Society.