WMO State of Climate report is “yet another strong wake-up call.” 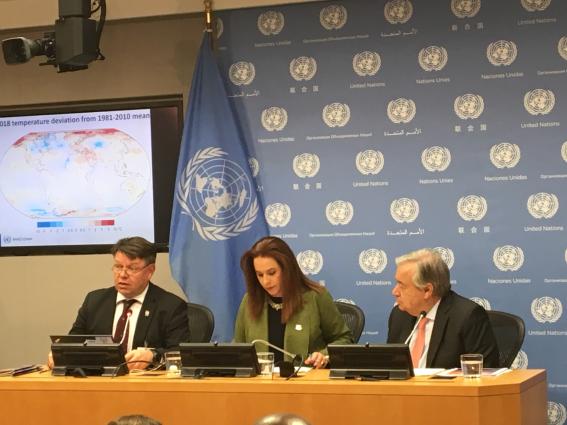 WMO State of Climate report is “yet another strong wake-up call.”

The WMO Statement on the State of the Global Climate in 2018 was formally launched at a joint press conference with the UN Secretary General, UN General Assembly President María Fernanda Espinosa Garcés and WMO Secretary-General Petteri Taalas on 28 March at United Nations headquarters in New York

“I have to say that, as Secretary-General of the United Nations, I am very proud of the work of the World Meteorological Organization.  It provides a very solid, scientific base for the analysis that is absolutely essential in relation to how climate change is evolving, and as a clear guide to our actions in the future,” said Mr Guterres.

The report, which made headline news around the world,  coincided with a high-level meeting on Climate and Sustainable Development for All convened by the President of the General Assembly. 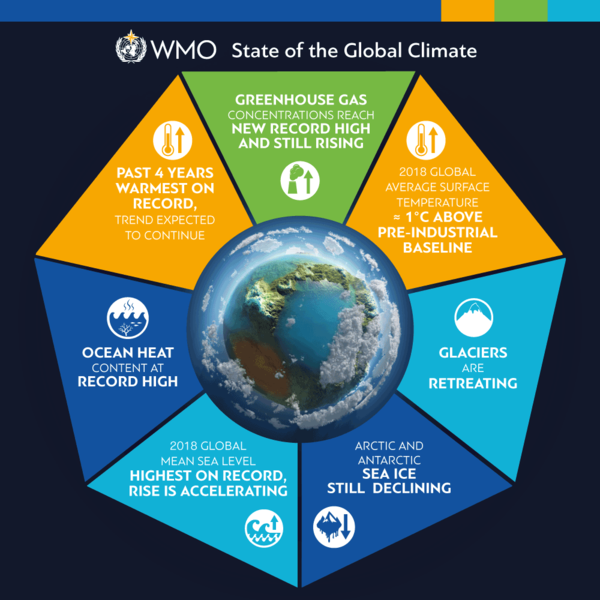 The WMO Statement on the State of the Global Climate in 2018, its 25th anniversary edition, shows how the physical signs and socio-economic impacts of climate change are accelerating as record greenhouse gas concentrations drive global temperatures towards increasingly dangerous levels.

At the press conference, Mr Taalas highlights record sea level rise, as well as exceptionally high land and ocean temperatures over the past four years. This warming trend has lasted since the start of this century and is expected to continue.

The WMO climate statement includes input from national meteorological and hydrological services, an extensive community of scientific experts, and United Nations agencies. It details climate related risks and impacts on human health and welfare, migration and displacement, food security, the environment and ocean and land-based ecosystems. It also catalogues extreme weather around the world.

The report will be one of WMO’s contributions to a Climate Action Summit at Heads of State level on 23rd September 2019. Mr Taalas has been appointed Chair to the Summit’s Science Advisory Group., which held its first meeting on 29 March.

“Second, we are seeing, more and more, the dramatic impact of extreme weather conditions. Last year, in the United States alone, we saw 14 weather- and climate-related disasters where the devastation cost more than $1 billion dollars each, with a total of some US$49 billion dollars. Worldwide, more than 35 million people were affected by floods. Cyclone Idai in southern Africa is a particularly stark recent example, as it was demonstrated,” said Mr Guterres.

“Third, the impact on public health is escalating. The average number of people exposed to heatwaves has increased by some 125 million since the beginning of the century, with deadly consequences. The combination of extreme heat and air pollution is proving increasingly dangerous, especially as heatwaves will become longer, more intense and more frequent,” said the UN Secretary-General.

“So, this report is indeed another strong wake-up call. It proves what we have been saying that climate change is moving faster than our efforts to address it,” he said.

Mr Guterres said the climate action summit on 23 September would seek to inject greater ambition into the fight against climate change.