WMO will verify temperature of 54.4°C in California, USA 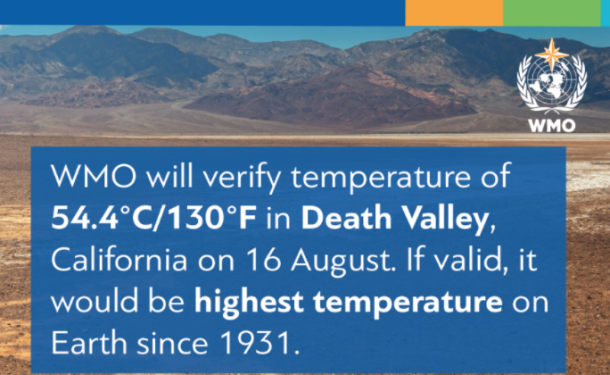 WMO will verify temperature of 54.4°C in California, USA

The World Meteorological Organization will verify a temperature reading of 54.4°C (130°F), recorded at Death Valley, California, on 16 August amid an intense and extensive heatwave on the west coast of the USA . If validated, it would be the highest temperature on Earth since 1931 and third hottest temperature ever recorded on the planet.

All the indications so far are that this is a legitimate observation. The equipment at Furnace Creek meteorological station is maintained regularly by the National Weather Service in Las Vegas. Preliminary findings indicate it was in proper working condition at the time of the observation.

WMO will now assemble an international team of atmospheric scientists to carefully examine the observation (including equipment and observation practices) for its Weather and Climate Extremes Archive.

To verify a new temperature record, the committee of experts has to examine the observation, the equipment, the calibration and observation practices, its correspondence to surrounding stations, etc.

“These investigations are quite detailed and take time so it is likely that there will not be a full completed evaluation for many months -- although at this time based on available evidence, we are preliminarily accepting the observation (pending the completion of a full examination,” said WMO Weather and Climate Extremes rapporteur Randall Cerveny. 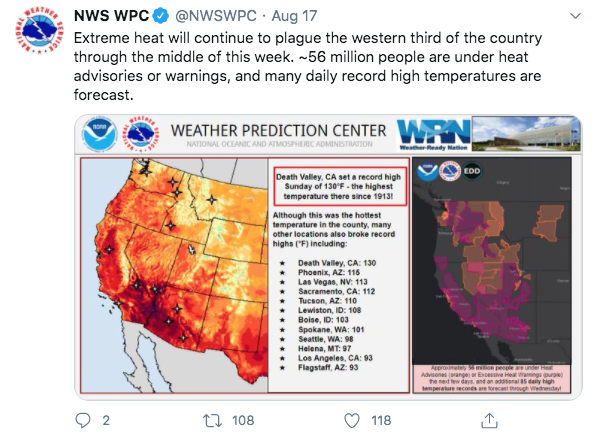 “We are in the midst of a long-duration extreme heat event. Another run at 130°F+ temperatures in Death Valley remains possible,” tweeted NWS Las Vegas.

The scorching conditions come amid a heatwave on the US west coast, with many new temperature records. More than 56 million Americans are under some sort of heat alert.

The National Weather Service warned that the sweltering heat will continue its grip in the western part of the United States, with widespread temperatures in the 100s, with 110s and 120s (high 30°C to high 40°C) in the Desert Southwest. Critical fire weather threats continue, with thunderstorms and gusty winds.

The heatwave has led to a huge strain on energy utilities.

The extreme high temperatures are part of a trend. As a result of climate change, temperature records are being broken more frequently than in the past. Heatwaves are more frequent and more intense. 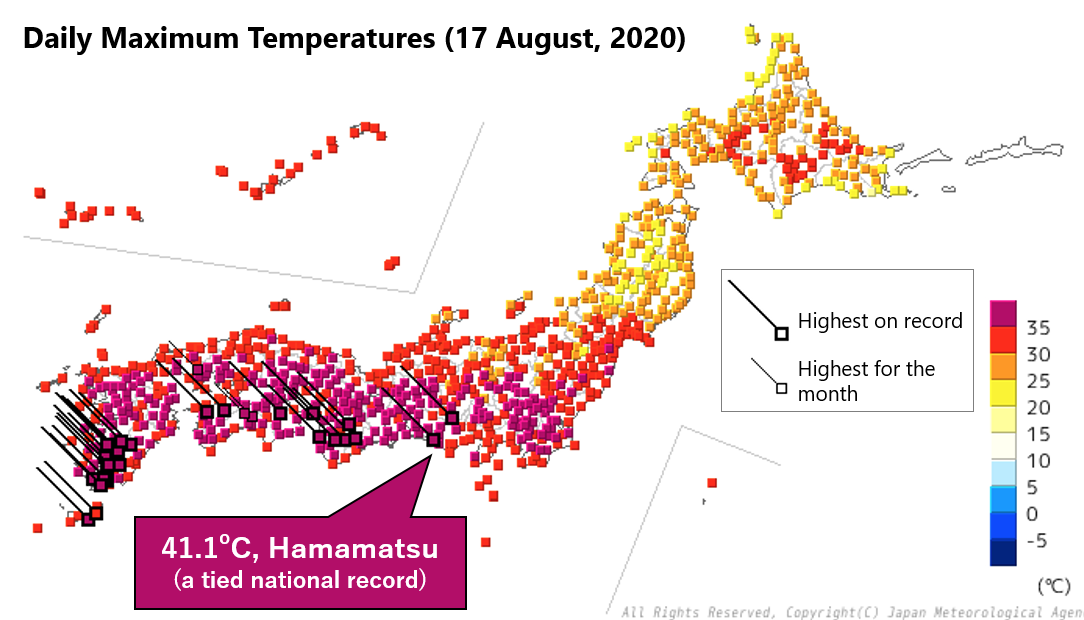 Western and Central Europe witnessed another heatwave, with a number of new station records in the second week of August. The warm air will move now to Eastern parts of Europe. Forecasts imply that there is some possibility that warm air might be stationary for 1-2 weeks especially over some western parts of Eastern Europe, namely Poland, Lithuania, Belarus, Ukraine and Moldova.

Japan on 17 August tied its national record, with 41.1°C recorded at Hamamatsu. The Japan Meteorological Agency alerts that the extremely hot weather conditions will continue to around 21 August in western and eastern Japan and the daily maximum temperature will exceed 35 degrees C in these areas. According to JMA's two-week temperature forecast and one-month forecast, warmer-than-normal climate conditions are expected to continue for the next month.

Siberia experienced a prolonged heatwave, with a recorded temperature of 38° Celsius on 20 June in the Russian town of Verkhoyansk. WMO is currently examining whether this is a new record for the Arctic Circle.

According to the Weather and Climate Extremes archive, the hottest temperature ever recorded was in Furnace Creek, Death Valley, California at 56.7°C on 10 July 1913. The highest temperature for the Eastern hemisphere was set in July 1931 in Kebili, Tunisia, at 55.0°C.

Some weather historians have questioned the accuracy of old temperature records. The WMO Archive for Weather & Climate Extremes is always willing to investigate any past extreme record when new credible evidence is presented.