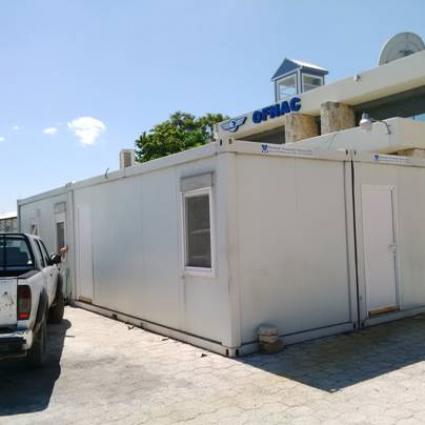 The World Meteorological Organization has taken action to improve the working environment of Haiti’s meteorological service as part of a wider initiative to strengthen forecast and early warning capabilities in the Caribbean nation and build its resilience to tropical cyclones, floods, droughts and other hazards.

Two additional prefabricated offices to replace ageing temporary containers have been delivered to the National Hydro Meteorological Services of Haiti to allow staff to operate more effectively as the 2014 North Atlantic Hurricane season approaches. In the longer-term WMO has agreed to construct new permanent headquarters for the service in an earthquake and hurricane proof building.

The initiatives come under the auspices of the Haiti Weather Systems Programme – Climate Services to Reduce Vulnerability in Haiti. The programme aims to rehabilitate and modernize the weather, climate and hydrology forecasting infrastructure which was destroyed by the 2010 earthquake.

The WMO-led programme will build capacity, including training of both scientific and technical personnel and developing a business plan for the NMHS. It aims to strengthen the climatological and hydrological observing networks and implement an integrated data management system. It will also develop a wide-reaching dissemination system, to inform decision makers, stakeholders and the general public of climate related risks.

The development of climate services in Haiti, the poorest nation in the Western hemisphere, will be an important test case for the Global Framework for Climate Services. This is a UN wide initiative, spearheaded by WMO, to provide accessible and informative climate services such as seasonal forecasts and drought monitors to help improve agriculture and food security, water management, disaster risk reduction and health outcomes in particular. About 70 countries in the world have inadequate climate services and some have none at all.

Haiti’s meteorological infrastructure was largely destroyed by the 2010 earthquake. For the past four years, support has been provided by a coalition of WMO Members including Canada, Cuba, Dominican Republic, France, the United Kingdom, the United States of America and the Caribbean Meteorological Organization.

Thanks to this support, Haiti now has a regularly updated website www.meteo-haiti.gouv.htto provide and disseminate weather information and forecasts to the local and international community. New forecasters have been trained and there has been a coordinated effort to extend the lead-time and improve the reliability of weather forecasts and warnings.

The new project under the Global Framework for Climate Services will consolidate existing progress and will pay particular attention to long-term sustainability.

Haiti is particularly exposed to natural hazards. It annually experiences two rainy seasons, from April to June and from October to November, as well as a hurricane season from early June until the end of November.

Hurricane Sandy devastated farmland and caused massive agricultural losses in 2012, setting back efforts to recover from the earthquake and Hurricane Tomas in 2010. Haiti was severely impacted in 2008 by four major hurricanes, Fay, Gustav, Hanna, and Ike, which killed nearly 800 people. In 2004 Hurricane Jeanne’s heavy rains caused massive flooding and landslides which killed more than 3000 people and affected about 300 000.