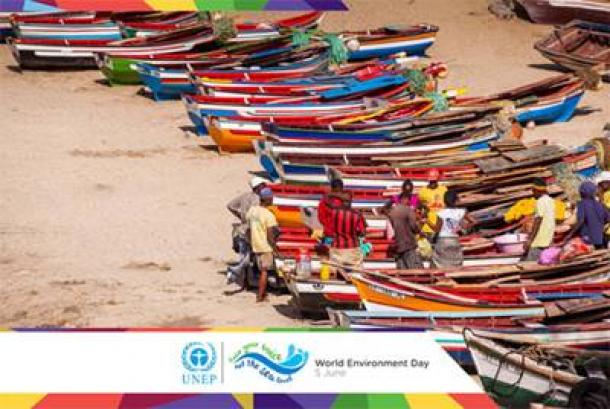 Raise Your Voice Not the Sea Level is the theme of World Environment Day 5 June, focusing on Small Island Developing States and climate change.

World Environment Day seeks to encourage worldwide awareness and action for the environment and is organized by the U.N. Environment Programme (UNEP). This year’s theme supports the UN designation of 2014 as the International Year of Small Island Developing States (SIDS) and aims to build momentum towards the Third International Conference on SIDS in September.

“Their combined annual output of greenhouse gases is less than one per cent of total global emissions, but their position on the front lines has projected many to the fore in negotiations for a universal new legal climate agreement in 2015. Others are leaders in disaster preparedness and prevention or are working to achieve climate neutrality through the use of renewable energy and other approaches,” said Ban Ki-Moon.

WMO is working to strengthen weather and climate services for SIDS and ensure that the ongoing implementation of the Global Framework for Climate Services meets their unique needs and supports sustainable economic development. The GFCS-SIDS partnership will be officially launched at the International Conference on SIDS in Samoa 1-4 September.

The GFCS is an international initiative being spearheaded by WMO and a wide range of U.N. partners in collaboration with governments and stakeholders to roll-out user-driven climate services such as seasonal forecasts. The GFCS supports effective climate risk management and adaptation to climate variability and change, with priority being given to agriculture and food security, water, health and disaster risk reduction.

SIDS are regularly exposed to extreme weather and climate-related hazards including, in recent months, tropical cyclones, coastal inundation, tidal surges, flooding and drought. Climate change and rising sea levels has increased the impact of these events.