The tenth anniversary of the earthquake, Tsunami and nuclear accident in Japan is being marked by ceremonies to mourn the victims and reflection on lessons learned, including stronger multi-hazard early warning systems and environmental emergency response coordination, to prevent a future tragedy.

“Today is a solemn day of remembrance for the 18,400 people who died or are still missing as a result of the Great East Japan Earthquake and Tsunami ten years ago. My condolences go to those who continue to grieve the loss of loved ones.  And I think of those who remain displaced, unable to return to their homes because of safety concerns surrounding the destroyed Fukushima Daiichi nuclear power plant,” said UN Secretary-General António Guterres in a message.

This triple disaster – with the earthquake and resulting Tsunami triggering the accident at the Fukushima Daiichi Nuclear Power Plant -  highlighted the need for a multi-hazard approach to disasters, in which risks are not viewed in isolation but as compound, interconnected, interacting, and cascading. 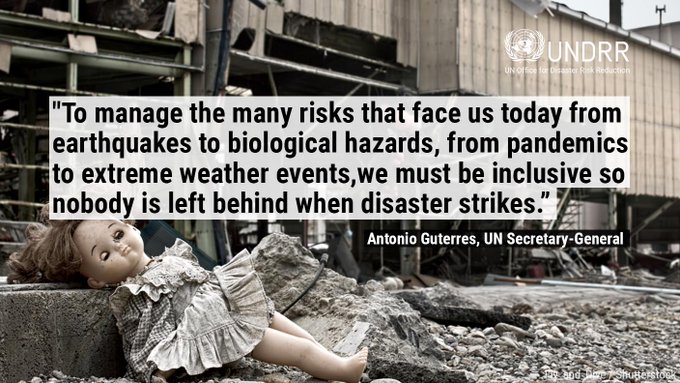 This multi-hazard approach underpins the Sendai Framework, the 15-year international blueprint for reducing disaster risk adopted in March 2015 at the Third UN World Conference on Disaster Risk Reduction in the Japanese city of Sendai.

“Japan is leading the world when it comes to disaster prevention.  The country has invested heavily in building back safer over the last ten years. And it has helped to share the lessons learned for the future. The Sendai Framework for Disaster Risk Reduction, adopted six years ago, is a global blueprint for a safer world,” said Mr Guterres.

“To prevent and manage disasters, countries need to plan, invest, give early warnings and provide education on what to do,” he said.

In line with this, WMO has stepped up activities to promote multi-hazard early warning systems throughout the world. It is pioneering a Global Multi-hazard Alert System to increase and enhance the availability of authoritative warnings related to extreme and/or potentially high-impact weather, water and climate events – regionally and globally.

This functioned effectively in forecasting the spread of radioactive material through the provision of atmospheric trajectories and dispersions charts that corresponded to the times of the two explosions at the Fukushima nuclear power plant.

It showed that WMO Regional Specialized Meteorological Centres (RSMCs) with activity specialization in Atmospheric Transport Modelling (currently, RSMCs with specialized activity for nuclear environmental emergency response) had an important contribution to make in the response to nuclear environmental emergencies because of their 24/7 operational activities and their links to IAEA and Members to support their emergency services.

But the crisis also highlighted the need for more effective provision and use of scientific data and improved international coordination and communication.

As one of the many follow-ups, IAEA and other relevant UN organizations including WMO plan an International Conference on: A Decade of Progress after Fukushima-Daiichi: "Building on the Lessons Learned to Further Strengthen Nuclear Safety" in November 2021.

The conference will focus on looking back on the lessons learned, experiences shared, results, and achievements from actions undertaken by national, regional, and international communities following the accident; and identifying ways for further strengthening nuclear safety.

The devastating surge on the northeastern coast of the island of Honshu, led to the Fukushima nuclear disaster.

In the last century, tsunamis have claimed more than a quarter of a million lives, killing on average, around 4,600 per event, over the course of  58 recorded instances, according to UN figures.

UNESCO's Intergovernmental Oceanographic Commission (IOC) is “embarking on the very important developments in the tsunami warnings systems under a new campaign of the United Nations,” said Dr. Vladimir Ryabinin, Executive Secretary of the IOC-UNESCO.