World Meteorological Congress opens – with a tweet from space

World Meteorological Congress opens – with a tweet from space

“We rely on you, the world’s meteorologists to provide us with the scientific knowledge that leaders in government, business and and society at large need to make informed choices,” said U.N. Secretary-General Ban Ki-moon in a welcoming video message.

“As the global thermostat rises, meteorological services are more essential than ever. I look forward to working with you to advance bold climate action which will improve the lives of people and the health of our planet,” said the U.N. Secretary-General.

A tweet from astronaut Samantha Cristoforetti on the International Space Station welcomed the opening of Congress: 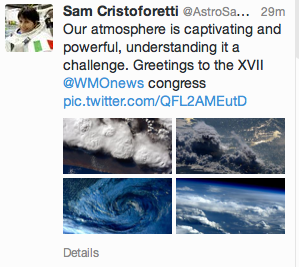 Congress will discuss the strategic role of WMO and National Meteorological and Hydrological Services in the post-2015 new global agenda on sustainable development and the Sendai Framework for Disaster Risk Reduction. It will also shape WMO’s contribution to the U.N. climate change negotiations taking place in Paris in December which aim to reach a new agreement to cut greenhouse gas emissions and prevent climate change from reaching dangerous levels.

“It is a pivotal year for action on behalf of future generations,“ said WMO Secretary-General Michel Jarraud. “We have more than a responsibility. We have a moral duty to take action to limit climate change. “If we don’t do it we will be judged by our children and our grandchildren.”

“National Meteorological and Hydrological Services have an important role to play in contribution to the post-2015 sustainable development agenda.”

Congress will consider progress in implementing the WMO-spearheaded Global Framework for Climate Services to improve the supply and use of climate services to help adaptation efforts. It will discuss cross-cutting programmes to meet the needs of urban areas, which will be home to 70% of the world’s population by 2050, risking exposure to multiple weather and water-related hazards and environmental stressors like pollution.

Other agenda items include: the WMO global observing and information system; risk-based warnings and high impact forecasting systems; capacity development and education and training; research on high impact weather, seasonal to sub-seasonal prediction, and polar prediction; and services to the aviation industry.

Given that three quarters of natural disasters are linked to meteorological extremes, WMO and its Members are on the “cutting edge” of disaster risk reduction, said Swiss Federal Councilor Alain Berset on behalf of the host country.

“We need reliable information on the climate, its state and its fluctuations. WMO is one of the organizations which provides this,” said Mr Berset.

Mr Berset said WMO has accomplished “exceptional work” and was a “model” for other international organizations.

He said that in order to achieve its mandate, WMO needed suitable resources. Switzerland is ready to increase its budgetary contributions, he said.

In addition to deciding on the Strategic Plan and budget, Congress will appoint a new WMO Secretary-General to replace Michel Jarraud, who will stand down at the end of 2015 after serving three terms in office. It will also elect the WMO President, Vice Presidents and members of the Executive Council.

“I am proud of our heritage and the improvements in our ability to warn and inform our citizens of weather, climate and water risks to keep them safe from harm, minimize negative impacts on their property and allow our economies to prosper,” said WMO President David Grimes.