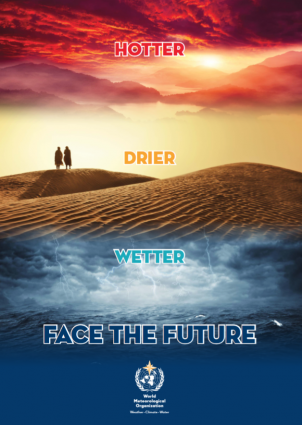 U.N. Secretary-General Ban Ki-moon has issued a rallying call on World Meteorological Day for decision-makers and all actors in society to “face the future now” and respond to the challenge of climate change and so avert its worst impacts and “lay the foundations for a world of peace, prosperity and opportunity for all.”

The theme of the 2016 World Meteorological Day, on 23 March, is Hotter, Drier, Wetter. Face the Future.

Each of the past several decades has been significantly warmer than the previous one. The period 2011–2015 was the hottest on record, as was the year 2015 – with an extra boost from a powerful El Niño. The record breaking trend has continued in 2016. Rising temperatures only tell part of the story. Climate change is increasing the frequency and intensity of extreme events like heatwaves, droughts and heavy rainfall. These provide a foretaste of the future.

“Concentrations of greenhouse gases in the atmosphere continue to rise.  So too does the temperature of oceans and land.  Climate change is accelerating at an alarming rate,” said Ban Ki-moon in a message.

“The window of opportunity for limiting global temperature rise to well below 2 degrees Celsius – the threshold agreed by world governments in Paris in December last year – is narrow and rapidly shrinking,” said the U.N: Secretary-General.

“The effects of a warming planet will be felt by all.  Sea levels are rising, and extreme weather is becoming the new normal.  Heavy rain and floods will put more lives and property at risk.  Longer and harsher droughts will jeopardize food security, increase mortality and destabilize local and global economies.  Changing environmental conditions will increase the spread of many diseases,” said Mr Ban.

The tools to face the future and limit the worst impacts of climate change already exist. WMO and National Meteorological and Hydrological Societies are playing an essential role in building climate-resilient societies.

Because of past and present emissions, we must prepare for a future with more hot days, warm nights and heatwaves. This will affect public health and put a strain on societies. But health risks related to heat can be reduced through multi-hazard early warning systems that provide timely alerts to decision-makers, health services and the general public, said WMO Secretary-General Petteri Taalas.

Integrated drought management is needed to deal more proactively with droughts and provide decision-makers with guidance on effective policies and land management strategies. We also need to improve access to scientific knowledge and share best practices for coping with drought, he said.

Climate change is also increasing the risk of heavy rains and floods. “We can protect lives and property from such hazards through impact-based forecasts. This approach to disaster risk is the best way to empower emergency managers with information they can act on,” said Mr Taalas.

On 21 March, WMO issued the full report on the Status of the Global Climate in 2015.

It also collaborated with Climate Central to reach out to television weather presenters, highlighting the main findings of the climate report, including with a package of high quality graphics.

Details of the ceremony at WMO headquarters are available here