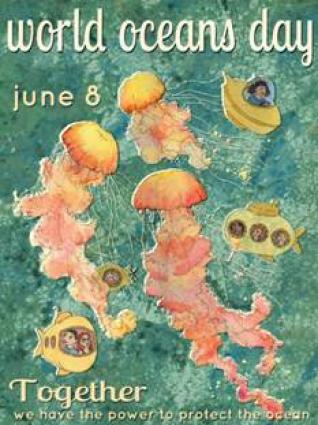 “Together, we have the power to protect the oceans” is the theme of World Oceans Day on 8 June, emphasizing the need for cooperation to safeguard our oceans which cover nearly three quarters of the Earth’s surface. As much as 40 per cent of the world oceans are suffering as a result of human activities which have caused pollution, depleted fisheries, and loss of coastal habitats. Oceans are absorbing more than 93% of the excess energy from human activities – the impact of which will be felt for thousands of years.

This year’s official ceremony focuses on the future sustainability of oceans. It takes place on 9 June, to coincide with the Meeting of States Parties to the United Nations Convention on the Law of the Sea and the commemoration of the 20th anniversary of its entry into force.

WMO takes an active role in the UN interagency mechanism UN-Oceans. The ocean – and its interaction with the atmosphere which shapes our climate – lies at the heart of many WMO activities. For instance, WMO is currently working to protect the global ocean observation system, which is vital to predict and monitor phenomena such as El Niño. It is improving forecasting and warning services for coastal inundation to address the risk of rising sea levels and extreme events. It is developing climate services for marine and coastal communities, including for coastal adaptation and disaster risk reduction.

Ocean-living resources provide a significant contribution to global food security. Fish comprises about 20 per cent of the animal protein in the diets of over 3 billion people. The contribution of fish to dietary animal protein can reach 50 per cent in the world’s poorest regions, and up to 90 per cent in Small Island developing states. As highlighted by the Fourth Assessment Report of the Intergovernmental Panel on Climate Change (IPCC), this important role of fisheries is threatened by changes to the environment associated with increased emissions of greenhouse gases, including higher water temperatures and increases in ocean acidification, changing marine fish distribution.

The WMO-spearheaded Global Framework for Climate Services is therefore seeking to extend climate services for the benefit of fisheries, given their importance to food security. It is also putting a special emphasis on the needs and vulnerabilities of Small Island Developing States (SIDS). To promote awareness of the importance of climate information products and services, WMO and the Food and Agriculture Organization of the U.N. (FAO) organized a recent event at U.N. headquarters in New York on “Fisheries, food security and climate services”.

Dr. Rohana P. Subasinghe, Senior aquaculture officer, FAO said that when the water temperature increases, northward migrations of fish occur. As a result, more fish will be concentrated in certain areas within the northern hemisphere.

Peru, which has less than 0.1 percent of the ocean surface but almost 10 percent of worldwide marine fisheries, is an example of a country impacted ocean warming from human-induced climate change as well as naturally occurring events such as the El Niño phenomenon (which was first noticed by Peruvian fishermen).

Dr. Paul Fernando Phumpiu Chang, Vice Minister for Fisheries, Ministry of Production, Peru, said that his country is closely watching the potential development of El Niño, which warms Peru’s coastal waters and  has traditionally led to dramatic reductions in the crucial anchovy catch.  He said that the 1997-1998 El Niño costed the Peruvian economy US$3.5 billion (or 5 percent of GDP).

Proper environmental monitoring systems coupled with climate change adaptation and early warning tools, based on sound scientific evidence, could do a lot in spreading awareness about the climatic changes and prepare farmers well in advance, the event heard. There is a need to establish long-term management plans taking ecosystem into account, said Alf Haakon Hoel, Research Director, Institute of Marine Research, Norway.

Information on the GFCS event