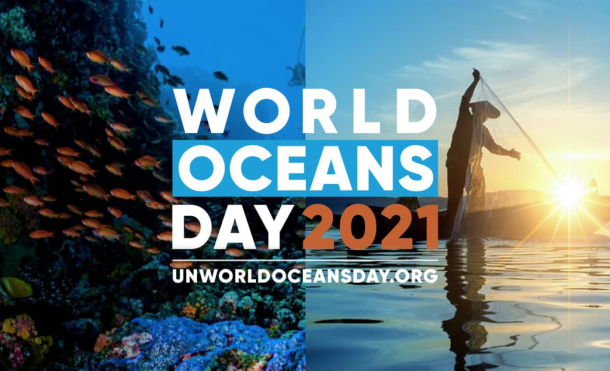 The ocean covers over 70% of the planet and produces at least 50% of the planet’s oxygen. It drives our weather and climate, is home to most of earth’s biodiversity and is the main source of protein for more than a billion people around the world.  The “blue economy,” which is estimated at US$ 3-6 trillion/year, accounts for more than three quarters of world trade and providing livelihoods for over 6 billion people. 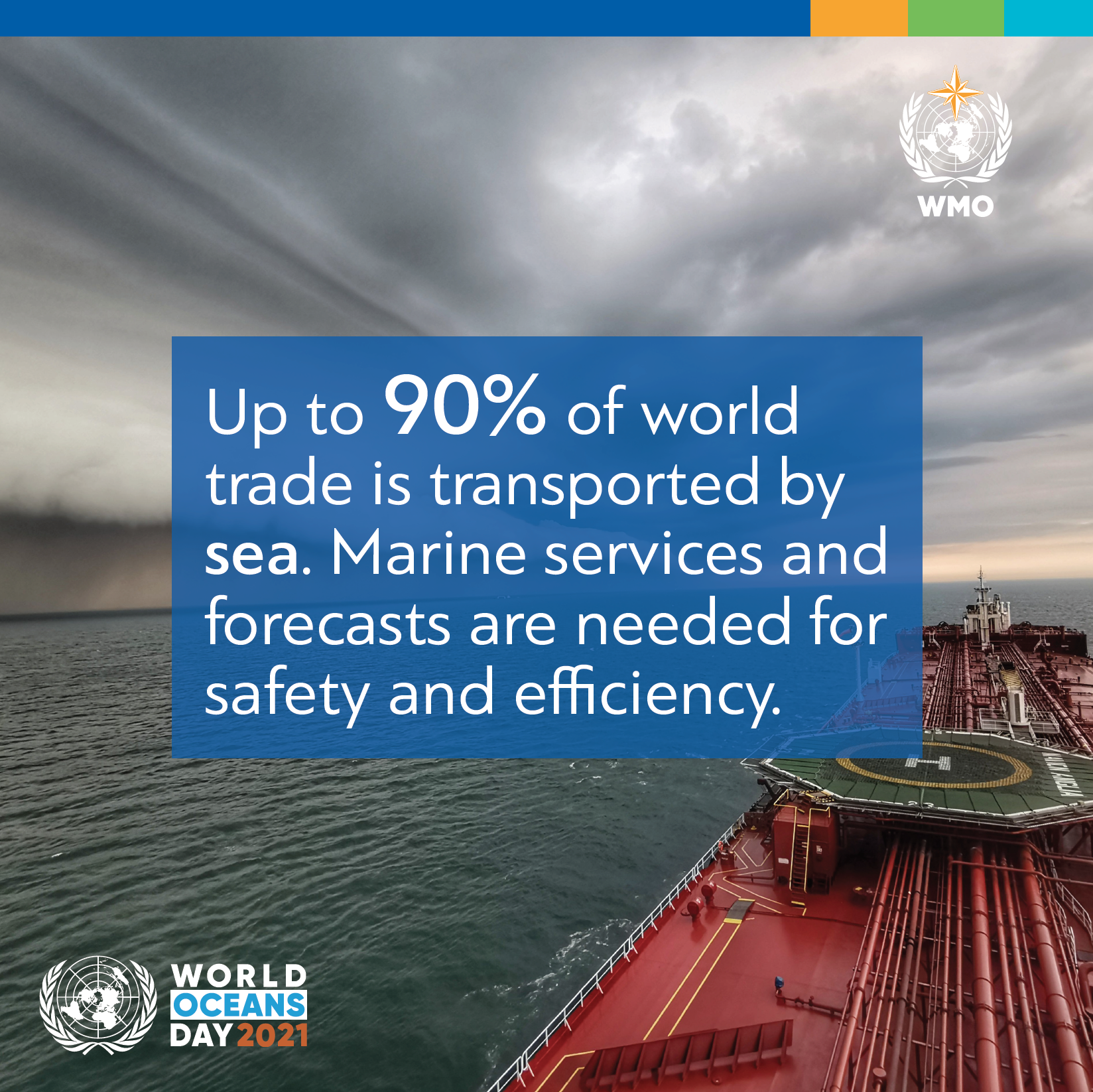 “The Ocean: Life and Livelihoods” is the theme for this year’s World Oceans Day on 8 June.

“We have a once in a generation opportunity and responsibility to correct our relationship with the natural world – including the world’s seas and oceans,” said United Nations Secretary-General António Guterres in a message.

The World Meteorological Organization celebrates the ocean theme for the second time this year as the Ocean, Our Climate and Weather was also the theme of World Meteorological Day on 23 March, which included a dedicated ‘ocean’ issue of the WMO Bulletin as a formally endorsed WMO contribution to the UN Decade of Ocean Science for Sustainable Development (2021 to 2030).

WMO World Oceans Day activities also feature the new WMO video, narrated by UN Ocean Envoy, Ambassador Peter Thomson, highlighting the vital role of the ocean in our interconnected world, the increasing impact of climate change, and the need for better ocean services, science and observations to protect lives at sea and in coastal areas. This will be shown within the UN’s Virtual World Ocean Day Ceremony.

WMO has also launched a new Ocean page: an easy access point from which to learn of the various ocean activities that WMO is working across, to support Members. 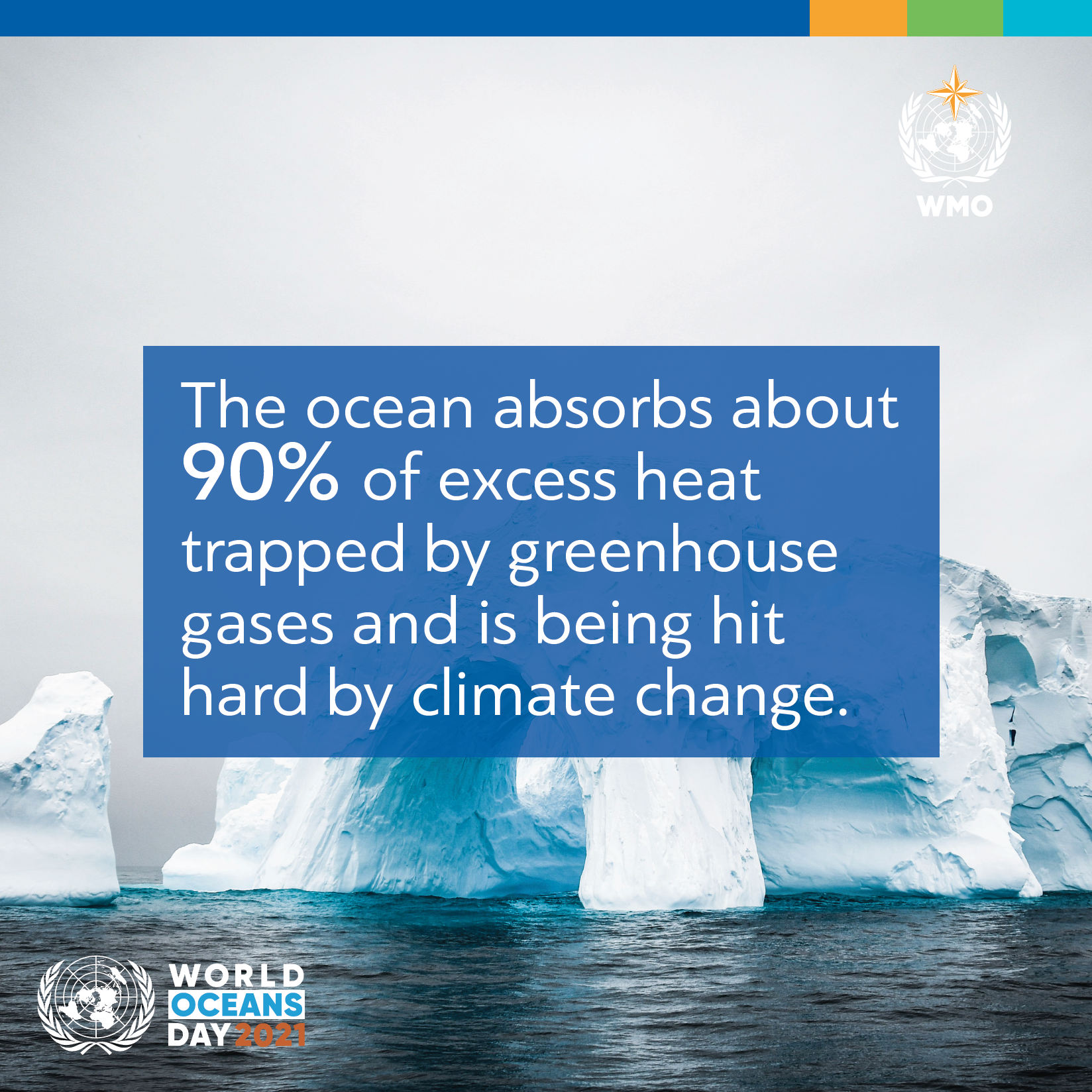 WMO’s report on the State of the Global Climate 2020 highlighted the growing stress on the ocean as a result of climate change.  The ocean absorbs around 23% of the annual emissions of anthropogenic CO2 into the atmosphere and acts as a buffer against climate change. However, the CO2 reacts with seawater, lowering its pH and leading to ocean acidification. This in turn reduces its capacity to absorb CO2 from the atmosphere. Ocean acidification and deoxygenation have continued, impacting ecosystems, marine life and fisheries.

The ocean also absorbs more than 90% of the excess heat from human activities. 2019 saw the highest ocean heat content on record, and this trend likely continued in 2020. The rate of ocean warming over the past decade was higher than the long-term average, indicating a continued uptake of heat trapped by greenhouse gases.

Global mean sea level has risen throughout the satellite altimeter record (since 1993). It has recently been rising at a higher rate partly due to the increased melting of the ice sheets in Greenland and Antarctica. Overall, global mean sea level continued to increase in 2020.

Sea ice is melting, with profound repercussions for the rest of the globe, through changing weather patterns and accelerating sea level rise. In 2020, the annual Arctic sea ice minimum was among the lowest on record, exposing Polar communities to abnormal coastal flooding, and stakeholders such as shipping and fisheries, to sea ice hazards.

In his opening address at the at the UN Ocean Conference High Level Debate on 1 June, Ambassador Thomson emphasized the importance of the ocean and climate science of the WMO and Intergovernmental Panel on Climate Change.

“The Ocean is acidifying at the fastest rate in the history of the planet. It will be extremely difficult, if not impossible, for many Ocean ecosystems and species to adapt to such rapid change,” said Ambassador Thomson. “The Ocean’s massive contribution to required mitigation and adaptation in the face of Climate Change and Biodiversity loss is readily at hand; but if we wish to receive those benefits, henceforth protecting its well-being must be at the centre of considerations,” he said. 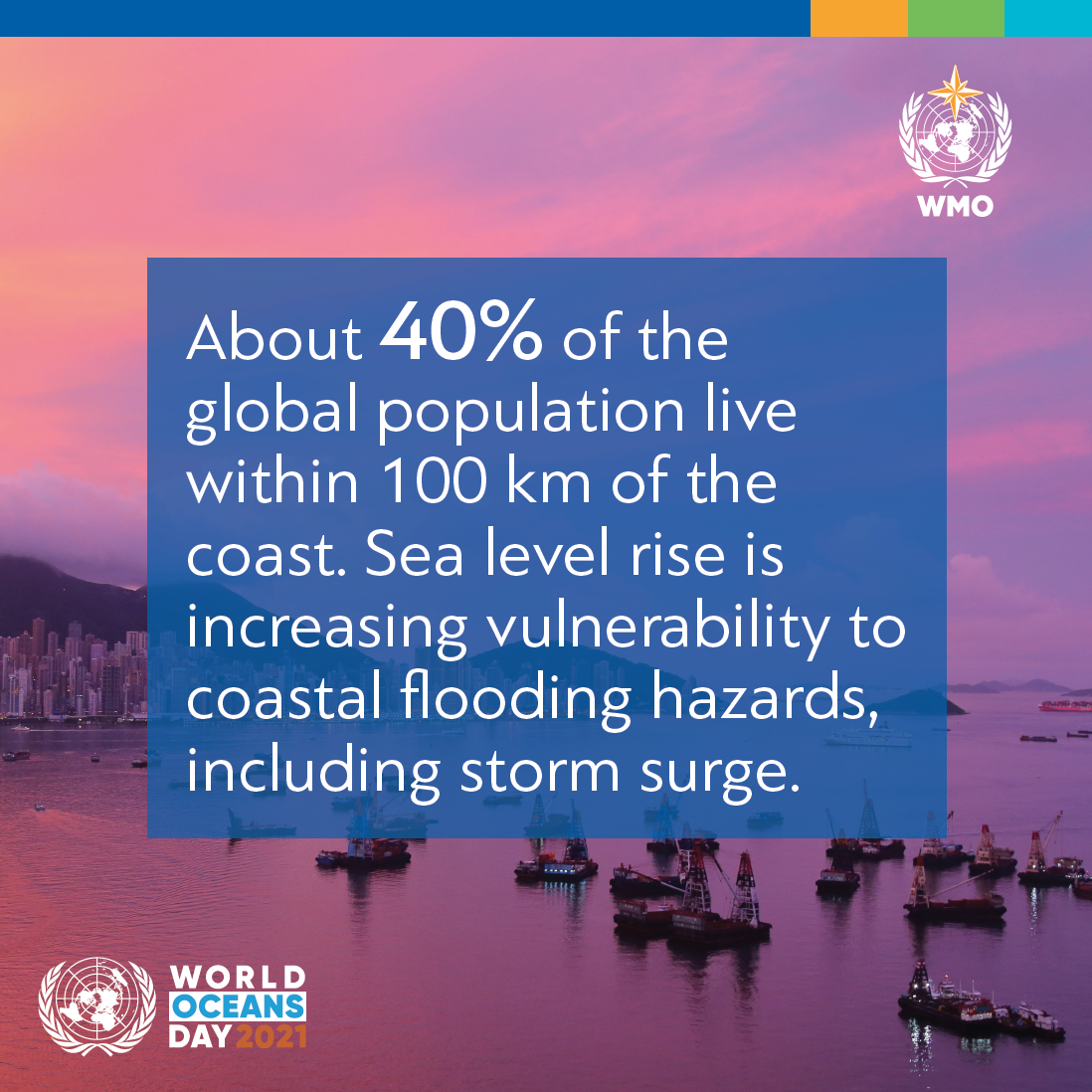 Warm ocean temperatures helped fuel a record Atlantic hurricane season in 2020 are are expected to contribute to another active season in 2021.

The threat posed by intense tropical cyclones was highlighted once again by the very powerful Cyclone Tauktae, which struck India’s west coast in May and killed more than 100 people – including sailors on a barge at sea. Many thousands of people were evacuated from the fury of the approaching storm, at a time when India was reeling from the impact of COVID-19.

These tragic incidents highlight the pressing need for better information, communication and preparedness measures for mitigating the impact of marine hazards. This was the focus by the WMO and International Maritime Organization (IMO) for their First Joint International Symposium on Extreme Maritime Weather for Safety of Life at Sea, in 2019.  Preparations are underway for continued action at the 2nd  Symposium, to be hosted by Indonesia’s BMKG.

WMO works with partners like the IMO and International Hydrographic Organization (IHO) in support of the International Convention for Safety of Life at Sea (SOLAS), which was adopted two years after the sinking of the Titanic in 1912. 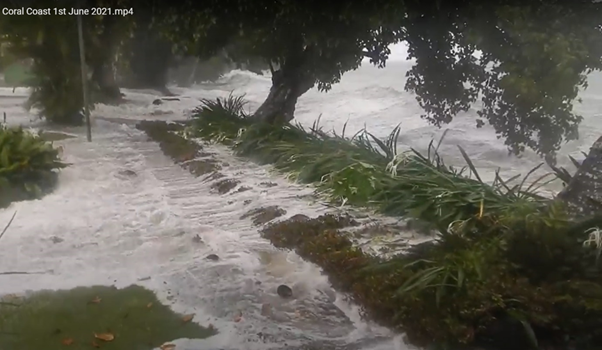 Marine services also include met-ocean support for emergencies such as Search and Rescue operations, and environmental, such as oil and chemical spills, as highlighted within the last year by accidents in the Indian Ocean near Mauritius and Sri Lanka.

Given that about 40% of the global population live within 100 km of the coast, there is also a dire need to protect communities from coastal hazards, such as waves, storm surge, swell and sea level rise, through improved Multi Hazard Early Warning Systems and impact-based forecasts.

WMOs coastal inundation forecasting initiative is helping these efforts as demonstrated last week during a massive swell event that hit Fiji on May 31 and June 1. Using the models operational since 2019 (as part of the Coastal Inundation Forecasting Project facilitated by WMO and funded by the Korea Meteorological Administration), the Fiji Meteorological Service issued damaging swell alerts and warnings. These were heeded and fortunately no lives were lost.

Technological advances are revolutionizing our ability to systematically monitor the ocean and thus understand its role in weather and climate.

Much of the information underlying such marine, weather and climate predictions comes from globally-coordinated ocean basin scale observing systems, both satellite and in situ. These include better observation and forecasting of waves, currents, sea level, water quality and the abundance of living marine resources.

WMO works closely with UNESCO’s Intergovernmental Oceanographic Commission and other partners, to advance the Global Ocean Observing System.  But big geographical and research gaps remain in the observing system, which is struggling to meet rising demand for forecasts and services. The need for expansion of a global ocean observing system, funded and designed to meet the requirements of users, is clear and urgent.

There is a need to support new technologies and the development of autonomous observing instruments, to promote research and to ensure the sharing of timely and accessible data and information.

With the start of the UN Decade in 2021, WMO is committed to the “safe ocean”, “predicted ocean” and ”transparent ocean” goals.  Submissions involving WMO’s co-sponsored entities - WCRP, GOOS and OceanOps - have been formally endorsed as Decade activities, announced today for World Ocean Day. Continued focus on the regions is a priority, especially highlighted during the recent Ocean events in the RAIII and RAIV.  Despite postponement of the 2nd UN Ocean Conference due to COVID, WMO remains engaged in the preparatory process, including the High Level online discussions held on June 1. WMO has also been appointed a Nominating Agency for The Earthshot Prize: the most prestigious global environment prize in history. Ideas for submissions are encouraged, especially for the ocean and climate Earthshots – please contact earthshotprizeinfo@wmo.int.