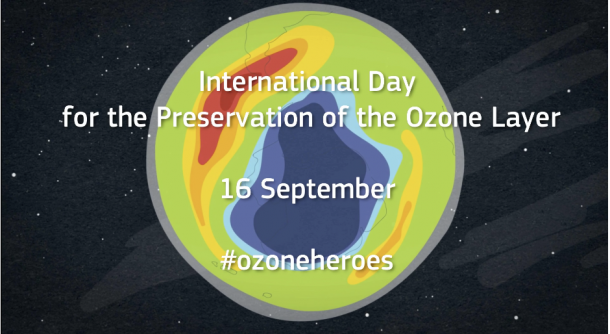 “Keep Cool and Carry on” is the theme of this year’s International Day for the Preservation of the Ozone Layer. It celebrates the progress in protecting the ozone layer and moves to  phase out ozone depleting chemicals which are also potent greenhouse gases.

September 16 marks the anniversary of the Montreal Protocol on Substances that Deplete the Ozone Layer. Hailed as an example of exceptional international cooperation for the protection of the ozone layer, the Montreal Protocol expanded in October 2016 with the addition of the Kigali amendment. This amendment mitigates the impact on the Earth’s climate by substitutes of ozone depleting substances that are powerful greenhouse gases.

“This has been a year of record-breaking heat around the world. It is also a pivotal time for climate action. As we address this threat, we can draw inspiration from the Montreal Protocol, a shining example of how the world can come together for people and planet,” said UN Secretary-General António Guterres in a message.

“When science showed us that chlorofluorocarbons (CFCs) and other substances were tearing a hole in the ozone layer that protects all life on earth, the world responded with determination and foresight by banning them. Thanks to this global commitment, the ozone layer is expected to return to its 1980 levels by mid-century,” he said.

The Montreal Protocol came into being 31 years ago in response to evidence that chlorofluorocarbons (CFCs) and other ozone-depleting substances – used in aerosols, cooling and refrigeration systems, and many other items – were destroying the protective barrier from the sun’s UV rays.

“A number of recent studies, as well as international reports on ozone trends indicate that ozone levels in the Antarctic ozone hole and in the upper stratosphere of the northern hemisphere are increasing. In the Antarctic, several studies have reported total ozone increases since 2000 in early spring. While the ozone hole has reappeared in 2018, findings now show that on average, ozone holes are less deep and less extensive than since the period around the year 2000,” said the International Ozone Commission in a statement to mark the international day.

Under the Protocol, nations commit to slashing the production and use of these substances, which are also greenhouse gases and so major contributors to global warming. As a result, the ozone layer is now healing and will return to 1980 levels by mid-century. Up to two million cases of skin cancer may be prevented each year by 2030, and the planet is cooler than it would otherwise have been.

As mandated by the Montreal Protocol, a new Ozone Assessment by WMO and the UN Environment Programme will be released in December 2018. It assesses these signs of ozone layer recovery.

Since the last WMO/UNEP Ozone assessment that was published in 2014, ground-based and satellite data records have been extended, and global datasets now cover several decades for assessing ozone recovery.

Details on the Ozone Secretariat are here.

ECMWF Copernicus page on monitoring the ozone layer is here