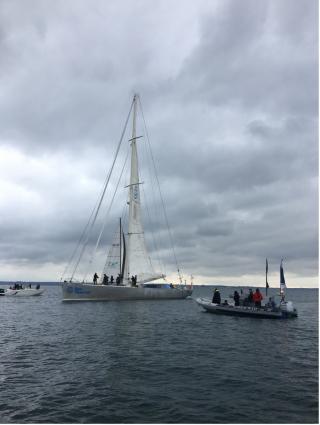 For the first time, a sailboat loaded with dozens of measuring instruments, will sail the Atlantic Ocean to replenish the global Argo profiling floats in hard-to-reach locations. This will contribute to the real-time observation and stewardship of the Ocean, with a minimal carbon footprint.

On November 14, the S/V Iris left Brest, in Brittany, on a 12-week mission in support of ocean and climate science under the coordination of OceanOPS, which is co-sponsored by WMO and and the Intergovernmental Oceanographic Commission (IOC) of UNESCO. 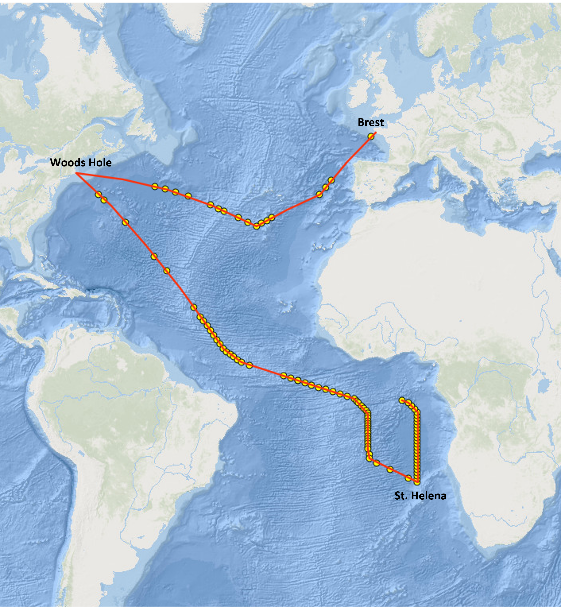 The French Blue Observer team onboard S/V Iris will deploy a total of 100 autonomous measuring instruments, called Argo floats, in remote parts of the Atlantic Ocean which are seldom visited by ships and which therefore need ocean observations. So many floats are on board that the crew and observer team have hardly space to sleep!

Argo profiling floats are autonomous robots that drift with the ocean currents and move up and down between the surface and a mid-water level, collectingpressure, temperature, and salinity profiles from the upper 2 kilometres of the ocean. These instruments are veritable climate sentinels, which support climate science and feed atmospheric forecasting models, vital to understand climate change and predict extreme weather and climate events.

This innovative collaboration was born one year ago during the COVID-19 pandemic, when deployment of Argo floats and other oceanographic instruments by research vessels was deeply impacted by restrictions.

“About 1,000 Argo profiling floats must be deployed every year to sustain the Global Ocean Observing System. Often, they are deployed opportunistically by research ships, but these are very costly, and their trajectories are tied to specific missions and are not able to fill all the gaps or work in all seasons. Collaborations with citizens allows us to reach remote and not yet well sampled areas of the ocean, filling critical observational gaps,” says Mathieu Belbéoch, Manager of OceanOPS.

Dominique Berod, Head of the Earth Monitoring Division at WMO, says: “Observations are key to our understanding of how the complex Earth system – the atmosphere, oceans, freshwater bodies, land, and the biosphere – shapes our weather, climate and hydrology. Data are the start of all our knowledge, and ocean observations are crucial to support essential services needed by all sectors of society, as they face challenges, such as climate change and increasing frequency and impact of extreme weather.”

“In the face of a changing climate, and on the wave of COP-26 in Glasgow, now more than ever, ocean observations are needed for improving the understanding and predictions of weather, climate and ocean conditions. The WMO thanks all those involved in this expedition - wonderful example of international collaboration in science for sustainable development”, adds Sarah Grimes, Head of Marine Services at WMO. 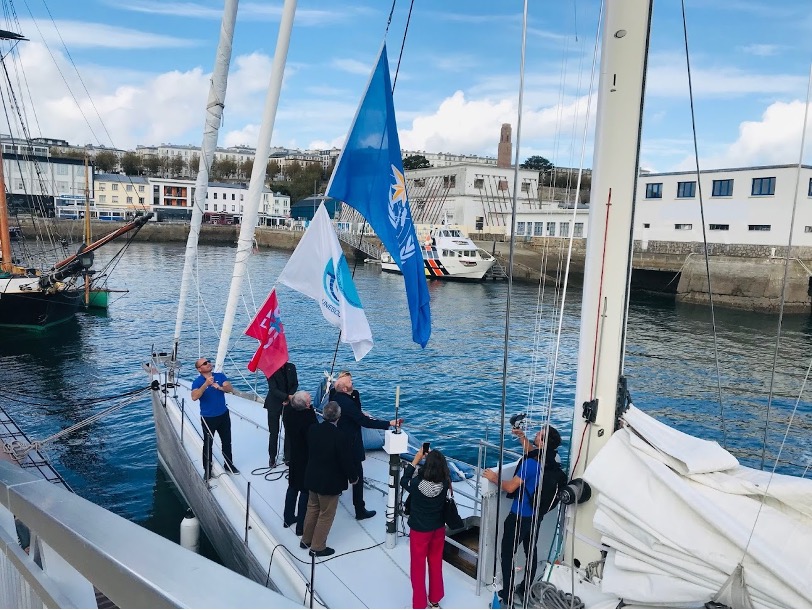 The 3-month oceanographic expedition was launched from the Brest harbour, where the Euro-Argo ERIC Team - in charge of the European contribution to the Argo program - coordinated the ship loading with 17 European Argo floats. The instruments, provided by the Ifremer Institute in France, the Royal Meteorological Institute (KNMI) in the Netherlands, and the Federal Maritime and Hydrographic Agency (BSH) in Germany, will be deployed en route to the United States.

“This is a first innovative experience for the Argo Program to coordinate such an operation of floats deployment from a single vessel throughout the Atlantic, and Euro-Argo ERIC is proud to contribute to it”, says Sylvie Pouliquen, Euro-Argo ERIC Director. “If the operation will be successful, sailing boats could be considered as complementary, low-carbon footprint means, to deploy or recover floats at sea”, add Pouliquen.

After approximately two weeks of transatlantic navigation, the R/V Iris will reach Woods Hole, Massachusetts, in the USA.There, it will be reloaded with an additional 83 US and Canadian floats, for deployment in under-sampled areas of the south Atlantic Ocean, towards the island of St. Helena.

Susan Wijffels, Argo Steering Team co-chair and one of the main partners of the project says: “Argo has revolutionized our ability to ‘see’ into the remote and vast ocean regions, and this is vital for better understanding changing weather and ocean extremes, and how climate will evolve over the next decades. The voyage of Iris will help us track vast regions of the Atlantic over the next few years by replenishing the array there".

The OceanOPS & Blue Observer mission is a pilot for the Ocean Decade Odyssey Project. With this project, OceanOPS aims at enhancing 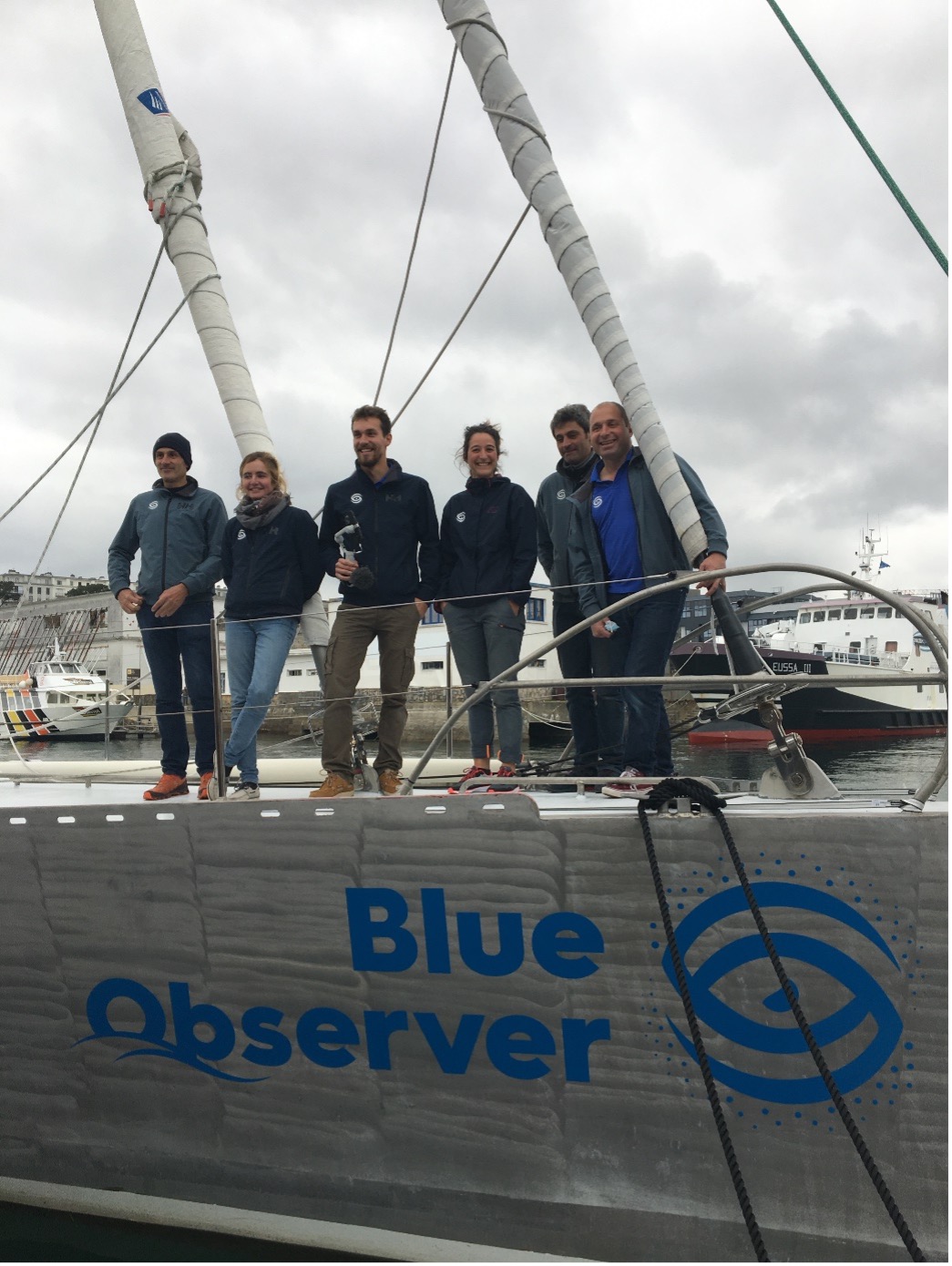 “We urgently need targeted increases in observations, and support from a broader range of actors from private and public sectors, and increased collaboration,” says Emma Heslop, GOOS Project Office. “That is why I am really delighted to support this mission, which embodies the level of response we need to face climate change, for ocean and planet health”.

One of the challenges of the Odyssey Project is to ensure that ocean data and information are timely delivered and freely accessible to all users. This challenge is in line with the recently endorsed WMO Unified Data Policy Resolution, assessing the free and unrestricted exchange of observational data from all parts of the world, and it is one of the pillars of the OceanOPS & Blue Observer mission.

The R/V Iris has a great track record in circumnavigations. The yacht holds the record for the round-the-world trip in reverse: 122 days, 14 hours, and 49 seconds, set in 2014. In 2007, it sailed around the Antarctic from East to West against prevailing winds, with the famous French sailor Maud Fontenoy. After renovation, the yacht is fully equipped with numerous scientific materials, and hosts a 7 crew, including 4 sailors, 1 engineer, 1 scientist and 1 media person.

OceanOPS is a joint centre of the World Meteorological Organization (WMO). It is the international hub and centre of excellence that provides vital services in monitoring, coordinating, and integrating data and metadata, across an expanding network of global oceanographic and marine meteorological observing communities.