​Early Warning systems must protect everyone within five years 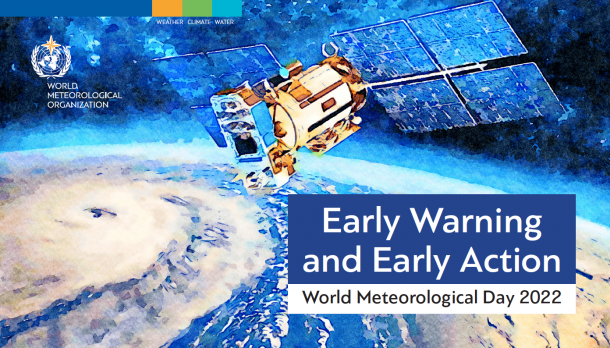 ​Early Warning systems must protect everyone within five years

Within the next five years, everyone on Earth should be protected by early warning systems against increasingly extreme weather and climate change, according to an ambitious new United Nations target announced today.

UN Secretary-General António Guterres has tasked the World Meteorological Organization (WMO) to lead the effort and present an action plan to achieve this goal at the next UN climate conference in Egypt this November.

The announcement was made on World Meteorological Day on 23 March, which this year has the theme Early Warning and Early Action.

“Human-caused climate disruption is now damaging every region. The most recent report of the Intergovernmental Panel on Climate Change details the suffering already happening. Each increment of global heating will further increase the frequency and intensity of extreme weather events,” said Mr Guterres.

“We must invest equally in adaptation and resilience. That includes the information that allows us to anticipate storms, heatwaves, floods and droughts,” said the UN chief.

However, one-third of the world’s people, mainly in least developed countries and small island developing states, are still not covered by early warning systems.  In Africa, it is even worse: 60 per cent of people lack coverage.

“This is unacceptable, particularly with climate impacts sure to get even worse,” said Mr Guterres. 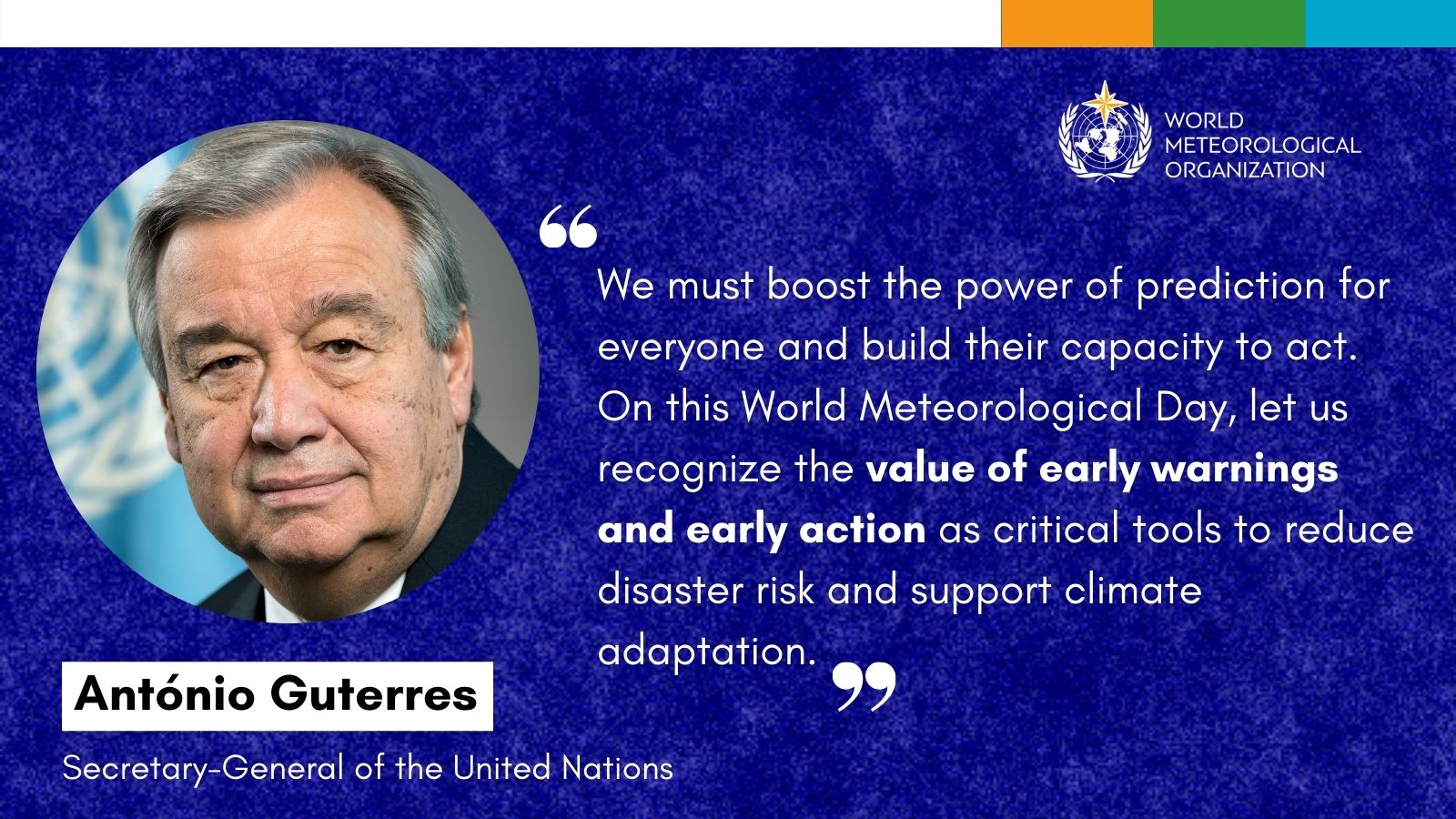 “Early warnings and action save lives. To that end, today I announce the United Nations will spearhead new action to ensure every person on Earth is protected by early warning systems within five years.  I have asked the World Meteorological Organization to lead this effort and to present an action plan at the next UN climate conference, later this year in Egypt,” Mr Guterres said in a video message to the World Meteorological Day ceremony.

“We must boost the power of prediction for everyone and build their capacity to act. On this World Meteorological Day, let us recognize the value of early warnings and early action as critical tools to reduce disaster risk and support climate adaptation.”

Climate change is already very visible through more extreme weather in all parts of the world. We are seeing more intense heatwaves and drought and forest fires. There is more water vapor in the atmosphere, which leads to extreme rainfall and deadly flooding. The warming of the ocean fuels more powerful tropical storms and rising sea levels increase the impacts.

Over the past 50 years (1970-2019), a weather, climate or water-related disaster has occurred on average every day – taking the lives 115 people and causing US$ 202 million in losses daily, according to a 2021 WMO report on disaster statistics.

The number of recorded disasters increased by a factor of five over that 50-year period, driven by human-induced climate change, more extreme weather events and improved reporting.

Thanks to better warnings, the number of lives lost decreased almost three-fold over the same period because of better weather forecasts and proactive and coordinated disaster management.

“The growing number of disasters due to climate change is endangering implementation of a large number of Sustainable Development Goals. Besides very critical mitigation it is growingly important to invest in climate adaptation. One of the highest returns of investments is reached by improving the weather, water and climate early warning services and related observing infrastructures. There is a need to invest US$ 1.5 billion during the coming five years to improve the quality of the services and related infrastructures especially in the LDC and SIDS countries,” said WMO Secretary-General Prof. Petteri Taalas.

What is an Early Warning System?

An Early Warning System for floods, droughts, heatwaves or storms, is an integrated system which allows people to know that hazardous weather is on its way, and informs how governments, communities and individuals can act to minimize the impending impacts.

These systems allow us to monitor the real time atmospheric conditions on land and at sea and to effectively predict future weather and climate events using advanced computer numerical models. The aim is to understand what risks the foreseeable storms could bring to an area that will be affected – which may differ if it is a city or rural area, polar, coastal or mountainous regions. Early warning systems must include agreed response plans for governments, communities and people, to minimize anticipated impacts. A comprehensive early warning system must also include lessons learned from past events, in order to continually improve responses ahead of future weather, climate, water and related environmental hazards. 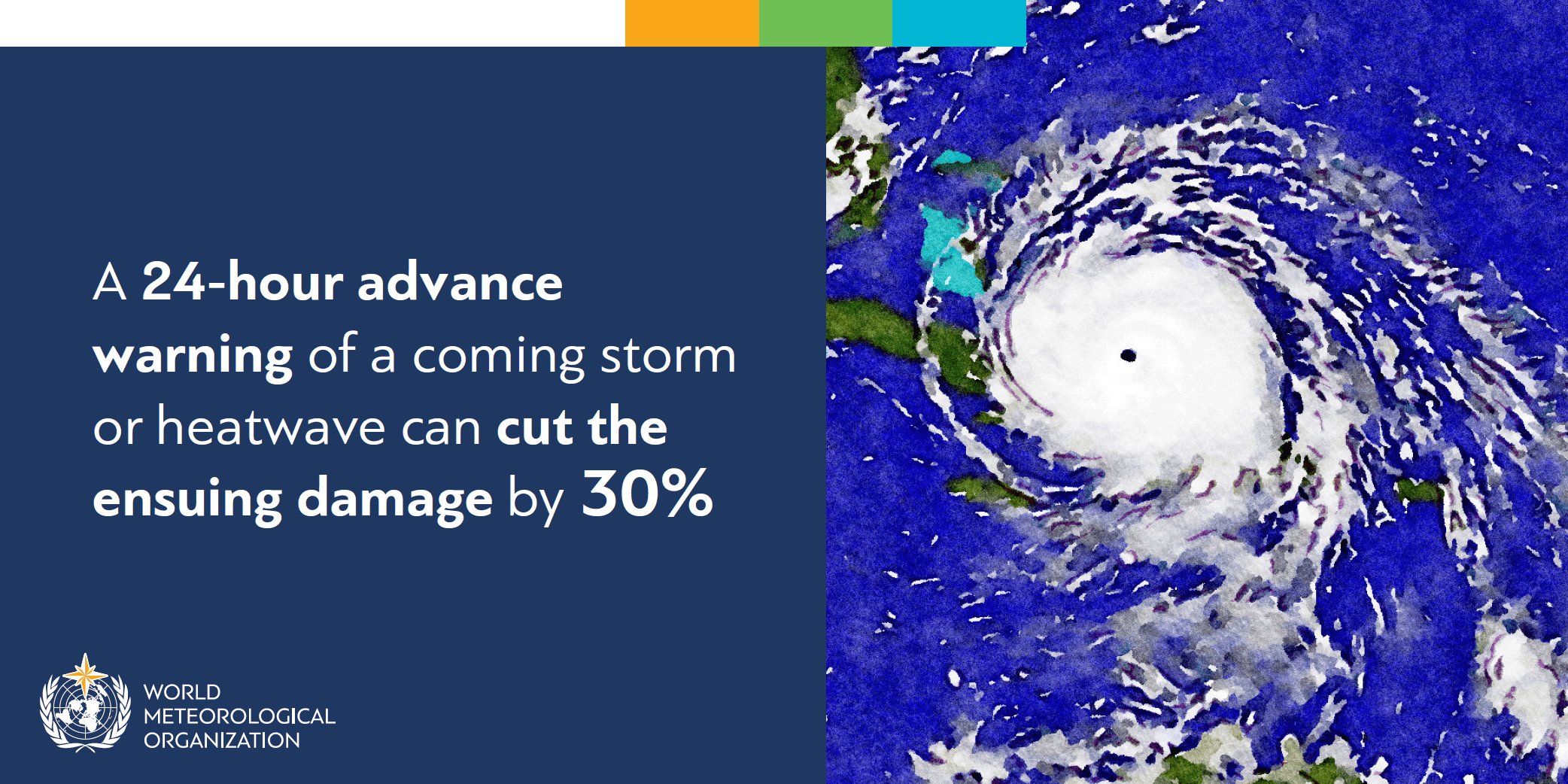 The 2019 Global Commission on Adaptation flagship report ‘Adapt Now’ found that Early Warning Systems provide more than a tenfold return on investment – the greatest of any adaptation measure included in the report.

The report also found that just 24 hours warning of a coming storm or heatwave can cut the ensuing damage by 30 per cent and spending US$ 800 million on such systems in developing countries would avoid losses of $3-16 billion per year.

And yet, despite these known great benefits, one in three people globally is still not covered by early warning services, and the proportion of people not covered is almost twice as high in Africa. Vulnerable people are disproportionately affected.

The Glasgow Climate Pact (agreed at the UN Climate Change Conference COP26 in November 2021) emphasizes the urgency of scaling up action to enhance adaptive capacity, strengthen resilience and reduce vulnerability to climate change. It also urges developed countries to urgently and significantly scale up their provision of climate finance, technology transfer and capacity-building for adaptation.

The UK government, which was president of COP26, and the Egyptian government, which will preside over COP27 in Sharm-El-Sheikh, recently renewed calls on developed countries to follow through on their commitment to at least double their climate finance for adaptation to developing countries by 2025, aiming at achieving balance between funding adaptation and mitigation.

Ambassadors of both the UK and Egypt are due to speak at the World Meteorological Day ceremony, which included high level panels of speakers illustrating the need for, and success of, early warnings and early action.

WMO will spearhead the effort to achieve universal coverage of early warning services, in close collaboration with key partners as a collective contribution towards global adaptation efforts.

It will seek to close observation gaps, to expand the capacity for all countries to issue warnings ahead of a disaster, and simultaneously improve their capacity to act on those warnings, and to respond in a manner that is people-centred, inclusive and accessible.

Following on from Mr Guterres’ announcement, WMO will convene key agencies, countries and groups already active in the field of Hydromet and Risk Informed Early Warning capacity development to build on the excellent existing efforts and create a global plan by COP27. Closing the early warning gap will require inputs from actors throughout the entire early warning to early action value chain.

The new plan seeks to build on existing WMO activities and partnerships.