2015 is hottest year on record

2015 is hottest year on record

Geneva 25 January 2016 (WMO) - The global average surface temperature in 2015 broke all previous records by a strikingly wide margin, at 0.76±0.1° Celsius above the 1961-1990 average. For the first time on record, temperatures in 2015 were about 1°C above the pre-industrial era, according to a consolidated analysis from the World Meteorological Organization (WMO).

WMO combines three internationally-renowned observational datasets with those from sophisticated reanalysis systems. As such it provides the most authoritative international reference source

Fifteen of the 16 hottest years on record have all been this century, with 2015 being significantly warmer than the record-level temperatures seen in 2014. Underlining the long-term trend, 2011-15 is the warmest five-year period on record.

The record temperatures over both land and the ocean surface in 2015 were accompanied by many extreme weather events such as heatwaves, flooding and severe drought.

"An exceptionally strong El Niño and global warming caused by greenhouse gases joined forces with dramatic effect on the climate system in 2015," said WMO Secretary-General Petteri Taalas. "The power of El Niño will fade in the coming months but the impacts of human-induced climate change will be with us for many decades."

"We have reached for the first time the threshold of 1°C above pre-industrial temperatures. It is a sobering moment in the history of our planet, " said Mr Taalas. " If the commitments made during the climate change negotiations in Paris and furthermore a higher emission reduction ambition level is reached, we still have chance to stay within the maximum 2°C limit," said Mr Taalas.

"Climate change will have increasingly negative impacts for at least the next five decades. This emphasizes the need to invest in adaptation besides mitigation. It is important to strengthen the capability of countries to provide better disaster early warnings to minimize human and economic losses. Climate change increases the risk of weather related disasters which are an obstacle to sustainable development," he said.

The WMO global temperature figure is principally derived from datasets maintained by the Hadley Centre of the UK’s Met Office and the Climatic Research Unit, University of East Anglia, United Kingdom (HadCRUT4); the US National Oceanic and Atmospheric Administration (NOAA) National Centers for Environmental Information; and the Goddard Institute of Space Studies (GISS) operated by the National Aeronautics and Space Administration (NASA). The WMO also draws on information from reanalysis systems, which use a weather forecasting system to combine many sources of data to provide a more complete picture of global temperatures, including in Polar regions. WMO takes data from the reanalyses produced by the European Centre for Medium-Range Weather Forecasts.

The HadCRUT4, NOAA and NASA datasets all showed that 2015 was the warmest year, as did the ECMWF reanalysis.

WMO uses 1961-1990 as the internationally agreed base period for measuring long-term climate change.  The average global temperature during that period was 14°C.

The global temperature data set of the UK's Met Office goes back to 1850, and those of NOAA and NASA to 1880. 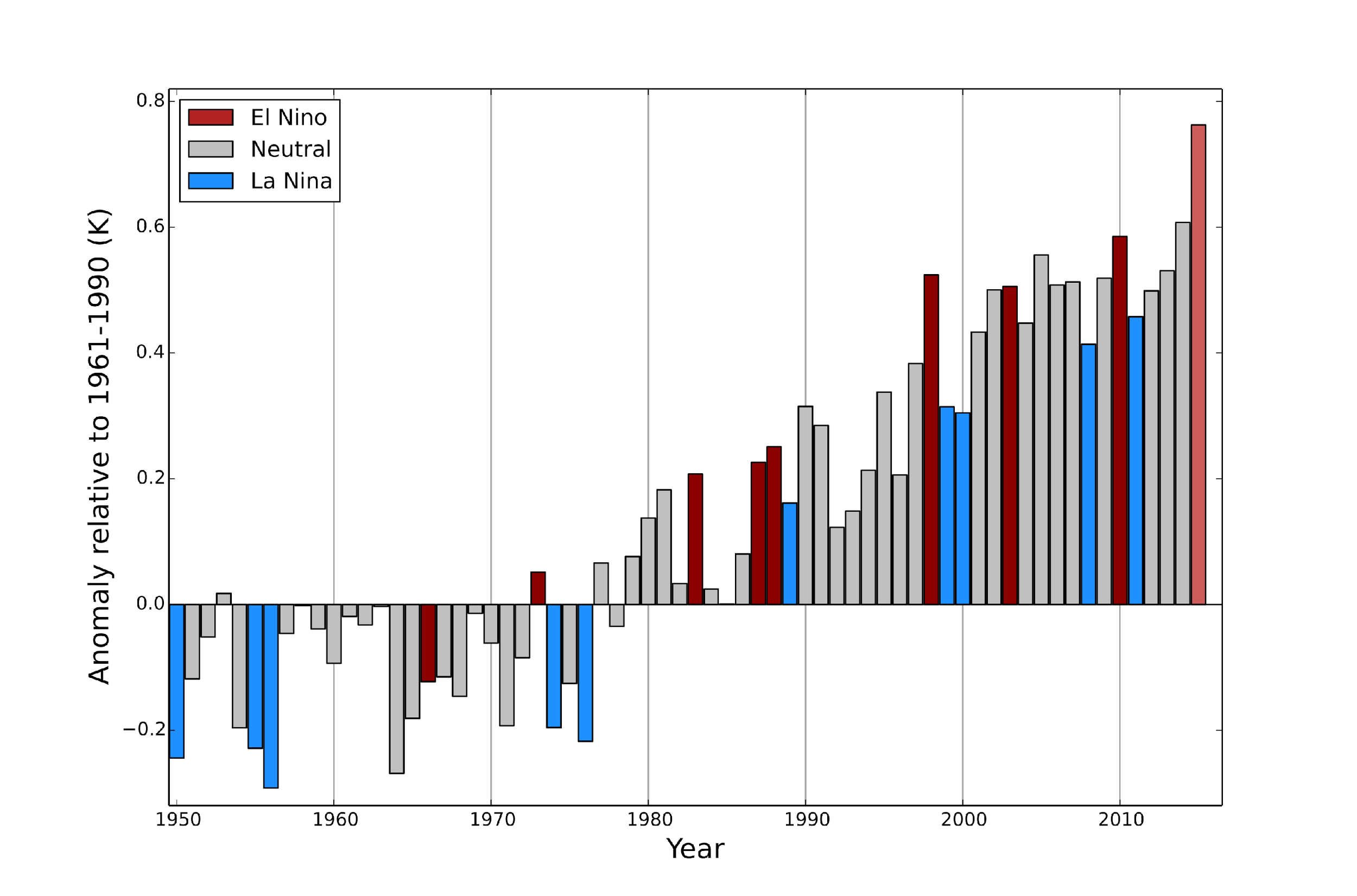 Global annual average temperatures anomalies (relative to 1961-1990) based on an average of three global temperature data sets (HadCRUT.4.4.0.0, GISTEMP and NOAAGlobalTemp) from 1950 to 2015. Bars are coloured according to whether the year was classified as an El Niño year (red), a La Niña year (blue) or an ENSO-neutral year (grey). Note uncertainty ranges are not shown, but are around 0.1°C. 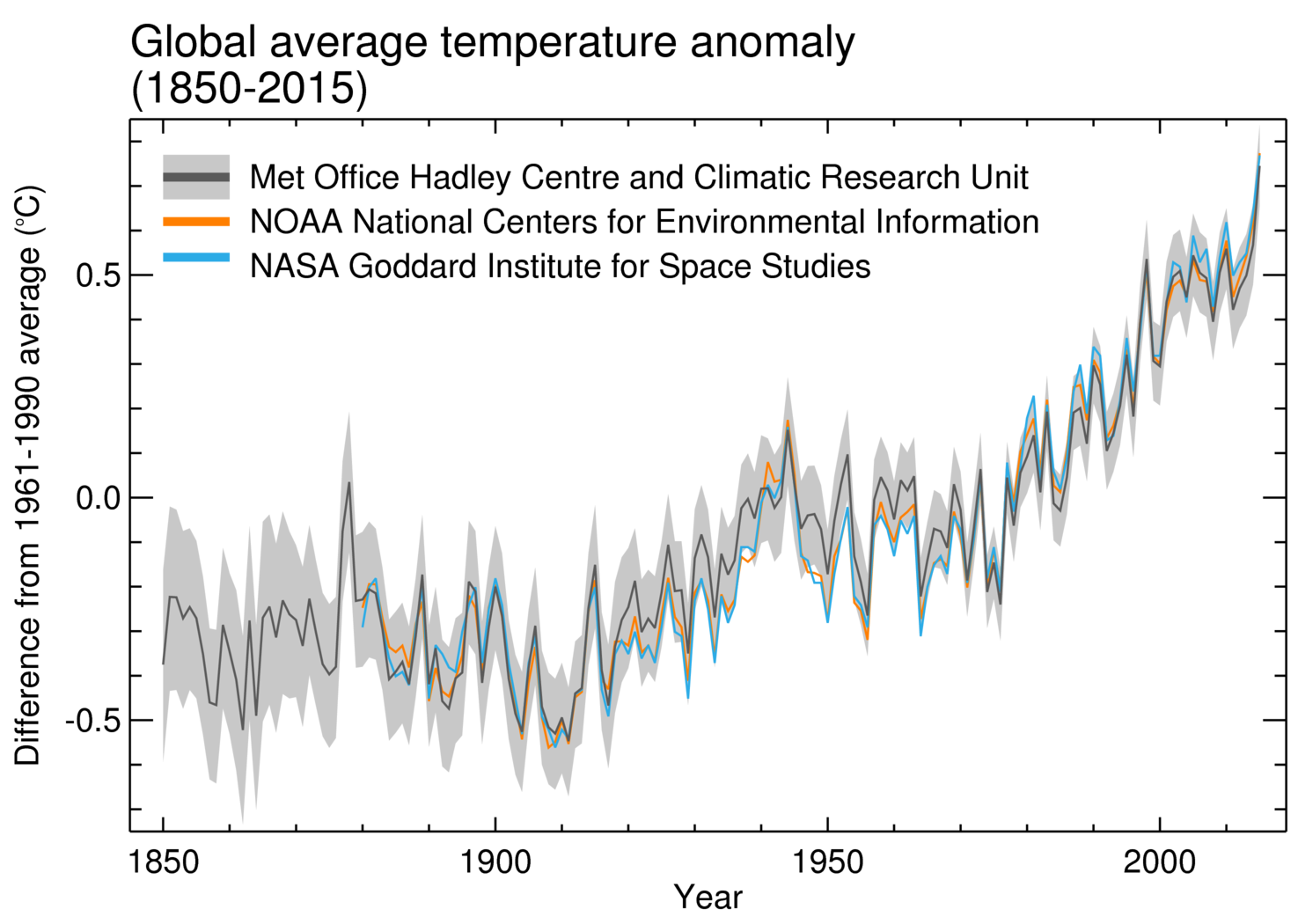 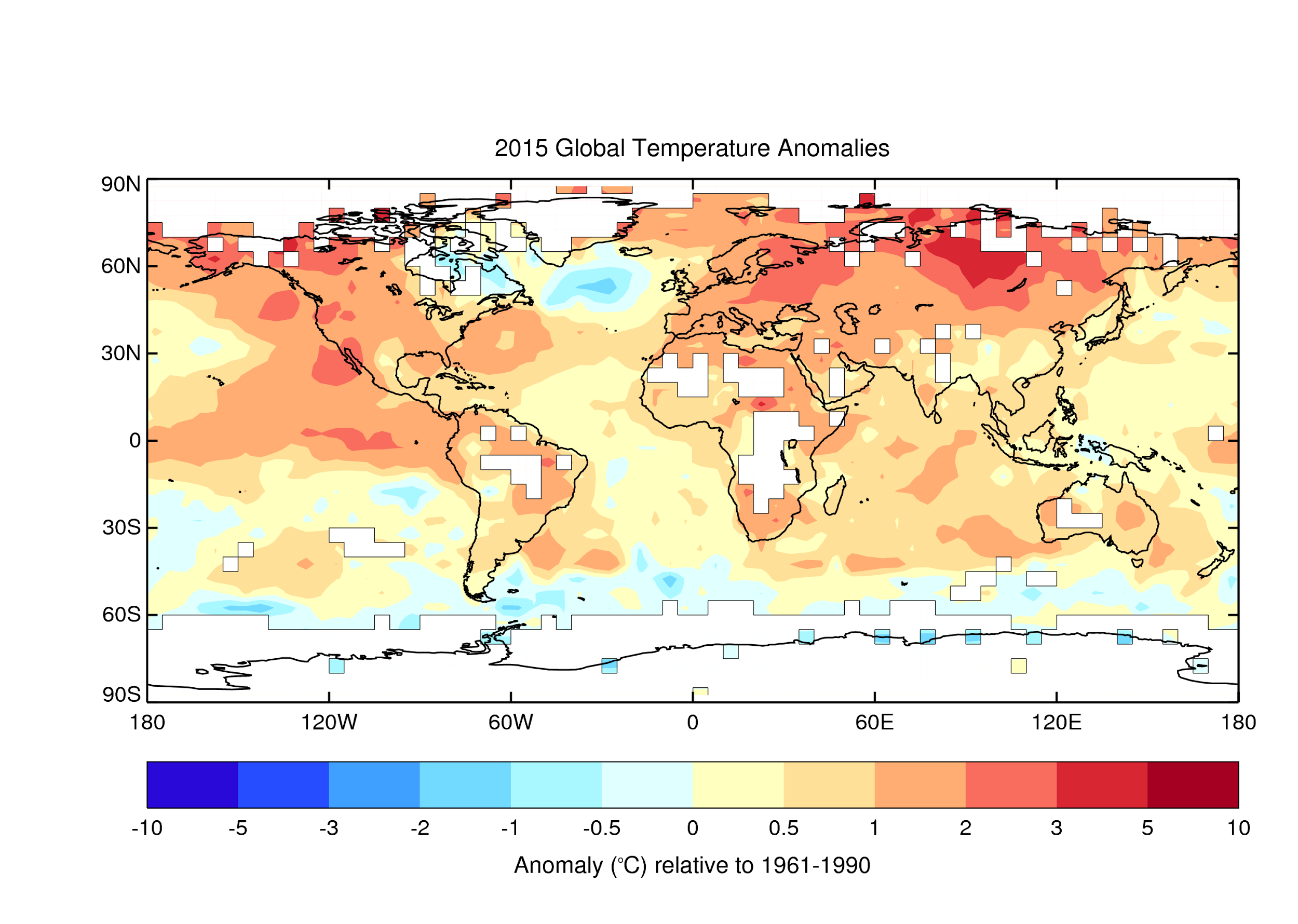