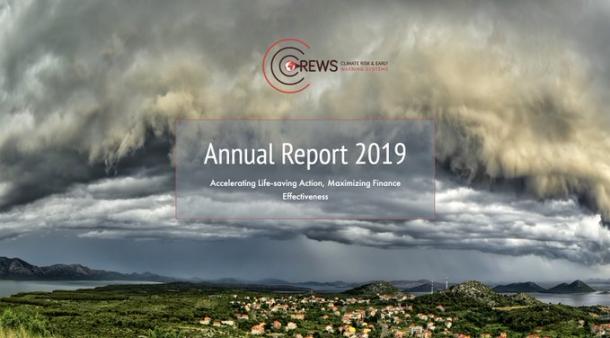 As the world continue to manage the deadly Covid-19 virus and looks at ensuring that the recovery addresses climate change threats, the significance of advanced multi-hazard threat warnings and risk information has never been more widely acknowledged. This is highlighted in the 2019 Annual Report of the Climate Risk & Early Warning Systems (CREWS) initiative, released today jointly by the World Meteorological Organization (WMO), the World Bank Group / Global Facility for Disaster Reduction and Recovery (GFDRR), and the United Nations Office for Disaster Risk Reduction (UNDRR).

The 2019 Annual Report of the Climate Risk & Early Warning Systems outlines the cooperative actions taken by WMO, The World Bank / GFDRR and UNDRR in the past year to save lives and livelihoods through the advancement of early warning systems with CREWS support. To date, the CREWS Trust Fund has delivered over US$ 43 million in project funding and mobilized an additional US$ 270 million from public funds of other development partners – realizing accelerated life-saving action and maximized finance effectiveness.

In 2019, CREWS support was scaled up to 44 least developed countries and small island developing states. Through this work, more than 10 million people in some of the world’s most vulnerable communities now have access to better early warning services.

The report was presented to Member States by François Rivasseau, Ambassador, Permanent Representative of France to the United Nations in Geneva. The governments of Australia, France, Germany, Luxembourg, Netherlands, Switzerland and the United Kingdom have contributed a total of US$ 55 million to the pooled CREWS Trust Fund. Canada supports CREWS objectives through US$ 8 million in additional funds to WMO for related CREWS activities.

In launching the global report, Rivasseau said, “The CREWS initiative’s work on early warning ensures coherence between different partners, strong ownership by the national institutions and in particular the national meteorological organizations, while ensuring funds are aligned with priority needs”.

Peteri Taalas, WMO Secretary-General, said at the launch, “CREWS is operationalizing important principles for effective early warning systems. As a result, National Meteorological and Hydrological Organizations are working closely with National Disaster Management Offices. Through this approach, early warning systems are informed by risk information, which is important as impact-based warnings inform how to react to a warning so that lives and livelihoods can be saved”.

Mami Mizutori, UN Assistant Secretary-General and Special Representative of the Secretary-General for Disaster Risk Reduction, said of CREWS, “Disasters affect everyone…but not everyone equally. CREWS is a valuable partnership in driving inclusive progress against the global targets of the Sendai Framework”.

The Climate Risk & Early Warning System (CREWS) initiative was established in 2015 at the United Nations Climate Change Conference (COP21) as a financial mechanism  to save lives and livelihoods through the expansion of early warning systems and services in Least Developed Countries and Small Island Developing States.