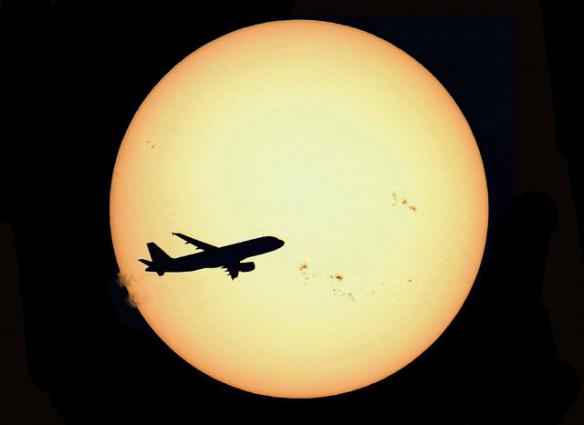 15 November 2017 (WMO) _ A major conference on aviation, weather and climate has developed a blueprint for action to boost scientific support for aviation safety, air navigation efficiency and environmental protection.

The priorities include addressing the current and future impact on aviation operations of extreme weather, climate change, hazardous phenomena such as volcanic ash, space weather and geomagnetic storms.

The Aeronautical Meteorology Scientific Conference took place from 6 to 10 November in Toulouse, France. It was organized by the World Meteorological Organization and co-sponsored by Météo-France, aircraft manufacturer Airbus, and aerospace technology companies Selex ES and Thales. It was attended by more than 230 participants, including world-leading atmospheric science research institutes, meteorological service providers from the public and private sector, airline operators, pilots and other aviation representatives.

“Aviation is one of the most weather-sensitive of all economic sectors. It is also changing rapidly. With air traffic doubling every 15 years, competition increasing and air safety more important than ever, the demand for an expanded array of national and regional weather services is rising,” says Chi-Ming Shun, President of the WMO Commission for Aeronautical Meteorology.

“We need to ensure that the weather services we provide are fit-for-purpose and credible, both now and in the future.  This could only be achieved by intensified collaboration with active engagement between researchers, meteorological service providers, aviation users, regulators and other stakeholders, and this conference has turned out to be a successful collaborative platform.  More data sharing, especially aircraft observations, is also recognized to be essential for verifying, validating and calibrating new weather prediction techniques which will directly benefit the end users,” says Mr Shun.

Three quarters of significant air traffic delays in regions with high traffic density are related to weather and nearly half of aircraft accidents occur during operations in adverse weather. Other challenges include volcanic eruptions and volcanic ash clouds, which are a hazard to aviation.

Climate change may lead to an increase in extreme weather and also influence the demand for air travel. At the same time, concerns need to be addressed about noise and air pollution and the substantial carbon footprint caused by aviation.

“It is expected that this conference will contribute to a common vision for scientific research and development activities aligned with the evolving needs and expectations of international civil aviation,” says Øystein Hov, President of the WMO Commission for Atmospheric Sciences. “It will stimulate special research focusing on how to address identified top priority areas of high impact weather affecting safety and efficiency of aviation, and raise awareness of the potential impacts of climate change on aviation operations today and in the future.”

International civil aviation is embarking on a sweeping modernization programme through to the 2030s that will see significant changes in how meteorological information and services are supplied and used. The overhaul is spearheaded by the International Civil Aviation Organization (ICAO), which envisages a globally interoperable, harmonized air traffic management system.

The Conference provided an overview on the current state-of-the-art and foreseen advances in meteorology science and technology to support aviation, and considered the faster transfer of these advances into operations.

“Aviation has already embarked on a programme of modernization to meet the continuing growing demand for commercial air transportation” said Yong Wang, Chief of Airport Operations and Infrastructure at ICAO. “Meteorological information and services are a key enabling function in this modernization and the continued close collaboration between ICAO and WMO will play a vital role in achieving our objectives” he added.

Graham Rennie of Qantas Airways said that “there is a reliance on WMO and its Members to ensure that the most appropriate, cost efficient and fit-for-purpose technologies are being deployed to meet the users’ need for harmonized, consistent, globalized meteorological information” while Klaus Sievers, representing the International Federation of Airline Pilots’ Associations (IFALPA), added that “the science community should be encouraged through events such as this conference to intensify its work and to communicate the result of their efforts to the pilots”.

A special session dedicated to the impacts of climate change and variability on aviation and associated science requirements was also held during the conference. The conference recognized a need of convergence between the current scientific knowledge and the type of information required by the aircraft industry on how climate change will affect the design and required performance and resilience of aircraft, and how it will affect maintenance cycles and requirements.

“Flights are regularly disrupted by weather conditions such as convection, turbulence, icing, fog, wind, snow and tropical cyclones. But in addition to naturally occurring climate variability, we need to factor human-induced climate change into the equation,” says Dr Herbert Puempel, Co-Chair of a WMO Expert Team on Aviation, Science and Climate.

“How will this affect maximum and minimum temperatures; turbulence; humidity conditions; tropical cyclone paths; and the frequency and intensity of lightning strikes?” he says. “Coastal aerodromes may be increasingly impacted from storm surge aggravated by rising sea levels. And there may increasingly be occasions when it is simply too hot to fly,” says Mr Puempel.

The conference concluded with a series of recommendations on how to plan scientific research activities for the next 15 years in order to meet the needs of the rapidly growing global aviation industry and address the reality of a changing climate.